If you know me at all, you know I am a complete geek for anything related to tabletop roleplaying games. Many people believe the history of tabletop RPGs, as well as war games, began with Gary Gygax’s vision of Dungeons & Dragons in 1974, but this is inaccurate. 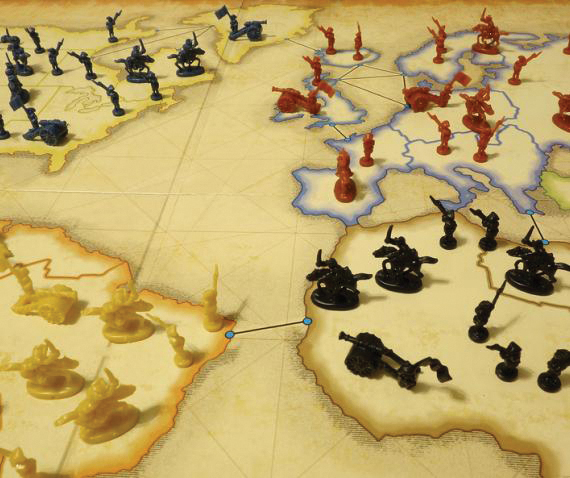 The rules to Kriegsspiel are simple: Win at all costs. Courtesy photo.

Wargaming has been a popular hobby for a long time — from miniature hobbyists creating elaborate dioramas of the American Civil War to young adults dropping stacks of dead presidents on the latest Warhammer 40,000 models. While I spent my heyday at the receiving end of mockery and ridicule for my interest in wargames, the pastime was long enjoyed by kings, generals and the warriors who shaped the modern world as we know it today — for better or worse.

One could argue that it all began with chess, sometime in the 1400s. It is indeed one of the oldest forms of wargaming in history, with pieces representing military units designed to counter other units and complete an objective in a strategic manner. However, chess is hardly reflective of how we view wargames today. No actual battle is fought on grids. Battalions don’t just up and vanish when faced with opposition. A war doesn’t always end when a leader is captured. These were all problems viewed by military officers in the Kingdom of Prussia in the 1800s.

Don’t expect me to try and summarize what the Kingdom of Prussia was in a few hundred words. The best I can give you is: “It was the northern part of the German Empire and the seat of power until the Nazis ruined everything.” In actuality, it was a very complex part of the world with a tumultuous history starting with the Teutonic Knights in the 1400s, a major force during the Napoleonic Wars and eventually World War I, respectively.

If you’re curious about it, head to the library as there are a multitude of nonfiction books and documentaries on the subject.

The first prototype of Kriegsspiel (literally “wargame”) emerged in 1812 and was developed by Prussian nobleman George Leopold von Reisswitz. It was first created using mounds of dampened sand to present topographic maps of battlefields, which proved to be an extremely heavy game to tote around — a problem when members of the kingdom’s military elite were interested in Kriegsspiel and wanted a demonstration from Reisswitz.

At some point, Reisswitz lost interest in developing Kriegsspiel and his son took over the duties. Reisswitz Jr. added features such as units not simply vanishing from the board when they were attacked, instead implementing a rudimentary hit-point system that would go on to be used in games to this day. Dice were also added to the game, allowing for random elements to be introduced that could drastically alter a player’s plan. Although this dice system was extremely convoluted, the use of dice to create an element of randomness to the game is still used in virtually every wargame and tabletop RPG to this day.

The most interesting feature of Kriegsspiel was the umpire. The game was designed to be played with two opponents controlling their respective forces. These commanders wouldn’t move their pieces directly, but instead deliver their orders to the umpire, who would have all of the fun of playing with the miniatures — or porcelain tiles, more often than not.

It was the umpire’s job to enforce the rules, as well as keep track of hidden units and account for the random elements introduced by the dice. If this role is starting to sound familiar, it’s understandable. The umpire was effectively a proto-gamemaster. However, unlike me, the umpire wasn’t a snarky jerk with orange chip dust all over his fingers — umpires were accomplished military commanders with experience leading men. They knew the rules of the battlefield and what needed to be accounted for.

The rules for Kriegsspiel were… overwhelming, to say the least. The lamentations of hobbyist gamers bickering over events in Warhammer would surely appear as children to the Prussian officers in the thick of a bout of Kriegsspiel. Curiously, from an outside perspective, it would appear very silly to watch a number of grown men “playing with toy soldiers,” but Kriegsspiel was shown to have actual value in military education.

At the time of its inception in 1812, the Prussian military was a bit of a joke throughout Europe but, by 1870, it had defeated the French Empire in the Franco-Prussian War — a fact attributed to Prussian officers thinking creatively after incorporating wargaming as a major part of officers’ education.

It’s fun to see how far back a hobby goes, and just how much it has developed in that time. Some of my favorite Youtube channels, such as Real Terrain Hobbies and Tabletop Troubadour Games, display the insane level of intricacy and technique involved with creating lifelike wargame boards, sets and dioramas. Many of these can be created using a 3-D printer, an invaluable tool you have access to through your local libraries in Sandpoint and Clark Fork.

Thinking of creating your own village for D&D, or maybe trying to rebuild an antique Kriegsspiel set with a modern twist? Come visit a librarian and you’ll be winning make-believe wars before you know it.