Each year when Sandpoint natives Laurie and Katelyn Shook come home to play their annual Giving Thanks show at the Panida Theater, they put in work. From self promoting to hiring a stage manager to gathering all the necessary equipment, the Shooks build the show from scratch. In more than one sense, the show is homemade. 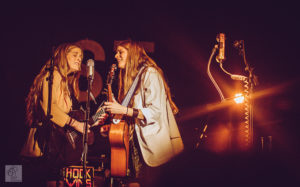 Shook Twins will play at the Panida Theater Nov. 30. Photo by Meleah Shavon.

“It’s our favorite show of the whole year. It’s the show that we put the most of ourselves into, for sure,” Laurie told the Reader. “The more work you put into it, the better the reward in the end, and the reward is always there.”

At the Giving Thanks show — this year slated for Saturday, Nov. 30 — Laurie said that reward comes in the form of her family and friends singing along in the front row.

“I look out at the audience and see my dad dancing down the aisle and it just makes me want to cry,” she said. “When you’re working so hard and you’re stressed out, it’s hard to take it all in and reap the rewards, but at this show, I’m able to do that and take it all in.”

The Shook sisters have been living in Portland for the bulk of their musical career as the aptly named singer-songwriter group Shook Twins. In those years, the band has seen many changes, but with Laurie and Katelyn always the constant factor. Right now, the band is comprised of the sisters and multi-instrumentalist Niko Slice, who Laurie said has added artistry and complexity to the band’s ever developing sound, which lands somewhere in the indie-folk realm.

“We got to play with more badass players and established more of a groove,” Laurie said of their time in Portland. “We have a very distinct groove that is deep within us.”

That groove is evident in the first few seconds of the first track on Shook Twins’ 2019 release Some Good Lives. That opening track, “What Have We Done,” sets the tone for an album rich with signature Shook harmonies and a plethora of personal touches, including samples of the twins’ grandfather playing the piano. Some Good Lives ultimately serves as a tribute to the people who helped shape the Shook sisters — particularly the men.

“We talked a lot about what the album meant and how we wanted to honor the good men in our lives,” Laurie said, reflecting on the album release tour for Some Good Lives earlier this year. “That felt cathartic and good to keep repeating.”

Earlier this month, Shook Twins released thought of a b-side, a five-track EP on which they shared two new originals as well as acoustic versions of three tracks from Some Good Lives: “No Choice,” “Got Your Message” and “WantLove.” Laurie said the band enjoyed sharing a new side of those three songs.

“It’s been cool to dive deeper into that album,” she said.

As for the upcoming Giving Thanks show, Shook Twins will headline a night full of local flair, including fellow Sandpoint native Holly McGarry and her band, Honeysuckle, as well as a “special surprise Sandpoint guest,” according to Laurie. The night will also feature honorary local John Craigie — a longtime friend of the Shooks who seamlessly blends charming stand-up comedy into his musical performances.

“It’s going to be such a nostalgic Sandpoint time,” Laurie said.

Since its inception, the Shooks have used their Giving Thanks show to raise money for a cause, this year choosing a cause both close to home and close to their hearts: the Panida itself. A portion of proceeds from both ticket and merch sales will go toward the theater.

Laurie said both she and her sister plan to move back to Sandpoint someday, and plan to continue investing in the historic building when they do.

“We love it so much,” she said, “and we want to put our energies and efforts into making sure it’s there to stay.”