Leading ladies of the local past

When Bonner County Museum curator Heather Upton showed her “Tales From the Wardrobe” exhibit, the elaborate dresses and constricting whalebone corsets that the women of Bonner County wore around the turn of the century had more than one museum visitor raising their eyebrows.

“A lot of the individuals who saw the Edwardian and Victorian dresses were amazed that they were able to live in a rural area and be corseted in those dresses,” Upton said. 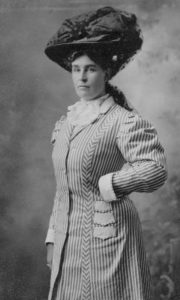 Nell K. Irion came to Sandpoint in 1906. She taught school and became the first female superintendent of schools in the county, the first woman to serve on the Sandpoint City Council and the first woman nominated for U.S. Congress from Idaho. Photo courtesy of the Bonner County History Museum.

It got her wondering: What were those women doing in those dresses? How were they making their way in North Idaho?

Those answers will be on display starting Saturday, Nov. 23, when the museum debuts its new exhibit, “The Women Who Shaped Bonner County.” The exhibit focuses on influential local women during the years 1880 to the late 1950s.

“There’s no one current,” Upton said. “That’s a whole other fabulous list.”

Upton’s research led her to separate key figures into a few vignettes based on what aspect of the community they most impacted: pioneering, arts and culture, education, business, and civic and political matters. She found that many women made waves in more than one category.

“These women were so powerful,” Upton said. “They were such amazing individuals that really shaped and forged their way, and had a vision for this place and did what they needed to do to make that come alive.”

One such woman was Nell K. Irion, who came to Sandpoint in 1906 and worked as a school teacher before becoming the first female superintendent of schools in the county, the first woman to serve on the Sandpoint City Council and the first woman nominated for U.S. Congress from Idaho.

Another was Ella M. Farmin, who taught school, practiced medicine, worked as a telegrapher for the railroad and served as the president of several local organizations.

Still another, much closer to contemporary times, was Hazel Hall, who worked with a handful of other women to hire an outside consultant to come to Sandpoint and help them develop arts in the community.

Still, Upton knows there were hundreds of women working over the years to make Bonner County the place it is today, and her exhibit is only highlighting a select few — a reality of doing history.

“There were so many women that were incredible and did great things, but they weren’t necessarily documented,” Upton said. “That’s the one thing that keeps me up at night, and still — as I’m exhibiting — I have not closed my research.”

Standing amid an array of half-completed displays as she prepared for the Saturday opening, Upton’s face lit up more and more with each significant woman she named. Though the project has been a taxing one, Upton said she’ll be sad when it’s over.

“I’m dreaming about these women every night,” she said. “They have become a part of me.”