A Highway Runs Through It:

Planning for growth in Sagle

The hamlet of Sagle, the unincorporated area just south of the Long Bridge, boasts a rural quality of life conveniently close to Sandpoint and its urban services.

But Sagle is at a crossroads of sorts. Growth pressures are sure to change the face of this loose-knit community that now features a few businesses, storage units and billboards along U.S. Highway 95, at least one suburban neighborhood, rural residential properties, farms, woodlands and recreational resorts. 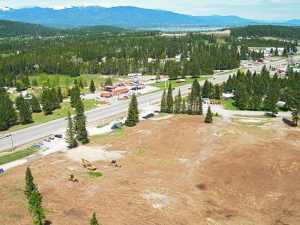 An aerial view of Sagle. Photo by Jerry Luther.

Among the looming changes that portend future growth pressures are:

•Gov. Butch Otter just signed a $320 million transportation bill that includes the continued expansion of U.S. Highway 95 improvements north. The next phase is the Granite Hill improvements, estimated to cost $22 million. Eventually, the divided, controlled access highway will extend into Sagle, but stopping short of the Long Bridge. This will make commuting from Sagle to Kootenai County jobs more attractive;

•The Sagle Valley Water and Sewer District is actively exploring options for establishing a sewer district along the commercial highway corridor, which would allow grocery stories, restaurants and just about any other type of development to occur.

Given these realities, and the state mandate that counties periodically update their comprehensive land use plans (most states require regular 10-year updates), the Bonner County Planning Department launched a process to update the land use plan focusing on the Sagle area.

In addition, because of the assumption that growth is likely all along the Highway 95 corridor, the county also launched a “sub area” plan for the Samuels-Selle Valley area. Eventually the county will replicate this process for other areas of the county to provide more localized attention based on the unique characteristics of those areas, according to Milton Ollerton, Bonner County’s planning director who was hired last year.

“The comprehensive plan is a broad brush,” Ollerton said. “This gives us a chance to microscope in and give more attention to these areas.”

Comprehensive plans provide counties and cities with a blueprint for growth, establishing general goals and objectives. The plan is implemented with zoning codes, which are the regulations for how development can occur.

Public workshops began earlier this year in Sagle and the Selle Valley to revise the comprehensive plan for those specific areas. Meetings have been well-attended and relatively peaceful in Sagle, but became unmanageable in the Selle Valley over concerns that the intent of the plan was to rezone the valley in a way that could lead to over-development, destroying the area’s rural character.

Ollerton’s assurances that the county had no agenda, other than to update the plan based on the community’s wishes, didn’t quell the worries. In response, the county is forming a special committee of Selle Valley landowners to guide the planning process. The Planning Commission will appoint committee members at its meeting tonight, April 20, beginning at 5:30 p.m.

Meanwhile, about 110 people have attended a series of workshops in the Sagle area, expressing their vision and desires for their community. One overarching theme—as in the Selle Valley—is to retain the rural character of the place.

At the same time, residents have suggested that it would be nice for Sagle to have its own grocery store and other commercial services that now require a trip across the Long Bridge. Getting a grocery store necessitates a sewer system, which is in the works and could spur additional growth.

Now the Sagle Valley Water and Sewer District has 265 water connections, and the capacity for 405. The district is making plans to provide the sewer infrastructure and treatment for the commercial corridor, but it could also serve higher density housing nearby, said Tim Blankenship, an engineer working on sewer options for the district.

“It’s really being driven by the commercial properties along Highway 95,” Blankenship said.

Sagle native Mike Gunter has been regularly attending the workshops and advocating for preserving the rural character of the area. He stays involved because, he said, “Government works for those who participate.”

At the April workshop, he said developers should locate denser subdivisions “closer to urban services, not in Farmer John’s cow pasture.”

That’s exactly the kind of direction that a comprehensive land use plan can give. But to think that the plan can stop growth is unrealistic, said Blankenship.

“They want to see it stay just the way it is,” Blankenship said, sharing his impressions from one of the workshops. “Well, that’s not going to happen. We need to make sure it develops in a way that’s going to be good for everyone in that area.”

The next workshop for the Sagle Sub Area Plan is scheduled for 6 p.m., May 16, at the Sagle Elementary School. For background materials on the planning effort, visit the county planning department’s website, bonnercounty.us/sagle-sub-

Susan Drumheller lives in Sagle and is on the steering committee for Project 7B, a citizens group with the mission to educate and involve the public in land use planning decisions.