If there ever was a show that succeeded in tackling the great intangible of the afterlife with equal parts comedy and pathos, The Good Place is it.

The underlying theme in this quirky series is that people can get better and they can also make each other better. But it takes a lot of broken eggs to finally make that omelet taste like something palatable. 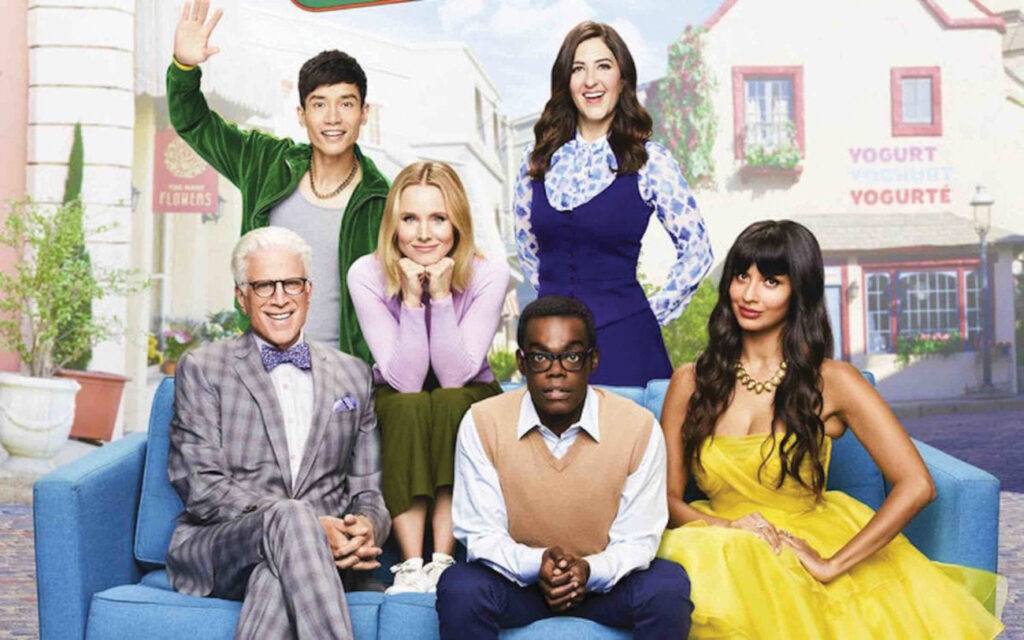 The cast of The Good Place makes this show a pleasure to watch. Courtesy photo.

The show, which recently aired its series finale, followed the story of four people who were not, let us say, good people in life. Kristin Bell’s character Eleanor Shellstrop was a selfish, spiteful scuzzbucket in life, not caring one iota for those she trampled in the name of bottomless shrimp cocktails and margaritas. William Jackson Harper’s Chidi was a kind but tortured moral philosopher whose anxiety and indecision frustrated everyone in his life. Jameela Jamil’s character Tahani was a Pakistani-English woman born into high society whose goal to be good is often overshadowed by constant name-dropping of celebrities and a rivalry over a more successful sibling who always left her playing second fiddle. Finally, Manny Jacinto played Jason, a dumb, misguided Floridian who relied on his amateur DJ skills instead of getting an actual job, which led to robbery, theft and scams to make quick money. He’s exactly the type of guy described in countless news stories that begin with, “A Florida man…”

In Season 1, these four hapless souls found themselves introduced to “The Good Place,” a sort of heaven where people are rewarded for accruing points in life for good deeds, and demerits for not-so-good deeds. Ted Danson brilliantly plays an angel named Michael who is known as the architect of “the construct,” but turns out to be so much more as the series goes on.

I won’t spoil the series for anyone who hasn’t watched it, but over the course of four seasons, we watch as each of the four characters sent to “The Good Place” fight for their souls by learning ethics, learning to be good to one another and, most importantly, teaching the powers that be that humans are not as black-and-white as we seem on paper.

Upon finishing the final season of The Good Place, I was grateful that this short series wrapped things up before it got monotonous. The sheer genius in writing the scenes and scenarios is astounding, as it fearlessly blended complicated moral philosophy with religious answers as to what the afterlife could be — all blanketed in comedy that could quite often be surprising. Just when it seemed the series was bogging down, a new episode would throw everything upside down and the following season was almost like watching a new show with the same characters.

The cast turned out to be one of the brighter points to this series, with a surprise discovery of D’Arcy Carden, who plays Janet, a good-humored entity that could answer any question, produce any object and who had evolved past omni-consciousness while also falling in love with the Red Bull swilling Florida man Jason. Also, appearances by Adam Scott, Maya Rudolph, Jason Mantzoukas and more make this series a winner in anyone’s book.

More importantly, The Good Place allowed viewers to speculate about their own version of what the afterlife could be, in a non-judgmental way that amazingly avoids offending any one religion. One of my favorite lines from Chidi is when he described to Eleanor what ancient Buddhists believed the afterlife to be: “Picture a wave in the ocean. You can see it, measure it, its height, the way the sunlight refracts when it passes through, and it’s there, and you can see it, you know what it is. It’s a wave. And then it crashes on the shore, and it’s gone. But the water is still there. The wave was just a different way for the water to be for a little while.”

The Good Place is available to stream on Netflix.