Death to wildlife or a shining example of beauty without destruction?

If you are pleased with the recent capture and banding of the Canada geese and plan to kill any that return to City Beach, then you agree with the systematic and organized killing of wildlife in North Idaho at City Beach. I understand. The geese droppings are an issue. I appreciate and recognize the time, effort and money already invested in addressing the issue. 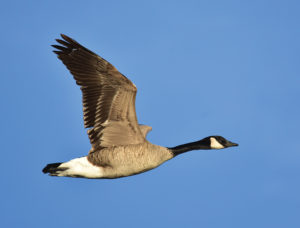 However, we live in a special place. Why is North Idaho so beautiful and special? The water, the trees, the mountains and the animals have defined this place long before we came. City Beach is beautiful; a focal point of our amazing community. We owe a debt of gratitude to the talented and visionary members of our community who developed it and now continue to improve and maintain it. Thank you to everyone who has played a role in making Sandpoint such a beautiful place to call home. It wouldn’t be the same without City Beach.

However, this beautiful place is not just our home. It was built in the heart of the natural habitat and breeding grounds of migratory Canada geese, as illustrated by the history of the Native Americans who occupied this land before us. The ongoing plan to capture, band and kill any migratory Canada geese who return to City Beach in the future is alarming, given where we live. The people who come to City Beach to enjoy nature and relish in its beauty may soon be inadvertently playing a role in the ongoing killing of some beautiful animals who are victims of human indifference. Do we want this to be the legacy of Sandpoint City Beach, an illusion of beauty, a place of death for migratory wildlife?

A permit was issued to relocate the birds. Another permit will have to be issued to get authority to kill them. Let’s not. Please. The city of Sandpoint in good faith worked in tandem with Wildlife Services with a depredation permit from the United States Fish and Wildlife Service to address this issue. The stated mission of USDA APHIS Wildlife Services is, “to provide federal leadership and expertise to resolve wildlife conflicts to allow people and wildlife to coexist.” The plan to kill the birds if they return is in direct contradiction to that stated mission.

These are not resident geese; they are clearly migratory and they will return. Unlike in southern Idaho, where resident geese establish a home year-round and relocation is up to 90% successful, we live near a massive body of water surrounded by forested areas near Canada and City Beach is blanketed with their favorite food: grass. They will return. Others will follow for decades and generations.

If we settle for geese relocation and the ongoing plan to kill returning geese, it will set a precedent for the killing of Canada geese at City Beach for decades to come.

As a Christian conservative, I concur with the words of an inspired man [former LDS President Joseph F. Smith], “We are a part of all life and should study carefully our relationship to it. … Men cannot worship the Creator and look with careless indifference upon his creations. … Love of nature is akin to the love of God; the two are inseparable.”

We have a temporary reprieve from the geese for this season due to their successful relocation to a wildlife management area near Coeur d’Alene; but, perhaps, we can avoid killing them when they migrate back to City Beach next year by exploring a few more options.

Have we tried systematic nesting deterrents to reduce the seasonal population and encourage early molting, so they resume flight and migrate sooner? With nesting deterrents, they may naturally choose other, more secure nesting sites in the future. Perhaps we can look to the examples of some parks in other states that use the Metalform Tow and Collect to collect the droppings into a bin. The droppings are then used as a dose of nitrogen in compost piles and to mix with mulch for a spring boost around other plants in city parks.

The legacy of Sandpoint City Beach can be a shining example of beauty without destruction. I believe in Sandpoint. I know we can collectively set the bar higher as we address the convergence of wildlife and humans in this beautiful place we call home. Let’s preserve our true North Idaho way of life by respecting nature and all the beauty around us — including the wildlife.