A brief history of farmers’ markets in Sandpoint

It goes back a lot longer than you’d think

It was a warm spring morning, the first Saturday in May, and I heard the marimba music several blocks away.

The joyful sounds drew me to Farmin Park where I found the grass and surrounding streets filled with vendors selling early veggies, cut flowers and loads of bedding plants. There were crowds of people there for the first day of the Farmers’ Market at Sandpoint, buying food, visiting with friends, and dancing to the music, all celebrating the start of our glorious North Idaho spring and summer. The first farmers’ market in Sandpoint opened in 1915 in a vacant store on the first floor of the St. James Hotel. The Pend d’Oreille winery now occupies that space. Photo by Nancy Foster Renk.

The market is going strong now, growing steadily from its small start in 1988 when just a handful of vendors gathered to sell garden produce. It was the brainchild of Lois Wythe, a master gardener who somehow knew that our area was ready for this type of venture. She printed flyers announcing a meeting and was surprised by the large crowd that showed up. Additional meetings followed to fine tune the plan, establish rules, and set the opening date for May 14, 1988, in Farmin Park. The location has remained the same but the market has expanded with booths filling the park and overflowing into and across Oak Street. It has become a vibrant part of the community, and I’m sure that Lois would be immensely pleased.

I’ve enjoyed the Farmers’ Market for 28 years now and always assumed it was a modern idea, a way to connect small-scale farmers with people who wanted tomatoes so fresh that they still held the warmth of the summer sun. I was surprised, while researching a different topic, to find references to another farmers’ market, and I knew that someday I would have to find out more.

It turns out that the first Farmers’ Market took place just over 100 years ago, on the Tuesday before Thanksgiving in 1915. Members of the Sandpoint Commercial Club had suggested the market idea as a way to encourage agriculture in the surrounding region.

Sandpoint was a lumber town then, but huge tracts of land had been clearcut and were being sold as “stump ranches.” Farmers were gradually improving this land and needed to find markets for their products. In turn, local merchants understood that any money earned by the farmers would be spent at stores in town so they supported the idea of this market.

The first farmers’ market opened in late 1915 in a vacant store on the first floor of the St. James Hotel. The Pend d’Oreille Winery now fills the same space with a tasting room and gift shop. 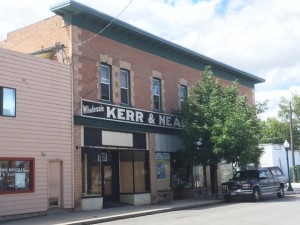 Another location of the farmers’ market in Sandpoint was the Krebs Building, which once housed Kerr & Nead Grocery as well as the Economy Grocery.

Since it was late November, the Commercial Club got permission to use a vacant store on the corner of Cedar and Third. The weather did not bode well. A foot of wet snow fell overnight and gray clouds on market day delivered a steady drizzle of rain. When the first customers came around 10 a.m., there were no farmers in sight. Things picked up soon, however, when C.E. Davis arrived with cabbages, carrots and nearly 160 pounds of dressed pork from his farm near Ponderay. Customers eagerly bought most of his pork within the next few hours. A second farmer failed to sell any of his live piglets, but the other two vendors did well with their celery and cabbage, sauerkraut, canned vegetables, crisp doughnuts, mincemeat, butter and dressed chickens and geese.

Despite the small showing, Mr. Davis was enthusiastic about the market, which he had been trying to establish for months. The local newspaper reported favorably that “this small beginning would seem to show that if the farmers will take hold of the idea the townspeople will get in and help by patronizing the market.”

The market location changed in December when Kerr & Nead Grocery offered to let the farmers use the vacant store adjacent to the grocery in the Krebs Building, on the corner of Pine and Second. Farmers continued to come once a week into December 1915, increasing to every day just before Christmas. Mr. Davis encouraged vendors to standardize their produce, making sure that everything was clean, sorted, graded and displayed attractively. He believed that the market experiment had been “a very successful beginning.”

The farmers’ market then apparently went dormant for nearly three years until the idea was revived, this time with both state and local backing. Charles Waggoner came to Sandpoint in early September 1918 to encourage local farmers to participate in a new market. He had been organizing similar ventures around North Idaho as part of his work with the state bureau of farm markets. While here, Waggoner met with members of the Sandpoint City Council to get their backing for a new farmers’ market. City officials were quick to back the proposition and agreed to lease the vacant lot between Cedar and Main Streets, just east of the Spokane International tracks, where La Quinta Inn stands today.

Less than two week later, the Sandpoint farmers’ market opened on a Saturday morning with great success. Mrs. Emma Weaver had 25 varieties of fruits and vegetables for sale, garnering her first prize – a $3.50 pair of shoes from J.A. Foster & Co. Joe Sitko won the second prize for his fourteen different kinds of fresh produce. The market, which was open every Wednesday and Saturday morning, continued to draw both buyers and sellers. Farmers sold seventeen loads of produce one morning in October, despite the cold and rainy weather. The public market stalls were located on Cedar where LaQuinta Inn stands today.

The market gained stability through active participation and encouragement from city officials, the Bonner County Farm Bureau and the state. The city council passed special ordinances to regulate the market and began looking into securing a permanent location. Edgar Ludwick, the county farm agent, pushed for regulations, not only to ensure a clean market area but also to limit the number of sellers so that the supply of perishable produce did not exceed the demand.

Cold weather drove the market indoors by January 1919. Growers once again were back in a vacant store in the Krebs building on the corner of Second and Pine, next to the Economy Grocery. This was only a temporary solution, however, because others were working to build a row of booths on the vacant city lot where this market began. The 24×62 foot structure, located on Cedar Street just west of today’s Tam O’Shanter (better known as the Tervan), had eight stalls. The two that were designated for selling meat had a concrete floor and were screened. Farmers wanting to sell at the market paid rent on market days to offset the construction costs incurred by the city.

The public market stalls were located on Cedar where LaQuinta Inn stands today.

This new market place opened by early September 1919 with all of the sellers decked out in white aprons. Prices were standardized, with maximum charges established by a committee from the Bonner County Farm Bureau. Other regulations stipulated that any food products that needed to be wrapped had to use clean wrapping paper, all part of an effort to maintain sanitation levels.

I do not know just how long this farmers’ market lasted. It continued at least into 1921 since the building is clearly labeled “Public Market” on the 1921 Sanborn fire map. The building was still there in 1948 but used for plumbing and tire sales.

La Quinta Inn rises tall above the former market site, just a block away from Farmin Park which fills every Wednesday afternoon and Saturday morning with garden produce, crafts, music and a friendly crowd of people from May to October. I’ll see you there soon!

Historian Nancy Foster Renk is the author of “Driving Past: Tours of Historical Sites in Bonner County, Idaho” and “A Glorious Field for Sawmills: Humbird Lumber Company, 1900-1948.” When not busy gardening, she periodically writes articles on local history for her blog, northidahopastpresent.com.