Editor’s note: This is the third article in a three-part series highlighting the Bonner County Human Rights Task Force’s efforts in the community.

Where does the Bonner County Human Rights Task Force (BCHRTF) go from here? With all the possible projects we can take on, how do we choose? One way we do this is to listen to our community. As mentioned in the previous article, BCHRTF surveyed the community last year.The results of this survey gave the Task Force their direction and focus for the coming year. You can access our website for complete survey results. The top area of concern for our community is to ensure that all of Idaho’s citizens are protected under the law against discrimination. Sandpoint was the first city in Idaho to add protected status for the LGBTQ community. Other cities have since followed suit. BCHRTF will continue its efforts to make this a reality on the state level through educating the public and supporting the addition of the words “sexual orientation and gender identification” as protected classes under the Idaho Human Rights Act. It is our goal that the legislature will choose to finally be courageous enough to get the amendment out of committee, where it has been stuck for nine years, for a vote to end discrimination of Idaho citizens. 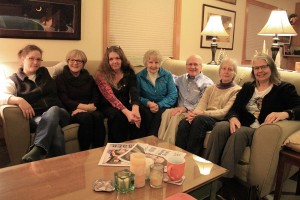 The second highest priority of community members was in the area of mental health. While there is disagreement in the community surrounding Jeanetta Riley’s death and human rights issues, there is agreement that it was a tragedy for our community. Ms. Riley’s death pinpointed the fact that Bonner County is severely lacking adequate mental health support for individuals and families in need. As a task force, we are collaborating with NAMI Far North to increase awareness of the need for better services and have given financial support to help fund the beginning stages of a crisis line. This 24/7 line will be accessible to all community members who need support and mental health services in times of crisis. Additional support for this project can be directed to NAMI Far North.

Our community was recently assaulted with three very disturbing robo-calls that were racist, homophobic and offensive. BCHRTF contacted the US Attorney in Idaho, Ms. Wendy Olson, for legal counsel. While the calls do not meet the criteria to be a hate crime, they may have questionable aspects of filing false documents and are being investigated by law enforcement. Similarly, in August a round of robo-calls attacking Muslim immigrants relocating to Idaho have been traced to a group of former white supremacists. Community members who receive such calls are encouraged to contact local law enforcement to file a complaint. The Task Force continues to work for an inclusive Idaho, which does not discriminate against refugees fleeing war torn lands regardless of their country of origin or religion.

The Confederate flag brings home the issue that some discrimination is covert. There are some who say flying the confederate flag is a right of citizens to free speech. While this may be true, do not ignore the meaning that the confederate flag carries with it. In 1861, Confederacy Vice President Alexander H. Stephens’ gave his “Cornerstone Speech,” in which he clearly stated his racist views and the responsibilities of a new government, … “its foundations are laid, its corner-stone rests, upon the great truth that the negro is not equal to the white man; that slavery, subordination to the superior race, is his natural and normal condition.” In the late 1930s and ‘40s, the Klan utilized the flag as a symbol of white supremacy, a practice that it continues to this day. With the advent of Brown v. Board of Education in 1954, those who once again picked up the Confederate flag were opposed to integration and equal rights for all. The civil rights movement was further testimony to this tumultuous time, which saw an increased use of the Confederate flag. So there is a long history and precedents have clearly been set for the Confederate flag to represent white supremacy, racism and bigotry. We urge community members to be aware of the symbols they choose to use and understand the ramifications of using a symbol of hate and bigotry in the guise of individual rights.

BCHRTF’s responsibility is to affirm the American principles and ideals of the inviolable dignity and worth of each human being. The mission of the BCHRTF is to promote and secure mutual understanding and respect among all people. BCHRTF recognizes that it is the racial, social, and cultural diversity of our people that makes Bonner County a rich and worthwhile place to live.

We believe in our community and in the rights of all people to enjoy life free from hate, bigotry and discrimination. We encourage Bonner county citizens to stand strong with us in promoting Idaho and Bonner County as a place where all are welcome.