In the wake of the recent fliers distributed around Sandpoint, I asked comedian Nathan Brannon about what he thought about the contents which stated: “Negroids are not fully human.”

“You could look that up on your phone and see that it wasn’t true,” he said with a laugh. “I have heard it all. I have been black my entire life.” 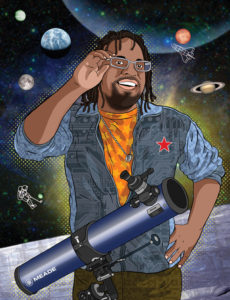 Brannon started a podcast called The Hamster Village in which he interviews and features interracial marriages from around the country. It has been downloaded from 25 countries and was the cause of a father-in-law and son-in-law meeting peacefully for the first time. Hamsters are a great example of coexistance, he explains, with their variety of colors and their ability to live peacefully in an enclosure. Of his own “Hamster Village” he says he has been “incredibly lucky” and that he and his white wife were accepted with “open arms.”

One of his greatest sources of inspiration is fatherhood. Brannon’s son is two years old and a constant source of humility as any kid can be. At the Spokane Comedy Club last spring, Brannon made me laugh over situations I had previously cried over. Parenting young babies and getting judged for every decision is rough, and Brannon says there is a sort of “grace period” of when the situation happens and when it ferments into comedy.

“Comedy lets you be honest, and it lets the crowd be honest with you,” he said. “Everything is easier to face in comedy. A lot of standup comedy is actually truth, but in a joke it lets you explore without stress.”

Brannon says he began to do open mics around Portland, Ore. (where he went to school), helping build the comedy scene. Around 2006, he had an epiphany about the direction of his comedy when he was lighting up a stage.

“Every standup told homeless jokes, and I told mine and everyone laughed, but one night I really noticed all of the homeless people outside near the greyhound station,” he said. “I realized that I threw them under the bus… that they couldn’t even afford to go in the club where I made my living.”

Brannon learned that you only have a limited time on the stage: “I realized the power of the platform. You have a voice to break down people or inspire people… The voice to bring light to something that hasn’t been talked about.”

Brannon says that there are layers beneath the initial laughter that a great comedian is able to weave in, leaving an audience feeling introspective. Brannon is fresh, honest and has the gift of storytelling where you get to almost walk in his shoes.

“I hope people walk away with a broader sense of what comedy is,” he said of his stand-up, which is available to listen to online.

Interestingly, he says he was an introvert until he blossomed in college when he began to develop his skills as a comedian. In 2014 he won Seattle’s International Comedy competition, and prior to that he was awarded “Portland’s Funniest Person.”

I told him that our town was upset and ashamed about the fliers and that the mayor, 88.5 KRFY, the Human Rights Task Force and so many other groups have vocalized their support for diversity, unity and kindness in our town.

“Thank you… it is important to vocalize that this isn’t welcome in your town,” he said. “The arguments in the fliers are so childish they hardly concern me. You already know that you are bigger than that flier. They were done out of emotion… hatred, anger. They hope that their reader will become emotional. Squash it out and take the high road by taking care of those around you and in your town. I have a lot of family in Idaho and Montana, and I have run into that attitude a lot. If there were a white-supremecist-flier guy at my show, I wouldn’t change myself. I would just make him laugh.”

You can catch Nathan Brannon’s act at the 219 Lounge on Saturday, Sept. 23 at 8 p.m. Tickets are available in advance for $10 or at the door (if any are left) for $12. Brannon will be performing with comedians Morgan Preston and Fred Bowski.