Wounded in Vietnam, fifty years ago

John “Doc” Ivy served five tours in Vietnam from 1966-1971. He was introduced in the Reader on May 23, 2017, as my beloved veteran neighbor. Today, at age 72, Doc is just “hanging in there” (his body has been ravaged from the effects of Agent Orange) and he has adamantly expressed that he doesn’t want another surgery. In this interview (recorded over Veterans’ Day weekend 2019) I asked Doc to take us specifically to that day in Vietnam, 50 years ago, when he nearly died. Here’s his story, in his own words. 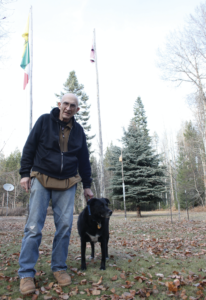 John “Doc” Ivy and Riley stand beneath “Don’t Tread on Me” and Purple Heart flags, at their home in northern Sandpoint. Photo taken on Veterans Day Weekend, 2019 by Jodi Rawson.

It was a hellhole — rats like you wouldn’t believe. There were rats the size of small cats. One night I felt something pricking on my finger and a rat hopped off my bunk. I went down to the medic and said, “I got gnawed on by a rat, what are the chances of rabies?” and they answered, “In 21 days we will know if you got it.” I figured, “What the hell?” — I mean, we were getting hit two or three times a night with harassing mortar fire and whatnot.

In late summer of 1969, on a run back from Da Nang, I was riding shotgun in the front of the deuce-and-a-half [truck] and we had six guys in the back. We were probably a couple of miles from our camp, Firebase Bastogne, and I look out the window to the right and I see this puff of smoke. By the time I went to say, “Holy shhh…” an RPG [rocket-propelled grenade] hit right behind the cab of the truck. It threw shrapnel through the back of the cab and peppered my right leg.

The round, when it hit, it hit the top of the gas tank but, fortunately, we had diesel in it so it didn’t explode — the RPG just opened it up like a can opener across the top. When it exploded, not only did it throw shrapnel up into the cab where I was, it threw shrapnel into the bed of the truck but there was a spare tire in there and the bell of the tire was such that the shrapnel actually got thrown back down by the spare tire. Nobody in the back was hurt.

When we got hit I felt my leg jerk. I didn’t feel anything but my leg jerk and I thought it was just a concussion thing. And then, of course, the RPG had blew out the fuel pump — just took that right out — and I tell the driver, “You just keep this thing going as far as we can go and pull over to the side of the road.”

We were receiving automatic weapons fire from both sides. The curious thing was that we had the canvas on the deuce-and-a-half, and not a single bullet hit the truck. These were NVA [North Vietnamese Army] regulars, no question about it, so how they missed our truck at roughly 50 yards beats the hell out of me. From what I could tell, there was about 10 to 20 of them, but they didn’t rush us. I was concerned about that because the people I was with were all new and had never been in combat before.

When I went to get out I noticed that my right pant leg was soaked in blood. I took my belt off, put it above the wounds and made a tourniquet. I tightened it down and then I stood in the middle of the damn road, like an idiot, with my Thompson submachine gun in my right hand, cursing them out and yelling, “Come on get me, you sons of bitches!”

After about 45 minutes a small convoy came along, headed towards Bastogne, and I said, “Do you mind if we hitch a ride, we just got hit?”

When I got back to the camp I reported into my C.O. [commanding officer] and I said, “Sir, we got caught in an NVA ambush. Everyone is OK except for me. I took shrapnel.” I was a squad section leader, and my platoon sergeant freaked. I mean he absolutely lost it.

They called in a medivac chopper for me and they flew me into the 90-30 vac in Da Nang. The curious thing about the setup of the helipad in Da Nang is that it is set up right between 90-30 vac hospital and Grey’s Registration [where the bodies were sent], so you could go either way off the chopper. Anyway, I get off the chopper and they didn’t even radio in that they were bringing wounded in, so when I got to the helipad there wasn’t any gurney to take me in.

So here I am, and I still got this tourniquet on my leg with my belt, I am holding my pants up, and I am dragging my right leg and leaving a trail of blood from the helipad into the hospital. The nurse took me right into surgery, gave me some kind of cocktail and I don’t remember nothing for the next two days.

When I woke up in the hospital I found out my calf was really shredded and they had to wire it back together. Of course the surgeon came by and pinned a Purple Heart on my pillow.

They kept me there for two weeks and they were going to send me to Japan. I said, “No, you just send me back to my unit.” It was driving me crazy laying around the damn hospital!

I reported back to my unit and they said, “You really shouldn’t be here; you need to be recuperating.” I said, “My people are here. This is where I need to be.” I knew people at the Pentagon if I needed to get my orders changed. I did that a couple of times.

These were guys that trusted me to take care of them, and in the end that was what it was all about — like family. If nothing else I can say that while I was there I never lost a man. I never had a man wounded — except for me.