The soirée begins innocently enough at the Spatsky Manor on a Saturday night. Everybody is there, dressed to the nines and drinking hooch at this opulent estate in the heart of the Depression.

Ben Carrie-Deway is the owner of Spatsky, and the stockbroker is doing pretty well all things considered — a little too well, some might say. That is until the party really gets going and (plot twist!) Ben turns up dead in his study. 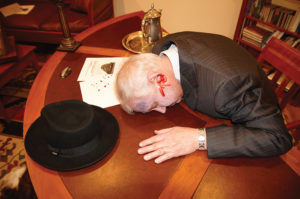 Dennis Pence gets into the spirit for Sandpoint Rotary’s “A Dinner to Die For.” Photo by David Keyes.

Maybe you — audience member and detective — can sift through the clues, interview the interesting and colorful suspects and hear their alibis, drink period-themed drinks, have fun and even support two deserving local causes this Saturday at the Sandpoint Business and Event Center.

The murder mystery dinner theater production of A Dinner To Die For begins and ends its one-night stand this Saturday, May 4, at the Sandpoint Business and Event Center, 102 Euclid Ave. Doors open at 5 p.m., show starts at 6. A few tickets still remain and can be purchased online at dinnertodiefor.org. $100 includes dinner from Tango Restaurant and an opportunity to be named Top Dick.

Sandpoint Rotary has hosted a gala the past two years with funds going to fund the teen room at the East Bonner County Library. This year the civic organization decided to change things up a bit with a new beneficiary as well as a new format.

“We wanted to add some entertainment into the evening and to get away from the standard dinner and auction format, which worked but was predicable,” said Ken Wood, Rotary member, event coordinator and director and one of two dicks in the cast.

With the addition of the murder mystery, there will still be a live and silent auction weaved into the plot, dessert auction, live music, a wine wall and more.

Food for Our Children is a nonprofit with the goal of eliminating childhood hunger in Bonner County and is the main recipient. Mac Hollan, Food for Our Children board member, recently told Rotary members the organization gave out more than 18,000 “backpacks,” which are weekend food bags for children in the community.

“These are kids who are going home with food who otherwise might not have had that,” Hollan said. That got the attention of the Rotarians who purchased tickets and are leaning on friends and acquaintances to do the same.

“We have really focused on children as part of our mission,” said Sandpoint Rotary President Ryan Luttmann. “Food for our Children makes a huge difference for many local families, and we really like the fact that it is local and every dollar given to it goes back into food for children — no overhead, no staff.”

What about the performance?

The audience is encouraged to don 1930s garb, and the performers will not disappoint. Think Great Gatsby — without the star quality of the guy who died in Titanic but not much below that.

This really will be A Dinner to Die For because once the host is snuffed out — played by guest stiff Dennis Pence — the accusations and the fake accents start flying. Audience participation is encouraged!

Yes, THAT Dennis Pence is dead. More dead than my $16 Coldwater Creek stocks dead. He’s a good sport, even joking last week that word of his demise might spur ticket sales. Pence is the founder of Food For Our Children and former CEO of Coldwater Creek.

“I hear that killing me off is helping ticket sales?” Pence asked while being covered in makeup and werewolf blood for the photo that accompanies this story.

The cast of the show includes Pence, who will play murder victim Ben Carey-Deway. His “wife,” Ginger Bodgers, will be played by Suzen Fiskin, Dr. Gerry Atrics by David Keyes, Nurse Penny Cillin by Dyno Wahl, Minuet Johnson the maid by Cami Murray, Al Cappuccino the business associate by Ivan Rimar, Phil Anderer the politician by Steve Verby, Damien Wurst the artist by Bala Bishop, and Arthur Pollock and Ken Wood as the Head Dick and Junior Dick respectively.

Tango Cafe will provide appetizers of smoked oyster crostini and crispy pork belly. Dinner will consist of Waldorf salad, ham and gruyere stuffed chicken with spiced apricot rum glaze, scalloped potatoes and asparagus. Themed drinks from the 219 Lounge will be available as well.