Upon the release of its fourth studio album, the band Flying Mammals continues to blaze a trail unlike anything any other band can boast.

For one, it’s a siblings-only project. Aaron, Jeremy, James and Andrew Birdsall, who grew up in Sandpoint but have since moved away, make up the four-piece band. 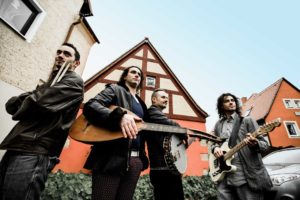 And the number four is integral to the band right now, seeing as there are four of them and this is their fourth album. Hence the album title “Vier” — “four,” in German.

But why in German?

It’s a long story, but a good one, and it begins with Aaron’s vision for a family band. Originally a trio, Jeremy only joined Flying Mammals prior to “Vier.”

Flash forward to Grammy-winning producer Sylvia Massy and her manager questioning the existence of flying mammals, and a fateful Google search that led her to the Birdsall’s band. The producer, best known for her work with Tool, Johnny Cash and many others, liked what she heard, and offered to work with them.

Aaron, James and Andrew live in Coeur d’Alene. Jeremy lives in Orlando, Fla. Once they’d decided to work with Massy, the question was where. The options seemed to be Idaho, Oregon (Massy’s home turf) or Germany, Aaron said. Sylvia was teaching a seminar at a studio in Germany and recording another band there, so it seemed only natural to make album four a real adventure.

Jeremy said he realized the chance to go to Germany was already great, but that combined with the chance to work with Massy made it “a once-in-a-lifetime thing,” he said.

“That was kind of a decision maker for me, too, when I knew Sylvia was going to be involved. That’s going to make this an important piece of art,” Jeremy said. “Everything she does is awesome.”

“Vier,” released in September 2017, is a full-concept album. Each of the 13 tracks flows to the next — quite literally, according to Aaron.

“It’s definitely a different experience,” he said. “We wrote it all as one piece, a 37-minute piece.”

Jeremy said working with his brothers on “Vier” helped him delve into some genres he loves but typically doesn’t get to play.

“The album opens with a country folk song and goes right into a pop rock thing, and then after that it goes into a more piano-driven epic pop kind of sound,” Jeremy said, going on to describe more of the variety that is Flying Mammals, even mentioning electronica and heavier industrial sounds. “It doesn’t seem like it should make sense, but somehow it does.”

It also wouldn’t make much sense to use an old cassette deck, a robot or a cheese sausage as filters while recording music, but such was the experience working with Massy, Aaron said.

“She works quickly and she works thoroughly, but she always has fun,” Jeremy said of Massy. “She does such a good job getting good performances out of people. I think the songs were great, but without Sylvia I don’t think the album would have been as good as it was.”

As far as what’s next for Flying Mammals, Aaron said they’ll consider a European tour.

“I think the European markets are a little more open to indie artists, and to them we are a foreign novelty instead of one of the million indie bands in the U.S. trying to make it on their own turf,” he said.

He and Jeremy are also already working on songs for a possible fifth album.

“I’m excited to keep working with my brothers. I think we make better music with the four of us than we do separately,” Jeremy said. “‘Vier’ is the best thing I’ve ever been a part of.”

Find Flying Mammals wherever you buy or stream music.