‘We (still) live in a yellow submarine…”

The Beatles’ classic sing-along film gets a new look 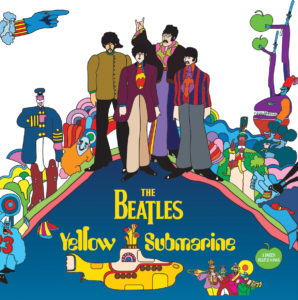 The poster for the Beatles’ “Yellow Submarine” remastered. Courtesy photo.

“Yellow Submarine” is an animated film based on the title song written by John Lennon and Paul McCartney and sung by Ringo Starr. It was directed by George Dunning. Featuring hand-drawn animation, the film styled itself as a sing-along for kids, fans and anyone with a hankering for a good time.

The film’s score was nominated for a Grammy award in 1970, but lost out to Burt Bacharach’s music for “Butch Cassidy and the Sundance Kid.”

Early this year, to celebrate the 50th anniversary of the film, the Beatles’ Apple Corps, Ltd. announced they would be bringing back “Yellow Submarine” for a cinema run, featuring a remastered look.

Due to the delicate nature of the hand-drawn original artwork, no automated software was used in the digital clean-up of the film’s restored photochemical elements. The remastering was all done by hand, frame by frame. Translation: It took a really freakin’ long time.

“We’re thrilled to have the privilege of bringing ‘Yellow Submarine’ back to the big screen so that three generations of happy Beatles fans can enjoy the ground-breaking animation and classic tunes that have long been part of our collective cultural DNA,” said Abramorama CEO Richard Abramowitz.

Upon its release, movie critic Roger Ebert called the film “the most original and inventive feature-length animated cartoon since the days when Walt Disney was still thinking up innovations.”

It was Disney, in fact, that first explored plans in 2009 to bring a 3D remake of the film to be directed by Robert Zemeckis, but the project was killed in 2011.

Catch the remastered version of “Yellow Submarine” and sing along with one of the most influential bands in the world at the Panida Theater. Check out www.Panida.org for more information.