Few would argue that the political world isn’t dirty. And it never feels dirtier than when it focuses on doing the dirty.

Sure enough, the Idaho politician has a small (and clothed) role in a low-budget action movie filled with gun fights, bar brawls and, yes, a handful of awkward softcore sex scenes. The movie is wonderfully titled “A Time to Revenge,” and I watched it … for, uh, journalism. 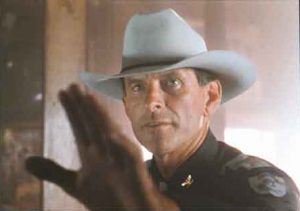 Otter staffers Jon Hanian and Mark Warbis offered the Idaho Press-Tribune a more plausible explanation. In 1993, Otter, then the lieutenant governor, helped the producers of a low-budget action-Western called “Roundup” secure horses for their shoot. The director took a shine to Otter’s “authentic Idaho-cowboy looks” and cast him in the role of a corrupt sheriff. As nothing seemed untoward about the script, Otter agreed to this rare shot at the silver screen. Hindsight shows the naivety in expecting anything of silver quality—or bronze, or pig iron, for that matter—from “Roundup.”

The Idaho Falls Press-Tribune reports that after “Roudup’s” principal photography finished, the production studio declared bankruptcy and sold the movie rights. What emerged on the other side of production hell was “A Time to Revenge,” a derivative action-thriller with 10 minutes of gratuitous sex grafted into it.

So how does Otter fare? He’s  … well, he’s OK. He says a couple lines. He sticks his thumbs in his belt. He reflects light, ensuring that he and his cowboy hat are visible in all his scenes. Put it this way: No rational person would count him among the movie’s biggest problems.

I watched “A Time to Revenge” in the format best suited to its dignity: a low-resolution YouTube upload with out-of-sync audio. Trust me, there’s no amount of visual clarity that could save this movie, seemingly pulled wholesale from the darkest corner of a film editor’s nightmare. Some scenes feature characters who speak but are never seen on screen, while in others, belts and props appear and disappear in a game of continuity error whack-a-mole. If you think that’s bad, wait until you see the action sequences; the only way they make sense is if the laws of time and space decided to take the day off.

The movie takes place in a fever dream of Idaho where the chief export is rodeo and the favorite pastimes are line dancing and bar fighting. In this imagining of the Gem State, the days are filled with ranching, the nights are filled with drinking and the breasts are filled with silicone. Not to put too fine a point on that last item, but rural agricultural communities apparently create an astounding demand for cosmetic surgery.

Much of the movie’s first half-hour is devoted to Whittmar, a land baron trying to push ranchers like the hardworking Conrad off their property. Eventually, Whittmar orders his henchmen to kill off Conrad by making “it look like an accident,” which they read as “beat him up and drag him behind a truck.” Whittmar’s henchmen, it must be said, make stormtroopers look well-trained and capable by comparison.

If anyone can match Whittmar’s goons for incompetence, it is Will, the main character and Conrad’s son. Will’s style of heroism is being pulled away for trysts in public restrooms or trucks while his friends do the fighting for him. He has almost no narrative agency and simply meanders through the movie, vaguely confused by his circumstances. That includes his sex scenes—I’m honestly not sure he’s capable of giving legal consent.

Speaking of those sex scenes, they’re only notable for their soul-crushing dullness. They go on … and on … and on, with no sensible purpose, until you scream Monty Python-style at the TV, “Get on with it!” Worse still, they’re cut into other scenes without rhythm or tonal coherence. The worst of the bunch is spliced between an action setpiece and a dance number, cutting so incomprehensibly you’re not sure whether you’re watching “Rambo” or “Footloose” or “Debbie Does Dallas.”

It’s fairly obvious that “A Time to Revenge” aimed to be a low-budget rip-off of 1989’s “Road House,” itself a benchmark for so-bad-it’s-good movies. Let’s be clear: “A Time to Revenge” is no “Road House.” It’s barely the basis for a “Mystery Science Theater 3000” episode. For all its Idaho novelty, it’s a truly disastrous movie, and I urge you to stay far away from it.