Voting in the age of coronavirus

It didn’t take long for Bonner County elections officials to realize that the coronavirus pandemic would require major changes to how they managed the polls for the May 19 primary election, which covers federal, state legislative and county seats.

“It was apparent that we would have problems with our polling places,” said Bonner County Clerk Mike Rosedale, noting that most local poll workers are in their 70s, thus putting them among the high-risk populations for complications related to COVID-19. “We didn’t want to expose our people to that.”

What’s more, the social, communal nature of polling places would have posed an undue risk for viral transmission. Looking at populous Canyon County, next door to Boise in southern Idaho, Rosedale said social distancing guidelines would have limited an elections operation that normally employs 500 poll workers to only 25 — “It would have been a total failed election,” he said.

Recognizing elections are “between a rock and a hard place,” Rosedale is emphasizing how, when and where area residents can both request and cast their ballots on Tuesday, May 19. 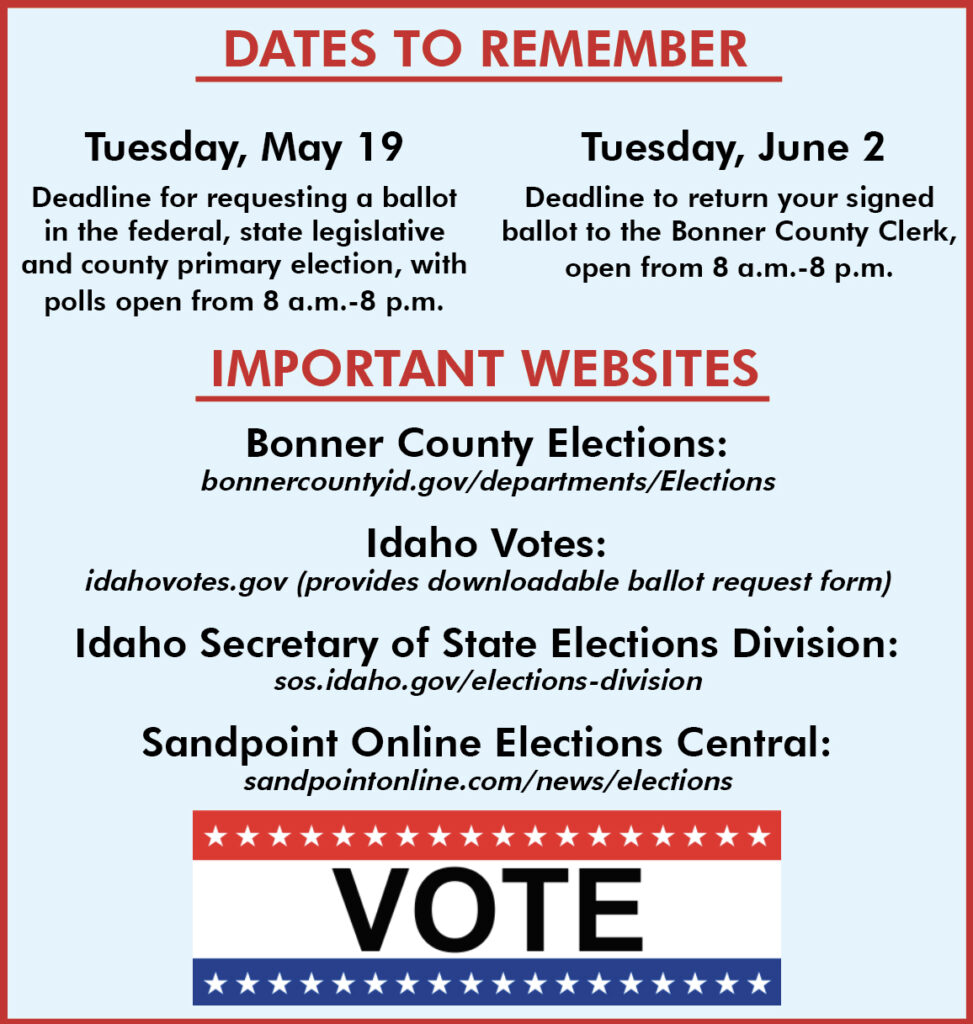 First of all, ballots are being sent by mail only — but, unlike absentee voting, voters must ask for their ballot, which will then be mailed to them.

“That’s the biggest thing: You must request your absentee ballot,” Rosedale said. “You have to affirmatively request an absentee ballot and which one you want.”

Because of the Idaho Republican Party’s closed primary, only registered members of the GOP can vote on the party’s primary ballot. The Democratic Party opens its ballot to both declared members and unaffiliated voters.

Requests for the appropriate ballot must be made by 8 p.m. on Tuesday, May 19. Pre-registration has been suspended for the May 19 primary, which means voters can register any time up to and including Election Day. To request a ballot online, go to idahovotes.gov/vote-early-idaho. Follow the directions, but be aware that the online system is operating under strain from the numbers of Idahoans trying to fill out or download the ballot request form and so has experienced some errors.

Rosedale said the county clerk’s office will accept the ballot request form in a number of ways: by mail to 1500 U.S. Highway 2, Suite 124, in Sandpoint; email to [email protected]; or by phone to 208-255-3631. Voters may also simply take a picture of the form with their smartphone and email it, he said.

Rosedale added that a table outside the office with the necessary forms and staff will be available until 8 p.m. on Election Day.

Once filled out, the ballots must be signed on the back of the envelope and returned either by mail to the Bonner County clerk or delivered in the office’s drop box by 8 p.m. on Tuesday, June 2. The signature on the back is crucial — if it’s not on the envelope or differs widely from the voter’s normal signature, county officials will call to confirm whether that voter actually submitted a ballot.

If the ballot is missing a signature because the voter simply forgot, they will be required to sign it in person at the county administration building or it will not be counted.

The deadline for declaring party affiliation has come and gone, as has the deadline for filing as a partisan write-in candidate for federal, state legislative or county office. According to Rosedale’s office, only a handful of write-in candidates will be accepted on the ballot — Cindy Marx, running as a Democrat against incumbent Bonner County Sheriff Daryl Wheeler, as well as Daniel Lawrence, Michael Stout, Richard Harter and Sarah Matlock, running for Republican precinct committee positions in Laclede, Priest River, Clark Fork and Oldtown, respectively.

Any other write-in names will be discarded as ineligible because they did not file by the April 21 deadline.

“If you didn’t file for a write-in, you’re out of luck,” Rosedale said. “The write-in slot is reserved for eligible write-in candidates.”

Rosedale said he’s confident that Idaho’s absentee voting procedures will ensure the upcoming election is fair and free of fraud, and Bonner County is better positioned for vote-by-mail than some other municipalities in the state.

“We build our own ballots and nobody touches our machines,” he said. “Nobody can infect it with some funky switcheroo.”

Rosedale expects a good turnout for the primary — in part because “our country is more polarized than it was four years ago, unfortunately, and I imagine that intensity is going to increase” — but the vote-by-mail system will be able not only to handle the volume of ballots but continue to be useful should COVID-19 linger into another election cycle.

“It’s a whole lot more work for my office, but we’re able to manage it. I think it’s going to go really well,” he said. “If we have to do it again it’ll work again.”

However, he added, “My biggest concern is that somebody will go to their regular polling place and it will be closed and they won’t vote.” That’s why Rosedale advises county residents to pay particular attention to the idahovotes.gov website, the county’s elections site at bonnercountyid.gov/departments/Elections or simply call 208-255-3631 with questions.