First, it was two of Idaho’s smallest counties: Butte and Camas. Next, Idaho secretary of state officials visited Bonner County to perform a partial recount of the Nov. 3, 2020 presidential election, all in the name of disputing widespread claims of election fraud — dubbed “The Big Lie” — by My Pillow CEO and conservative activist Mike Lindell.

A document detailing how all of Idaho’s counties were “hacked” and votes “flipped” from Donald Trump to President Joe Biden prompted the recounts. According to Chief Deputy Secretary of State Chad Houck in an Oct. 6 media release, Lindell’s figures “questioned the integrity of the Secretary’s office, and the integrity of the 44 elected county clerks across Idaho, and that is something we won’t take lying down.”

While Butte and Camas were selected for complete recounts due to their small size and complete inability to be hacked due to using only paper pollbooks, Bonner County — clocking in at the state’s eighth most populous — volunteered to join the effort. 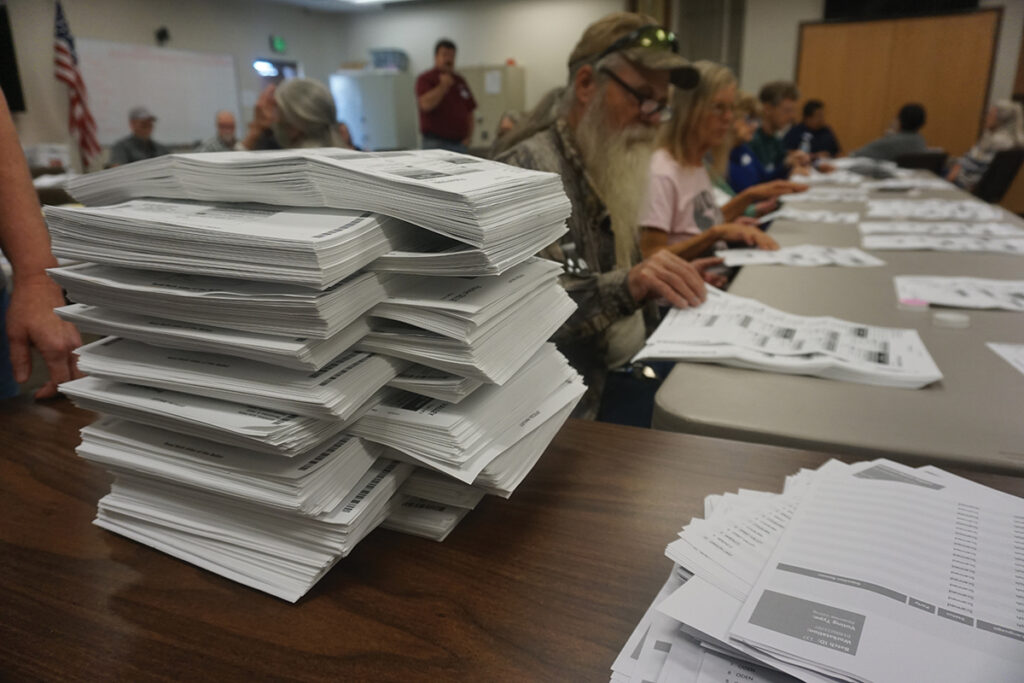 Clerk Mike Rosedale first volunteered Bonner County for a recount after the May 2020 primaries — when worries spread about ensuring election integrity while using only absentee ballots — and again following Lindell’s claims, alleging 2,244 votes were electronically switched from Trump to Biden in Bonner County during the November presidential election. This time, the state took Rosedale up on his offer, and a handful of personnel from the secretary of state’s office facilitated a recount on Saturday, Oct. 2, commencing the process at 8 a.m. and shutting the lights off shortly after 6 p.m.

The partial recount consisted of randomly selecting eight of the county’s 32 precincts (totaling about 7,700 ballots), hand-tallying each presidential vote and then comparing those tallies to canvassed results from November 2020. While 45% percent of votes were placed at precincts on Election Day and therefore already sorted, the remainder were absentee ballots or early votes — all of which needed sorting on the day of the recount.

As Bonner County Elections staff, SOS officials and both Republican and Democratic volunteers filled the room with the sounds of shuffling ballots and the piecemeal chatter of ballot sorting — “Trump,” “Biden,” “Oldtown,” “Clark Fork” — Rosedale kept a watchful eye on operations from the front of the room. At two long tables, volunteers worked through the early and absentee votes, careful not to let any ballots from the chosen precincts slip through.

“This is my biggest worry, right here. The tables doing this,” Rosedale said, gesturing toward the individuals sorting ballots. “That’s what kept me up last night.”

At other tables, volunteers from both political parties were paired up and given tally sheets. An SOS employee would hold up a ballot and state the voted-for candidate and the volunteers would mark their tallies.

Officials were prepared to account for human error, which would fall under a 1% or less discrepancy from the canvassed totals, according to Houck, who oversaw recounts in all three counties.

“Just the fact that we’ve got 30 bodies in the room that are all human, chances are we are going to create human error, even in our count today,” Houck told the Reader while on site in Sandpoint, “which is why this is not a recount for the purpose of recertifying any kind of totals or changing any numbers. It’s really looking … to see, and either prove or disprove, that 2,244 ballots were not electronically manipulated.”

In Camas County, the recount revealed a 0.14% margin of difference between results found in November 2020 and those tallied during the recount on Sept. 23. In Butte County, after a math error was corrected in the days following the recount, SOS officials reported a 0.07% discrepancy between Election Day findings and recount totals.

In Bonner County, officials found a 0.116% margin of error. Nine ballots — eight for Trump and one for Biden — seemingly went uncounted in November, seven of which Rosedale said could be “attributed to extremely light markings that the tabulation machine could not pick up” but that volunteers’ eyes counted as votes during the recount.

Percentages in all three counties fell within the margin “reasonably attributable” to human error, according to Houck, and certainly in stark contrast to the supposed 8.4% swing in favor of Biden that Lindell claimed happened in every Idaho county through internet hacking — even in those with no computers used in the vote-counting process (Butte and Camas) and no connection to the internet (Bonner).

Despite what Rosedale and Houck see as a successful endeavor to disprove Lindell’s claims, not all of Bonner County is celebrating. In an Oct. 1 statement, Bonner County Democratic Central Committee Chair Linda Larson shared that while Rosedale requested that the committee ask local Democrats to participate in the recount, “with full confidence in our election process, concern for the safety of our volunteers, and out of respect for our health care providers during the current COVID-19 pandemic surge, we respectfully declined.”

“Democrats have been observing elections in Bonner County for decades, including the Nov. 3, 2020 presidential election, as poll workers, poll watchers and poll judges,” Larson continued. “We have full confidence in the integrity of our elections. We believe this recount is not warranted.”

Still, through contacting poll workers, Rosedale was able to ensure that self-identified Democrats were present at each tabulation station during the Oct. 2 recount.

“I wasn’t in agreement with Mike Lindell when he came out with [allegations against] all these counties,” Perry told the Reader. “For Idaho, I thought it wasn’t right. So when I heard that Idaho was recounting, I was happy to be asked. In Idaho, it doesn’t sound right.”

An Oct. 6 media release from the Idaho secretary of state estimates the Butte and Camas County recounts cost their office about $2,500 and the Bonner County review cost around $4,000. These costs will be covered by “federal grant funds earmarked for audits in 2018 by the secretary under the Help America Vote Act,” according to the SOS office.

“We had set aside a certain amount back in 2018 anticipating that we would have costs for audits or costs for follow-ups at some point in time, and we wanted to keep that earmarked,” Houck told the Reader, noting that even three years ago, “we were considering the need for audits to prove the integrity and credibility of the election and to show the accuracy.”

According to the SOS release, “the secretary’s office has offered to reimburse any expenses incurred at the county level from the same funds.”

Rosedale said that all but one of his elections office employees present at the Oct. 2 recount are on salary, meaning that the only costs the county accrued, by his estimate, are the wages needed to pay for that employee’s 10 hours of work.

For Rosedale, this is the end of the road regarding Lindell’s claims.

“I’m not planning on doing anything,” he said when asked if he would pursue any more communication with Lindell. “I cleared Bonner County’s name.”

SOS officials shared in an Oct. 6 press release that “no further review of this data is planned by the office.” Houck said he has not had any first-hand contact with Lindell, but when a reporter with Talking Points Media asked him if he’d be willing to meet with the My Pillow founder, Houck replied by noting that “the secretary of state’s office is a public office.”

Houck told the Reader during the Bonner County recount that when false information is widely distributed and “nobody dismisses it as a fallacy,” it often becomes “accepted as reality.”

“If it is within … our capacity to help dismiss it, at least regarding our space, with some level of assuredness or statistical reasonability, then that seems prudent to me to do so,” he said.

“Bottom line: Lindell’s data is garbage, at least with respect to Idaho,” Houck added in a follow-up interview with the Reader. “The information that he put out is a patent fallacy. What other states choose to do with that is up to them, but our state certainly encourages others to likewise stand up for the integrity of their elections.”