A video of a North Idaho man shouting racial slurs at a Spokane church youth group in Coeur d’Alene is making the rounds on social media. 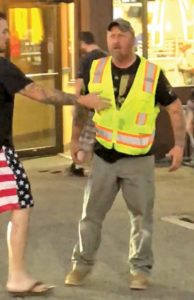 The video, obtained by the Inlander, shows Richard Sovenski, 52, screaming profane, racist and homophobic language at an interracial group of teenagers outside a Coeur d’Alene McDonald’s on July 12. The Inlander reports that Sovenski was arrested Tuesday for the incident and is charged with one count of misdemeanor battery and one count of felony malicious harassment.

In the video, the conflict between Sovenski and the church group is already in progress. A man accompanying Sovenski is trying to create distance between him and the teenagers as the older man shouts, “Why don’t you get a f***in’ job? I will f*** you up in a f***in’ heartbeat.”

“That’s why I don’t come to Idaho,” remarks one member of the church group early in the video.

“Yeah! That’s why you don’t come to Idaho!” replies Sovenski.

Before the video ends, the man who had been trying to separate Sovenski and the teenagers grabs his crotch at the church group as they leave.

The church group leader, Jose Ceniceros, told the Inlander that they visited the McDonald’s for ice cream after listening to a guest preacher in Coeur d’Alene. He claims that Sovenski sucker punched him and threw him to the ground. Sovenski may have been upset by the teenagers’ behavior, as a woman accompanying him told police they were “being rude, dancing and running around causing a disturbance.” Ceniceros told the Inlander that characterization is not accurate.

It’s another high-profile incident of racial harassment that concerns Human Rights Task Force members in Kootenai and Bonner counties. Founded in response to harassment and criminal activities of the Aryan Nations in the 1980s, the task forces have had their work cut out for them in recent years. The Bonner County task force, in particular, has been active in combating recent distribution campaigns of racist hate flyers in Sandpoint over the past two years.