Late fall through early winter, when the snow is thin and the wind is cold, I watch the birds migrating through the gray overhead, and my thoughts turn to travel. Maybe a trip to see my gypsy grandma in Dallas, or a hop over to Omaha to visit my boyfriend Dan’s chaotic herd of nieces and nephews. Fall mud season is the worst season of waiting there is, and so I often plan my getaways for this time of year.

Fact is, much as I love Sandpoint, we’re spoiled here. I need travel to remind myself of the big world full of strange people that lies “just out there.” So, like it or not, I budget carefully for a few months, book a plane ticket, and push myself out the door for some edumafication. 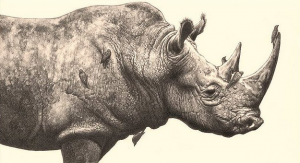 Much of my childhood education revolved around travel. My parents had this magical ability to combine work, family or other necessary voyaging into these enormous, intercontinental trips on a shoestring budget. It helped that my parents’ work kept us overseas most of the time… but, when I say shoestring, I mean shoestring. We were rarely far above poverty level, so no matter what country we trekked through, the scenery was usually enjoyed from a tent and fueled on car lunches of peanut butter and jelly sandwiches.

There’s no better way to learn about people, cultures or animals without getting up-close and personal. This is how, in the sixth grade, I wound up face-to-face with an angry rhino child.

It was my dad’s fault, of course. Dads always get the blame for this sort of thing. We were at a rural African wildlife park, and one of my parents’ friends had told them, “Make sure the kids don’t miss the chance to pet the baby rhinos.”

“They’re kept under guard near the camping area,” John had said, “and there’s usually a couple of guys there with guns making sure they don’t get picked off by lions.”

Sounds idyllic, doesn’t it? So, off we went on a short walk from our campground to give the little wrinkly buggers a friendly scratch.

If I was ever asked to make a list of preparations for your first face-to-face with a baby rhino, it would look something like this:

When you are carefully choosing your rhino-meeting clothes from your backpack inside your family’s tent, do not put on a red T-shirt. Red is not a calming color. Red is a good “come-to-Jesus” color.

Do not trust your friends, family, or whomever it was that connived to get you to this place. They are out to get you. Proof of this will be shortly staring you in the face … through beady little rhino eyes, glaring up at you from hip-height, in front of 1000 pounds of stocky rhino flesh.

Do not trust the man with the bloodshot eyes who’s reclining half-conscious against a nearby tree trunk with an AK-47 in his lap: “Oh, yeah, you can pet them. Go ahead.”

For one thing, that AK-47 is to keep lions from snacking on baby rhinos, which begs the question—why are we here? (And also, please note that this semi-conscious man seems more concerned about the piece of grass he’s chewing on than your well-being.)

“Go for it, Anna!” my dad said, taking an enthusiastic step backwards.

I have this reputation in my family for doing dumb things at a moment’s notice. Being the firstborn of my crazy parents, and a gullible, optimistic, trusting child at that… Well, you know. It’s not my fault I’m a slow learner. So, yes, I trusted my dad and stepped forward.

So did the rhino. Multiple steps actually. Very quickly. With his head and stubby little horn lowered.

And that’s how I wound up on the ground, with noticeable pain in an area that would have rendered a boy infertile, with suddenly-agile AK-47 Guy waving his arms and herding a rhino away from me. My mom was understandably concerned. The guard’s cohort tried to be reassuring — “Oh, they do that sometimes.” This did not decrease her concern.

I think my mom only relaxed after I reported back from an exploratory bathroom trip that my piss was a normal color. As with many things in Africa (and in middle school as a whole), if you’re not peeing blood, you’ll probably pull through just fine.

And I was fine, of course, other than being sore you-know-where for the rest of the day. My parents’ friend John probably fared worse than me, because when they were listening to the trip report from my parents a few weeks later, his wife was there, and she spun on her heel, hands on her hips, glaring at him. “What?? You didn’t tell them the same thing happened to my sister when we were there?” John grinned sheepishly and muttered something about in-laws and fled the room before her glare could materialize into a noisy slap.

Recently, my vacations haven’t been as dramatic due to financial and work constraints, but I try to tuck a bit of nonsense into each trip I do make. For instance, my brother Phil now lives in Alaska with his growing family. Rather than visit him in the summer, like the sane members of my family do, I dragged Dan to the edge of the Arctic Circle in the first week of December last year. My logic went like this: “It’s only going to be -20 degrees. If we went in two weeks, around equinox, it’d be -55 degrees. And I want to see the northern lights. Don’t you want to see the northern lights?”

By the end of the trip, we had indeed seen the northern lights, and soaked in one of the coolest hot springs I’d ever seen; and pretended my niece was a kitten to her heart’s content; and ogled dinosaur fossils in Fairbanks; and frozen ourselves so utterly that the Inland Northwest felt downright balmy as we hit the curbside at GEG.

Travel is like vitamins. It keeps us healthy, partly because we learn stuff, and partly because even the best vacations make us grateful for home. So, when you do have to leave Sandpoint, take an open mind and a playful heart. (But never, ever pet the rhinos.)

PollyAnna lives, loves, and writes from Sandpoint, where she’s petted fish, tree frogs, a turtle, a finch, a crawdad, a newt and multiple snakes, but has yet to corral a single squirrel.