The Idaho State Board of Education at its Aug. 29 meeting unanimously approved the sale of the Sandpoint University of Idaho Boyer property for $4 million. The buyer, according to ISBOE documents, is local contractor Tim McDonnell.

UI Vice President of Finance and Administration Brian Foisy told the board that university officials were in the process of listing the 75-acre property when they “literally received an email with a $4 million offer.” He noted that the offer lands almost directly between the two appraisals the university received for the property: one for $2.8 million, the other for over $5 million. 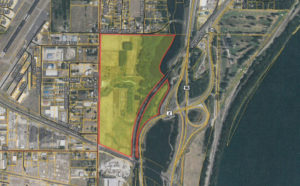 An aerial view of the Univ. of Idaho property on North Boyer. Courtesy image.

“We believe it does represent the fair value of the property,” Foisy said of the offer.

When the board questioned Sandpoint community support for the sale, Foisy said “it would depend on the community member that you ask.”

He said the property receives recreational use and noted that the city of Sandpoint had nearly two years to identify the funding necessary to buy the property. When the city couldn’t raise those funds, Foisy said the university decided to pursue the open market. Before completing that process, McDonell made his offer.

“I suppose it’s fair to acknowledge that there are some residents who would prefer that the university just donate the property to the city and move on,” he later added.

Such a donation is not in the cards for UI right now, Foisy said.

“The university is now in a position where we are attempting to fund the strategic priorities of the campus,” he said, “and to have an unutilized piece of property there is not really a fiscally prudent thing for us moving forward.”

ISBOE member Andy Scoggin asked why the university wasn’t moving forward with putting the property on the market to solicit higher bids. Foisy said one reason would be to avoid the commission cost of hiring a realtor. UI President C. Scott Green added that the university has recently invested in other properties across the state while planning for the sale of the Boyer property to “build up [the] reserves.”

“That market is extremely thin,” Green said of buyers for the Sandpoint property. “The amount of folks that would come out to bid on that property — they haven’t been beating down our doors.”

In the interest of saving on commission costs and keeping the $4 million price tag on the land, Green said selling now would be the university’s best choice.

“We just felt this was the right decision for both the state and for the university,” he said.

According to a purchase and sale agreement attached to the Aug. 29 ISBOE agenda, UI and McDonnell have until Dec. 11 to finalize the sale.