SR: Thanks for taking time out of a busy day to talk to us, Luke. You’re running in a pretty packed Republican primary for Idaho’s U.S. representative seat in District 1. What do you think you need to do to distinguish yourself from the other candidates? 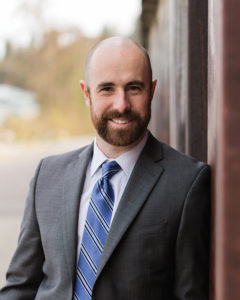 LM: I think the thing that distinguishes me from the pack is my reputation for being a hard worker. The reality is many people in Congress are going to work to solve hard problems, and that’s the reputation that I’ve built in the (Idaho) Legislature — that of a problem solver. Everything we’ve faced on a state level, I’ve been a leader on solving those issues and working with anyone that is willing to work toward a solution to make tomorrow better.

SR: So when it comes to the issues that need work, what are you seeing as your priorities? Let’s start on the state level.

LM: Well, I think health care is still one of the biggest issues, and the reality is we need to move toward more local and state control, we need better outcomes and above all we need lower costs. And that means we need to have more access in an affordable way. The reality is the federal government can’t provide that, so we need changes at both the federal level and the state level to help facilitate those outcomes.

SR: On that subject, what do you think of the health care proposals Gov. C.L. “Butch” Otter put forward and its recent failure in the Legislature?

LM: That was pulled from the floor yesterday and sent back to committee because they didn’t have enough votes. I am a fan (of the proposal), and what I’ve always fought for is more local control. What that bill did was say, “Listen, we have the ability to maintain and manage our insurance market better than the federal government can, so give us (that) authority.” Sadly, we didn’t do that, because I think that bill would have been really good at giving us more state power to reduce the cost of health care for all Idahoans. I’m disappointed it got pulled, and I hope something changes.

SR: Do you think changes can be made to the bill this session, or will it be kicked down the road to next year?

LM: I’m hopeful it will happen this year, I really am. But I don’t know that it will. I think it’s too early to say, and I think if anything happens, it will be toward the end of the session.

SR: As for issues on the federal level, what do you think are the biggest concerns facing the country?

LM: I think health care is a federal issue as well. We need representatives that are going to go back and work to give states and localities more control, to get the government out of our doctor-patient relationships.

… The other thing is that we have to work to build collaboratives. Just because the federal government has authority doesn’t mean that it has to cut the state out of the decision-making process. Federal land management is the number-one example of that, and we have the ability at a state level to help federal government manage land better.

SR: When it comes to Congress’ failure to address the health care issue, what has tripped them up on that and what can be done to address it?

SR: In the middle of that debate is the Trump Administration, which certainly has its own style of operation. How do you see yourself working with that administration?

LM: This administration has done a fantastic job of beginning to roll back regulations that have not been pushed by Congress but have been pushed by agencies. We need good regulations, but we don’t need frivolous regulation, and that is something that has been the hallmark of my legislative career. I’ll be aligned with the Trump Administration on that. When it comes to making Idaho a better place, the president will not find a more willing partner than me.

SR: What issues specific to Idaho do you think need to be brought to the forefront in this administration?

LM: You have to look at our traditional industries here in Idaho and see where the federal government has been stopping job creators from creating jobs. You look at mining, timber, agriculture, manufacturing, and you look across the spectrum from regulation to trade agreements to taxes: What are the federal policies that are keeping job creators from creating jobs that pay a good wage?

SR: With so many opponents in the Republican primary for this seat, where do you think the momentum is in this campaign?

LM: I think the momentum is in our favor. … People want members of Congress that will work on solutions. What we’re hearing as we spread our message is people want a conservative who is willing to work hard, skin their knuckles and do the hard work to make solutions happen.

SR: North Idaho is an area of the state that often gets overlooked, but being from here, you have a unique ability to engage with the region that other candidates might not. How are you reaching out to these voters?

LM: These are the people I grew up with. I was the northern regional director for the office of the governor, so I built a number of relationships from the Canadian border to Lewiston. I grew up hear in the Post Falls-Coeur d’Alene area, I spent time up in Sandpoint and my law firm has an office in Sandpoint. This is home to me. No Congressman has been able to say that since the 1950s.

SR: It’s still a long way to the primary election. What will your campaign do to stay engaged with the voters?

LM: We’re going to be doing everything we can to be spreading the message that we are going to work hard to come up with solutions for the problems that face the country. That’s what resonates with voters, and that’s the reality that we need people to understand. So we’ll do everything we can to push that message out … in social media and in person. We’re going to be traveling all over the district talking about my successes in the Legislature and what our district will look like if I’m in Congress.

SR: What are some of the most valuable experiences in your professional and public career you bring to the table?

LM: Being a small business owner has been among the most informative experiences to me. You need to navigate what success looks like not only for my business but for the people relying on it. That’s the reality most Idahoans who are voting are looking for.

SR: Is there any message or topic we didn’t go over that you want to send out to voters?

LM: I grew up in Idaho, and I want my kids and grandkids to grow up in Idaho. We need a good relationship with our Congressman to set our state up for the brightest future it can have. I don’t need to do this. I don’t want to live in Washington, D.C. But the reality is someone needs to put in the hard work to ensure we’re building a bright future, so that’s why my wife and I decided to do this.