Now that I’ve died from the bubonic plague and returned to the realm of the living (thanks, friendly neighborhood necromancer!), I’m ready to get back on my undead horse and start writing humorous summarizations of science. 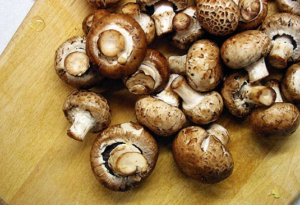 If the title of this article seems like a weird spell from Hogwarts, fear not: I have an explanation! Usually, I like to start off with the common name of an item we’re talking about, but this particular subject happens to have multiple names based on its usage, size, who you’re trying to impress and about 18 other factors.

See what I mean? It was just easier to go with the scientific name.

If you’ve ever found yourself at the grocery store stuck between white and brown mushrooms, puzzled as to what the recipe calls for, take solace in the fact that your decision has absolutely no bearing on anything. They’re both the same type of mushroom with the same taste and same nutrients. Once upon a time, agaricus bisporus had brown caps. One day, a farmer found a mutant patch with white caps and discovered that people preferred the “clean” look of the white mushroom, making it sell better. Several billion clones later, white button mushrooms are most of what ends up in your spaghetti sauce.

I find a twinge of irony in this, as we end up browning them with butter most of the time, anyway.

The white and brown mushrooms you get from the store are juvenile portobello mushrooms. If you want a beast to drop on your burger, just wait until it’s older to harvest it. This warrants an increased price since it takes longer to grow.

Growing and cultivating a. bisporus is an interesting endeavor, and one you can do from home if you’re well enough equipped. Other mushrooms, such as oyster mushrooms or shiitake mushrooms, grow by colonizing and helping decompose wood. Not a. bisporus. These bad boys need nutrient-rich compost to really thrive, much like the seedlings you grow every spring. Unlike seedlings, a. bisporus colonies need round-the-clock darkness, drawing most of their energy from the nutrients in the compost and manure and the humid air around them.

Watching mycelium colonization is always interesting. In the case of a. bisporus, it’s an almost alien affair. The spores will infect sterilized grain and incorporate the grain seed into itself. Like a zombie virus. Or the cordyceps fungus. While colonizing a heap of compost, the “seedlings” will shoot out little fingerlike tendrils in all directions through the soil. With an acceptable base, the core will finally start sprouting the mushrooms that we eat. (There are a lot of steps we have to take between those two points to make edible mushrooms, so look it up online!)

You can literally turn a mountain of poo into a delicious banquet. I mean, you’re going to want to wait for the mushrooms to grow at least, but still.

Ever notice that the underside of the mushroom cap is textured in a really funny way? Kind of like the pages of an old book. These are called gills. The gills are a brilliant adaptation of nature. The purpose of the gills is to provide a surface where the mushroom can safely produce microscopic spores. Rather than just having one flat surface to do this, the mushrooms wisened up and created dozens. How did nature figure that one out? Mushrooms that mutated to have more gills had a higher probability to successfully reproduce than ones with less surface area, passing those mutated genes on to new mushrooms that would mutate to become even more efficient. Evolution in a mushroom cap.

Mushrooms produce a lot of spores. Individual ones are so small that you can’t see them with your naked eye. Ready to learn a cool trick?

Harvest a mature mushroom. Cut the stem pretty close to the cap and set it down on a piece of black or white paper, then put a drinking glass lip-down overtop of it, like you’re sealing it away. Leave it there overnight, and the next day remove the glass and the mushroom cap. The cap will have left a spore print, like a fingerprint but for a mushroom. This is a key tool in identifying mushrooms that look similar. A. bisporus will leave a brown spore print, while the destroying angel mushroom will leave a white spore print.

Spore printing alone isn’t a fool-proof tool as to whether or not you should eat a mushroom. If you’ve picked a wild mushroom and are trying to figure out the best way to know whether or not it’s safe to eat, here’s a little trick: Just don’t eat the dang thing. If you’re considering starting your own mycelium colony for homemade pizza, only buy starts from reputable vendors. Learn how to do it from other people, first. Give the North Idaho Mycological Association (NIMA/North Idaho Mushroom Club) a buzz.  They’ve done some great programs at  both library branches.

Mushroom poisoning is no joke; some of these freaky fungi can cause catastrophic organ failure in as little as 24 hours. To reiterate: If you’re unsure, just put it down. Ask a pro and equip yourself with knowledge. Otherwise, enjoy your portobello mushroom burger!