Tragedy of the common sense

Capitalism versus Socialism: a false dilemma

From a young age we are all inculcated with binary reasoning. An either-or form of logic which typically results in an excluded-middle (no in-between) paradigm, with only two alternatives: A or B. As children we establish a habit of black-and-white thinking when we observe the grown-ups around us — some liberal, some conservative (all dogmatic). We soon realize that our parents are a bit averse to “why” questions, and prefer questions that can be answered with a definitive “yes” or “no.”

In school we are taught about the virtues of group cohesiveness — our team versus theirs — and we quickly learn how the world works: We learn to pick sides (Macs are better than PCs, but I digress). Consequently, now that we are older, the debate is no longer “Star Wars” versus “Star Trek,” but capitalism versus socialism. 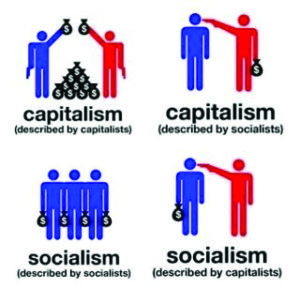 Unfortunately, because of our proclivity to pick a side and cling to it like a koala on a tree, we are commonly forced into extreme positions. If a particular party wants too many regulations, then the opposing party may demand complete and utter deregulation (or perhaps abolishing regulatory agencies altogether). Likewise, If party B acts like racism doesn’t exists, party A will contend that everything is racist. Few have the courage to deviate from the consensus of the group with which they belong. Our yearning for mental unity and our desire to belong further compound these contrasts.

If we scratch beneath the surface of the economic systems throughout the world, we will discover that there are no completely capitalist or completely socialist economies. Moreover, there is no such thing as a “free” market. The marketplace does not reside in some parallel universe separate from the government. All economies are mixed economies: amalgamations of public and private sector industries (all with regulatory mechanisms of differing degrees). Sorry purists, this includes the United States.

Corporate bailouts are not a particularly good example of government intervention. Many refer to this as “socialism for the rich and capitalism for the rest of us.” But what about Medicare, Social Security, public schools, libraries and college grants? These are all socialist programs and institutions that even most conservatives approve of. Most people, however, do not think of these programs as socialistic.

In 2009, during the Obamacare debate, protesters were marching with signs that read, “Don’t steal from my Medicare to support socialized medicine,” and “Get your government hands off my Medicare.” Seemingly oblivious to the patent contradiction, many people hate socialism but love the socialist programs that they are on. But any government program that they don’t personally benefit from, well, “That’s socialism!” It’s kind of like a love/hate, fatal attraction situation. “Social programs; if I can’t have you then no one can.” Indeed, people often oppose government spending unless the money is being spent on them.

Some individualists assert that by allowing everyone to pursue their own self-interest we will all be better off. They claim that if we just get the government out of the way then businesses will produce even better products at even lower prices, and Adam Smith’s invisible hand will stabilize the market. This belief, however, is not borne out by the facts. Without anti-trust laws mergers and acquisitions would result in less competition, and more monopolistic power and abuse. Consumers don’t have much purchasing power when they can only buy from one company. Likewise, companies aren’t incentivized to create better products when they know buyers have only one option. Planned obsolescence is a byproduct of to few (not too many) regulations.

The tragedy of the commons is basically a tragedy of self-interest. Left to our own devices most of us endeavor to drink from the glass, but never fill it. Although this is a proclivity some would have you believe is exclusive to liberals (the takers), it is a phenomenon that is not exclusive to any group or party. Corporations are not concerned with externalities (environmental devastation, rising cancer rates, etc), but only profit. This too, is a tragedy of the commons. Hence the need for a regulatory mechanism to diminish the harmful effects self-interest.

Corporations, unsurprisingly, do not want to be taxed and regulated. Therefore they spend a lot of money trying to propagandize people into believing that taxes and regulations are always bad (and that climate change is a hoax, nicotine is not addictive, lead is not really dangerous, etc). Consequently many people inadvertently vote and act against their own interests.

The private sector does not always offer a viable solution to issues like health care. And if Adam Smith’s invisible hand cannot be trusted to check your prostate, a public sector solution might be a better option. Moreover, when wealth becomes too concentrated in the hands of the few, a progressive tax system can be implemented to mitigate the inequality.

Perhaps he’ll be more receptive to the point if he hears it directly from his tricorne hat wearing champion. In 1785, Thomas Jefferson wrote, “Another means of silently lessening the inequality of property is to exempt all from taxation below a certain point, and to tax the higher portions or property in geometrical progression as they rise.” Damn you, Jefferson! You commie bastard!

Another gentleman named Thomas from the same era, Thomas Paine, also argued that the wealthy should be taxed at a higher rate in order to help pay for the needs of the poor.

Unfortunately we’ve shifted so far to the right on economic issues that what was once considered left of center social democracy is now considered “theft.”

This is not a case for “soaking the rich.” Nor is it a case for or against the profit motive. It is merely a contention that not everything is binary. When we all hate taxes but love the commons, it’s not a question of capitalism versus socialism, but a question of how much socialism you want with your capitalism?

Because like it or not, we’re all capito-socialists now.