Tolerance is not a dying virtue

In the mid-1950s, a 7-year-old Gary Buck witnessed an act of compassion that stuck with him all his life. His father, a truck driver that had lived in Sandpoint since he was 10 years old, saw a black hobo standing on the side of the road on his route.

“He was holding a half-eaten apple that someone had thrown at him from a moving car,” Buck said.

Instead of driving by, Buck said his father stopped and helped the man. He gave him a lift and drove him through Sandpoint to “Bum Jungle,” so the man would be safe. Later, he and the whole family returned with a load of groceries and supplies to help the man get to his family in Chicago.

“My dad drove for the Hedlund Lumber Co. right here at the poleyard (in Sandpoint),” Buck said. “He would’ve been fired, just for the guy being in his truck. I think he had a sense of fairness.”

Buck said his father was worried about the hobo’s safety because of racist attitudes evident in those days. 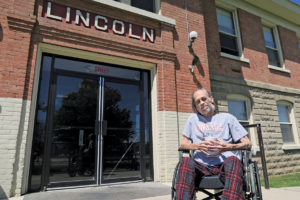 Gary Buck in front of the old Lincoln School where he attended first through sixth grade. Photo by Ben Olson.

“This was when, in the 1950s, there was a sign that hung on the end of the beach that read, ‘N—-s don’t let the sun set on your black ass in this town.’” Buck said. “It was signed by the Posse Comitatus. People would tear the sign down, but it was put back up repeatedly. This was a great town, a great place to grow up, but we just didn’t have any exposure to black folks. No exposure to other cultures.”

After the incident with the hobo, Buck began writing poetry to make sense of the injustice he saw in life. Themes often centered on equality, fairness and shedding light on injustice and intolerance.

“I felt helpless,” Buck said. “It feels like writing is all you can do sometimes.”

After high school, Buck spent three years fighting forest fires for the U.S. Forest Service before joining the Army National Guard, serving from 1969-1975. After the National Guard, Buck worked in Alaska with the pipeline before returning to his hometown of Sandpoint to work construction – a field he remained in for the rest of his career. One of his jobs was to build numerous homes inside the Coeur d’Alene Indian Reservation.

“I met the love of my life there: Martha,” he said. “They took me into their family. It was my first exposure being a minority, actually.”

Buck and Martha, a member of the Coeur d’Alene Tribe, remained together from 1986 to recently, sharing 17 grandchildren together.

In the late 1970s, Buck had a chance encounter with Richard Butler, the head of the erstwhile Aryan Nations compound in Hayden. The meeting left an indelible mark on Buck.

“I was at the Owl Cafe in Hayden having lunch with my Native American crew,” Buck said. “We walked in the door, and everybody in the place jumped up. I realized who it was and made a point to walk around him. We paid our bill and I told my crew, ‘Let’s get out of here.’ His people were just glaring at me, letting me know that I was with somebody who looked different.”

Buck memorialized the experience with a poem called “The Owl Cafe,” which ends with the chilling line, “Hearts black as coffee at the Owl Cafe.”

“We used to drive by their compound on Rimrock Road,” Buck said. “It had a big sign on the driveway that said, ‘Race is our Religion.’ Not long after that, a woman was driving by the compound with her son and her car backfired, so these idiots that I’d seen at the Owl Cafe left the compound, chased the car and shot her tires out. They thought the backfire was gunfire.”

Buck said this incident led to a lawsuit by the Southern Poverty Law Center, which culminated with Butler losing his Aryan Nations compound and the hate group moved on.

But Buck doesn’t necessarily see the race problem going away entirely, either in the country or the region.

“I went back to school in 1988 and I noticed, during the ‘90s, that people were still going to school with ‘White Power’ on their clothing,” Buck said. “I just don’t understand it.”

Tolerance seems to have run in the Buck family, as a matter of fact. Buck’s grandpa was a horse logger, yarding logs out of the woods with Clydesdales. His grandma cooked for the logging crew. Gary’s son, Gerod, shared a story about his grandmother that exemplified another instance of compassion.

“Grandma was ruthless when it came to racism,” Gerod said. “She was a lunch chef at a school in Spokane. One of the kids did something cruel to a black kid’s bike, so the next day she did the same thing to the mean kid’s bike and presented it to him.”

Over two years ago, Buck was given a heartbreaking medical diagnosis.

“It started out with prostate cancer, then got into the bones right away,” Buck said. “I had an operation two years ago, and they popped right back. They gave me six months, but that was two and a half years ago.”

Currently in Hospice care, Buck lives in an apartment that overlooks the Lincoln School where he attended first through sixth grade. He now spends as much time as he can with his two sons, Gerod and Jordan, as well as traveling to play pinochle with his mother when he can.

Looking back on a life spent respecting his fellow man, Buck could only offer words of inspiration instead of dwelling on his medical situation.

“I always treated people with respect and pretty much got it back,” he said. “I found out that many of the differences weren’t really there. Just respect people and put yourself in someone else’s position. That’s all I ever had to do to understand somebody. Some of us are aware right now, and some of us are just too set in their ways. I feel blessed to have grown up here, but I would rather see race relations get better. I’m afraid I’m seeing more fracture.”

To honor Gary Buck, we will be publishing a handful of his poems in future issues, only one of which has ever been published. The first poem is titled “A Trucker’s Story,” which is about the story of Buck’s father aiding a black hobo on his way to Chicago.

A Trucker’s Story
By Gary Buck

I remember the story… vividly after all these years.

Dad drove truck back then… his time was precious.

But as he crossed into Idaho from Spokane

Stumble to the ditch… bend low… and come up with

Watching in the rear-view… tears welled at its devouring.

ìGet in fella… maybe I can give you a lift.î

He learned that the man was headed to Chicago and family.

Maybe work… a roof… a full stomach… a sweet dream.

During the trip into Sandpoint… trying to show some respect

Dad warned the hobo… as to the local attitudes.

They called themselves the Posse Comitatus back then.

But back up again… persistent.

From the south. Also crossing to the east was a rail bridge.

Dad slowed to a stop… dropped his rider… explained his route.

ìHurry past the beach until you reach the trees to the north.î

Riders werenít allowed. Not with this hoboís dark, weathered face.

The company would can his ass for sure… jig time.

Dad promised to check up… after unloading later

Duties parked.. at home… family gathered in the car.

We shopped as a group… Mom, Dad, me and my two brothers.

She smiled knowingly… shaking her head.

We crossed the narrow bridge at the end of Cedar Street

Past the train depot… into the woods… parking near a campfire.

My brothers and I had never seen a black face until then.

We wondered why this man… became our fatherís friend.

Why did he continue to shake his hand… and cry?

And why would Dad… then reach into his pocket.

Giving money we would sorely miss?

Dad said he was helping his friend get back home… we understood.