To forgive is divine

For many small businesses in the Sandpoint area, the PPP — or Paycheck Protection Program, passed by Congress in spring 2020 as a part of the CARES Act — was a lifeline to keep many businesses operational and employees paid without interruption during the first months of the COVID-19 pandemic. Now, the forgiveness process has begun for business owners to document where their PPP loan was utilized, and if businesses followed the right procedures by applying funds to payroll, rent and utilities, the potential is high for most or all of the funds to be forgiven. 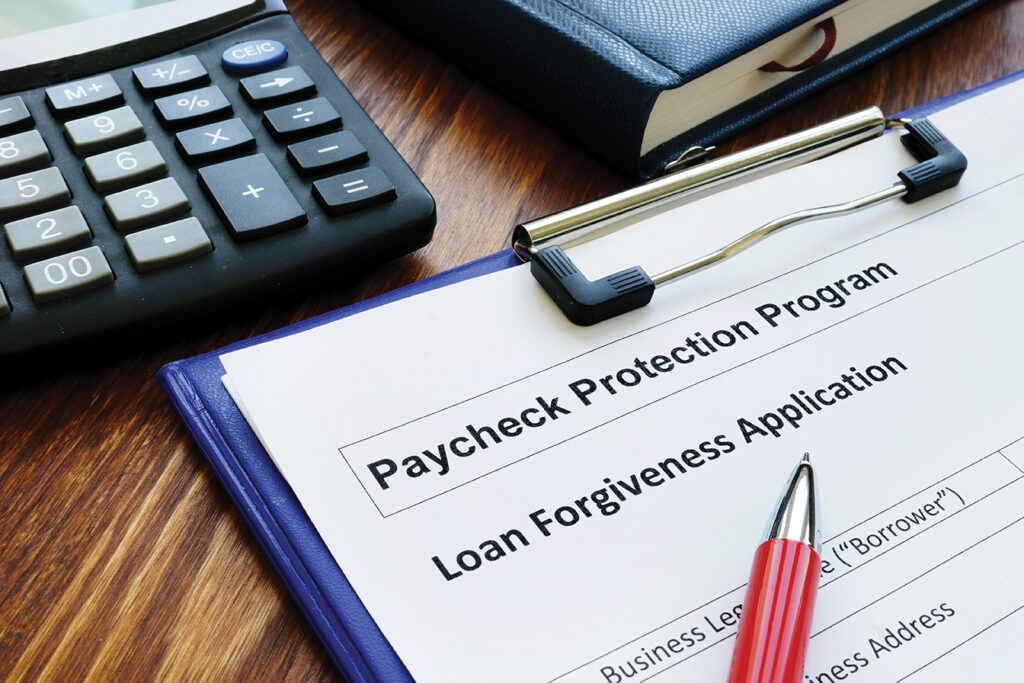 “I think people by and large were grateful that the money was available,” Paull said. “I think truly here in Sandpoint it bridged that gap for some businesses. It was definitely make or break for some.”

Paull said the Sandpoint branch of Washington Trust processed more than 70 PPP loans. Across its branches in Idaho; Washington; and Portland, Ore., Washington Trust handled more than 5,500 loans during a 10-day period in the spring for a whopping $1.25 billion in assistance. Keeping in mind that Washington Trust is just one of the many banks that processed PPP loans, it’s easy to see the real impact of the CARES Act on small business owners throughout the nation. The Small Business Administration reported that between April 3 and Aug. 8, more than 5 million PPP loans were approved, accounting for $525 billion in direct financial aid.

“Have very good detailed records of your payroll,” Paull told the Reader.

There was a potential for Congress to pass another round of stimulus, but Senate leaders redirected their attention to confirming President Donald Trump’s Supreme Court Justice nominee Amy Coney Barrett, pushing off stimulus talks until after the election. There have been discussions to include clarifications and possibly streamlined or automatic forgiveness for loans under a certain dollar amount — either $150,000 or $50,000 — but the total was never agreed upon and the stimulus talks ended with no results.

The Small Business Administration did roll out a simplified application, called Form 3508S, in October for businesses that received a loan of $50,000 or less.

Paull said those who received loans of $50,000 and under will not have to certify the full-time equivalent, which refers to retaining the same number of employees as before the pandemic.

“You don’t have to supply the documentation, but if you ever get audited, you’ll have to prove it,” Paull said.

When the CARES Act first passed in spring, the PPP loan provided eight weeks of support to cover payroll, rent and utility costs for a business to remain operational. Later, the eight-week period was amended to cover 24 weeks so businesses could use all their PPP funding to cover payroll costs.

“I think when the CARES Act first passed in spring, they chose an eight-week time frame because they believed everything would be done in eight weeks,” Paull said. “The second levy of funds had a 24-week window in it. So everybody had the option for 24 weeks or eight weeks.”

Paull said it’s important to include detailed payroll reports when applying for forgiveness, including the most recent 941 document, which denotes the quarterly payment of taxes.

While there is no immediate rush to apply for forgiveness — applications need to be processed 10 months from the date of the end of the covered period or loan payments will begin to be due — Paull said he encourages his clients to start the process now rather than waiting for potential new legislation from Congress that might streamline the process.

“It’s best to get it out of the way now,” he said. “Any client that is at $50,000 or under should apply for forgiveness to get it off their desk. The application is a shorter application, just one page, but you’ll still have to provide supporting documents.”

Washington Trust has set up an online portal for its customers to navigate the process. Paull also said that anyone who has questions about the process should discuss it with the banker who processed their initial application.