A lot can change in 30 years, but one thing has remained the same for the East Bonner County Library: the dedication of the Friends of the Library. 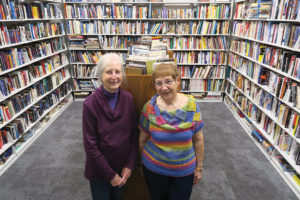 Gloria Ray, left and Pat Stevens,right, stand in a room full of Friends of the Library books. Photo by Ben Olson.

This nonprofit group of volunteers united in 1989 with a goal to assist and support the full range of functions at the Sandpoint branch of the library. Through its regular book sale, the FOL raises an average of $700 per month, which is placed into a fund intended to help finance various projects and services at the library.

The FOL will host its next monthly book sale at the Sandpoint Library from 10 a.m.-2 p.m. on Saturday, Oct. 5. To celebrate 30 years in the community, members of the organization are serving refreshments and have promised “surprises” for those who attend the sale — as well as offering all books at half price.

Pat Stevens, who has been with the Friends of the Library for its full 30-year history, said 90-95% of all books sold at the monthly event come from community donations.

“We do get some books as rejects from the library that might have a little damage, but most come as donations,” Stevens said.

Gloria Ray, a 27-year former employee of the Sandpoint Library, has also been a member of the FOL since the beginning.

“I was actually the library director, but I only lasted at that for two years,” Ray said. “I’m not good at telling people what to do.”

Stevens, Ray and the rest of the FOL volunteers work tirelessly each month to organize and separate thousands of donated books into genres and subgenres. Stevens said some of the more popular titles are mysteries.

The revenue collected from book sales all ends up supporting the library, Stevens said.

“The Friends has their own 501(c)(3), so when the library wants something, they come to us and say they want a new computer or whatever, and our board votes on it,” Stevens said.

Tens of thousands of dollars have been donated to the library by the FOL, which has been instrumental in raising awareness and helping the library to function, according to library Director Ann Nichols.

“They do so much,” she said. “They give us money for things we normally would not be able to buy on our own for particular projects. And they keep the community involved, which is one of their bigger roles.”

Nichols said one project recently funded by the FOL is a new tool for seniors and students called Google Expeditions, which are virtual and augmented reality headsets that will be made available at care facilities and schools — giving access to people who wouldn’t otherwise be able to travel. Not only that, but the headsets enable users to virtually travel to thousands of locations.

“They can use these virtual reality machines to go to Italy or whatever they want to do,” Nichols said.

Nichols said the FOL funded half of the Google Expeditions project — and it couldn’t have been accomplished without the organization’s help.

To support the Friends of the Library and score books for pennies on the dollar, visit the book sale Saturday, Oct. 5 at the Sandpoint Library, 1407 Cedar St.