The Swedish Forrest Gump — with dynamite

The literature and cinema of the Scandanavian countries has enjoyed a robust yet still niche following in the U.S. for some time — seemingly specializing in moody, violent police procedural dramas. The long dark nights, cold gray skies and sweeping landscapes of the former Viking lands seem perfectly primed as backdrops to desperate murders and growling detectives in black overcoats.

So it’s with some surprise to watch a film like The 100-Year-Old Man Who Climbed out the Window and Disappeared, which showcases a peculiar sense of Swedish humor that weaves whimsy with cynicism, toying with brutality while leavening it with absurdity. 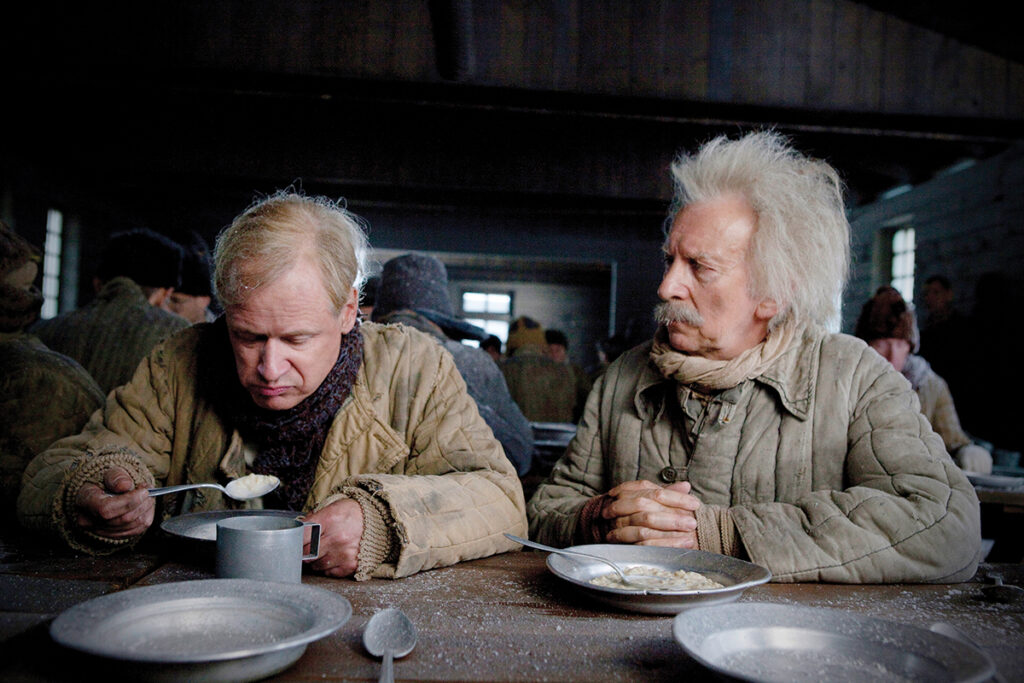 A still frame from ‘The 100-Year-Old Man Who Climbed out the Window and Disappeared.’ Courtesy photo.

As its title aptly describes, the 2015 film — with the same name as the best-selling 2009 novel by Jonas Jonasson — focuses on a man, named Allan Karlsson, who on the occasion of his 100th birthday decides to give the whole thing a miss and escapes through the nursing home window. From there, he embarks on an aimless yet chaotic journey through rural Sweden as well as the fantastical events of his own life.

The film opens with Karlsson in his tiny cabin in the woods, already clearly nearing advanced old age, as his beloved cat — Molotov — jumps out the window and disappears. Karlsson finds the cat has fallen victim to a marauding fox. Angered, the old man deftly constructs an explosive trap, which the fox quickly triggers — detonating in a bloody blast of fur, snow and parts of his own chicken coop.

That incident lands Karlsson in the old folks home, where he hilariously upsets a gaggle of care workers, local journalists and clearly annoyed family members when he’s nowhere to be found as they prepare to present him with a ludicrously candle-laden cake. Meanwhile, he’s shuffling to the bus station, bound for anywhere.

Fate intercedes at the station, however, when a chance encounter with a motorcycle thug ends up with Karlsson absconding with the guy’s rolling suitcase. Karlsson simply didn’t want to miss his bus, but by taking the luggage he has unwittingly placed himself at the crucial center of a criminal enterprise involving gangsters from Sweden to Bali. Bodies can and do pile up.

Karlsson is a simple man living in complicated times, though it soon becomes clear that his simplicity has acted as a kind of armor for navigating the (literally) explosive vicissitudes of his life.

Audiences are introduced to Karlsson’s early life, which takes a series of dark turns with the loss of his parents — his father executed by Russian firing squad for trying to establish a pro-contraception independent republic in downtown Moscow, while his mother succumbs to an illness. Moorless, young Karlsson spends his days blowing things up, first with firecrackers then bigger and bigger homemade bombs.

A grisly, yet comedic, accident lands the orphan in an asylum, where he grows into his distinctive quirks. Mutilated by a sloppy sterilization surgery, Karlsson has only three real ambitions upon leaving the asylum as a young man: “eat, sleep and blow things up.”

He’s in luck, as the rest of the world in the early 20th century is precisely as preoccupied with blowing things up as he is.

First stop: a weapons foundry, which leads him to serving as a demolitions expert fighting with the Republicans in the Spanish Civil War. From there, the story embarks on a sort of Forrest Gump-meets-Bad Grandpa-meets-Lock, Stock and Two Smoking Barrels as the dual narrative of past and present brings Karlsson into contact with everyone from world leaders like Franciso Franco, Harry S. Truman and Joseph Stalin to a trio of fellow screwballs who transform — somewhat reluctantly — into his centenarian running crew.

The history in the film is almost completely invented, and the shifting temporal perspectives get a little wearying; but, overall The 100-Year-Old Man is simply a really good time and proof that the Swedes can be just funny as they are dark and dour. Stream it on Amazon Prime.

Tags: the 100 year old man reviewthe 100-year-old man who jumped out of a window and disappeared reviewZach Hagadone movie review