The building at 419 N. Second Ave. is arguably the most iconic in Sandpoint. The Spanish colonial revival-style brick structure, built in 1927 and dedicated in 1928 as the Sandpoint Post Office, has since served as the Bonner County Library and, most recently, as the offices for First American Title Company. Soon it will take on a different role as the new home for MickDuff’s Brewing Company’s brewpub. 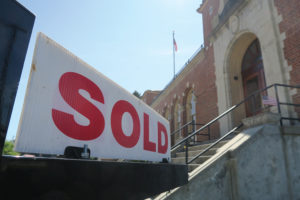 The sold sign outside the future MickDuff’s location. Photo by Zach Hagadone.

“It’s the most stressful, exciting day ever,” MickDuff’s co-owner and CEO Duffy Mahoney told the Reader in an interview Aug. 20, shortly after announcing that he and his business partner/brother Mickey had taken possession of the keys to their new kingdom.

“Having the opportunity to own a piece of history in probably one of the most well-built buildings I’ve ever seen … it’s like a castle inside,” he said.

The approximately 12,000-square-foot building will first require asbestos removal, then Duffy said MickDuff’s will close on a Small Business Administration loan to perform the necessary remodels. All the while, the brewery will have to work closely with the Sandpoint Historical Society to ensure its many early-20th century features and flourishes remain preserved.

“They have to approve everything we’re planning on doing,” Duffy said. “We have to take a picture of how it stands now then come up with what it’s going to look like.”

“We love the building, the history and are excited about this next phase in our business in Downtown Sandpoint,” Mickey, who serves as director of Brewing Operations, wrote in a Facebook post Aug. 20. “We plan to keep it as original as possible while we make upgrades and remodel it for our restaurant’s use.”

A yet-to-be-identified local contractor will repair and preserve the historic single-pane windows — complete with brass counterweights — and the interior design will skew period-appropriate.

“Instead of going industrial, which I think is on its way out, we’re going to go English-Irish pub — a little more ornate, to keep with the style of the building,” Duffy said. “The whole building is so neat; stuff you’d never do these days. For instance, all the plumbing is brass.”

Other planned changes include putting a three-barrel pilot brewery in the basement and removing a part of the first floor to create a viewing area from what will become the main dining room. In addition to the dining room and bar, the first floor will also house an expanded kitchen. The top floor will be given over to offices while the bathrooms and entrances will be made ADA accessible. Finally, the concrete ramp on the south side of the building will be raised three feet to accommodate an outdoor patio finished with brick pavers.

“We are extremely excited about our expanded dining room and to finally have an adequate size kitchen,” Duffy wrote on Facebook. “Plus, because everyone loves a patio, we will have a large dining area outside for summer months.”

The hoped-for opening date will come sometime in June or July 2020. In the meantime, patrons will continue to visit MickDuff’s flagship location at 312 N. First Ave.

Duffy acknowledged that the brewery’s current space on First Avenue — where it all started in 2006 — is “probably one of the best locations downtown and it’s been a key to our success.”

That said, relocating to Second Avenue brings with it 28 parking spots plus additional street parking. Another bonus is proximity to MickDuff’s Beer Hall, which will remain exactly as it is, a stone’s throw away at 220 Cedar St.

In their Facebook post announcing the new space, the Mahoneys thanked Realm Partners real estate, Mountain West Bank, Boden Architecture, Panhandle Area Council and First American Title for helping achieve the crucial step in their expansion and relocation. They also committed to hiring local contractors and subcontractors as work on the building begins in earnest.

“Sandpoint is so special, we truly couldn’t dream of owning this business anywhere else and we have our loyal customers to thank for this expansion,” they wrote. “After 13 years, we are excited to be investing in and adding to the vitality of downtown.”