So sorry, Sara Lee. There’s no lovin’ coming from my oven any time soon. There’s no love coming from my stovetop, either. Trying to stay cool in this unprecedented, triple-digit weather (in June!) is not for the faint of heart, and I can’t stand the heat, so I got the heck out of the kitchen.

Who’s got time to cook, anyhow? It’s a full-time job just trying to rotate and water my potted vegetable garden, keep the house cooled down and keep myself well hydrated. Though I must admit, hydration was not a problem last Saturday, when I participated as a competition judge (someone had to do it, right?), at MickDuffs’ inaugural Championship BBQ Competition. I was one of five judges, gathered ‘round a long table in their (nice and cool) beer production space, where we tasted some impressive entries while sipping plenty of palate-cleansing, cold beer (it was The Irish Redhead for me).

Each competitor presented us with a half of a fully jointed BBQ’d chicken and nine individual pork spare ribs. Our judging criteria were based on appearance, taste and tenderness. It was hard work, but we were all in, tasting and scoring bites of BBQ that had been rubbed, brined, sauced and coaxed to perfection by the seven master grillers who were competing for the coveted prizes.

Outside, all kinds of big rigs and grilling apparatus filled the entire parking lot. The patio tables were filled with lively (and hungry) locals, and the air was filled with live music and wafting BBQ aromas. Amidst grooving to the music and the merriment, we judges turned in our final scores, which were carefully calculated and rechecked for good measure, before presenting the prizes.

Out amongst all the carefree people who were having such a good time, it was easy to forget we’d just spent a year in lock-up. Later that evening, the sidewalks on Cedar Street were dotted with outdoor tables and chairs, filled with patrons relishing food, beverage and the musicians we’ve been missing for oh-so long. I saw (and hugged!) scores of friends and honestly, it felt so good and celebratory — just like old times! And then, it didn’t.

Two days later, it was as if I was passing through Hell’s Kitchen, on my way to Dante’s Inferno. I still can’t begin to wrap my hot head around this heat anomaly. Can you? Plenty of folks, in an attempt to “beat the heat,” headed straight to a favorite, air-conditioned restaurant. But before we could even get a menu in our hot little hands, Facebook was filling with posts from foodservice owners and workers, and friends, announcing modified menus, revised service protocol, and even closures. All the while, in my head, I can’t let go of Ella Fitzgerald’s tune, “It’s Too Darn Hot.”

Yes. It is too darn hot, and there’s no reprieve. And nowhere as hot as a commercial kitchen. While the guests in the front of the house enjoy cool air and frosty libations, the back of the house is sweltering in a kitchen so hot that the indoor temperature can easily exceed the temperature outside. If you’ve ever worked in one of these kitchens, you’ll agree, they’re notorious heat traps — or worse. I once suffered heat prostration in the galley of a railcar, and it’s nothing to take lightly. Often there’s no good remedy other than trying to generate some circulation and plenty of hydration (and countless, lingering trips to the walk-in cooler).

This year has been unimaginably cruel to our restaurant community. First COVID-19 closures, then closures due to staff shortages, and now they’re weathering yet another storm. They can’t seem to catch a break. So, if you decide to venture out for a meal, let me remind you that these folks are probably still working in hot and harsh conditions. The closures and reduced operating hours place even more of a burden on those who remain open. So, remember to be cool. Be patient and kind. Treat them well and tip them well.

If you decide to be brave and whip up a meal in your own kitchen (or a potluck dish for the weekend), this antipasto salad is perfect. It’s cold and crisp and travels well. If you can’t stand the idea of boiling a pot of water for pasta, substitute a couple of cans of drained cannellini beans.

Happy Fourth to you and yours. Be safe. Stay hydrated. 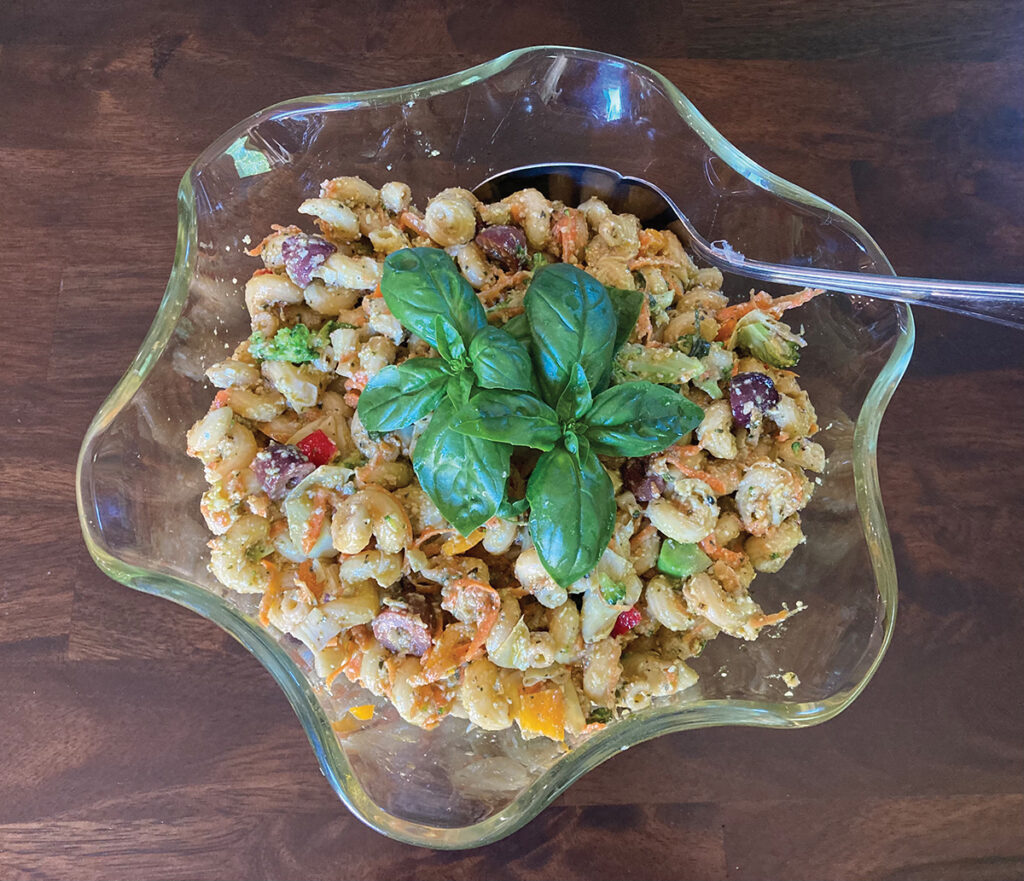 Serves a dozen of your best buddies. Perfect side with ribs or chicken, or as a main dish on a hot summer night. Lots of flavor, especially when made the night before. Omit the meat for a veggie version.

Boil pasta according to package directions.

Drain and rinse with cold water. Allow to completely cool to room temperature.

In a large salad bowl, mix pesto and olive oil, add pasta, toss well. Add all the remaining ingredients and toss to combine well.  Adjust seasoning. Chill for at least 4 hours before serving (overnight is better).