The ride of your life:

“Life can be unpredictable, bumpy and harsh. Same goes for snowboarding.”

For Nick Appl, snowboarding is more than just sliding down a hill and yelling “yippee.”

In Appl’s new book “Snowboard Wisdom: 100 Reflections on Life and Riding,” he uses the sport of snowboarding to pose several reflections on life in general.

Billed as “the culmination of … 20 years riding a snowboard and 10 years of daydreaming about snowboarding in relation to human psychology,” Appl’s book is one of those books that you can read all at once, or a little each day. 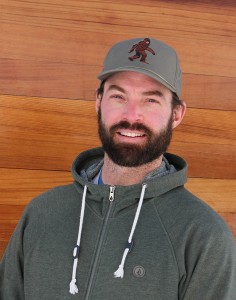 Reflection #63 reads: “Keep Moving. Ever notice how difficult it can be to stand still with both feet strapped into your board? Life resembles this characteristic of boards in the sense that idleness leaves us vulnerable to falling. Snowboards are designed and built for mobility. People seem similarly intended for creative and productive action. Keep moving, exploring, and enjoying so you don’t tip over.”

Appl considers this book an outlet for his dual lives as a snowboarder and mental health specialist.

“I was just randomly writing stuff down whenever I had a thought,” he said. “Some of them came from work experiences where I’d lead a group session with a topic. A lot of them just came while I was riding and thinking about stuff.”

Appl first starting having the inspiration for this book while he was studying psychology in his late twenties and on the cusp of becoming a new father.

While Appl sat through countless lectures on psychological theories of human behavior, he began to relate the cumbersome topics to situations he’d had while snowboarding.

“It didn’t necessarily change any of the concepts,” he wrote in the introduction, “But it did make them more interesting and I was more engaged. The seed was planted.” 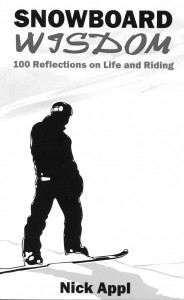 Ten years later, after the usual phalanx of rejection letters from publishers, Appl reached his “point of burn-out on the front lines of the mental health battlefield.”

He contacted local company Keokee to design and layout the book, and was recommended to illustrator Dan Seward, who provided artwork for the cover and inside pages.

“Dan was great because I just gave him the topics and seven or eight ideas and he ran with it,” said Appl. “He’s a snowboarder, so it didn’t take much explaining for him to get it.”

During the ten-year process it took to compile the book, Appl often found himself with writer’s block.

“I would get stuck,” he said. “I’d have an idea and didn’t know what else to say about it. Eventually, I pictured explaining it to my two daughters, to keep it short and simple.”

Upon publication, Appl hopes people can glean a bit of direction from the simple postulates he puts forth.

“One thing in particular,” he said, “everywhere I’ve gone, including living here and in Alaska, Colorado, Lake Tahoe, there’s a culture, even though each place is different. Each mountain has its own little tribe. But it doesn’t matter where you go, if they’re up there riding, they’re pretty happy and stoked on life.”

In the future, Appl hopes to continue writing sports-related reflections into book form.

“I’ve contacted some programs that work with underprivileged inner city kids, and I think it would be great to do another one on skateboarding or maybe surfing,” he said.

You can snag your own copy of Appl’s book at Vanderford’s Books, 7B Boardshop, at the Source on Schweitzer, or online at Keokee.com.