The last chance for Memorial Field?

Residents weigh the pros and cons of a local option tax

If you had to pick the most unpredictable factor to local elections this year, it’s almost certainly the proposed local option tax.

On the one hand, there’s no surer way to make some folks frown than mentioning the word “tax.” But on the other, this 1-percent tax on all sales in town is designed to fund the restoration of one of the most beloved gathering places in Sandpoint: the Memorial Field grandstands. Add into the mix that this is city officials’ second attempt to pass the tax—the first failed by only a couple hundred votes—and they have more time to conduct an information campaign, and it’s anyone’s guess how Sandpoint will vote come Nov. 3. 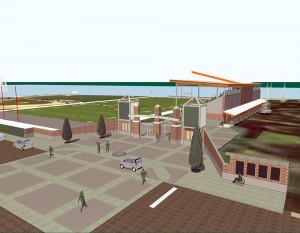 An artistic rendering of the proposed rehabilitation to the grandstands at Memorial Field. Courtesy of the City of Sandpoint.

What is a local option tax anyway? Well, according to Idaho law, cities of fewer than 10,000 residents have the option to levy an additional sales tax. These taxes are designed especially for resort towns like Sandpoint, where infrastructure is particularly burdened by visitors. For instance, both Sandpoint and Ponderay already utilize a similar system taxing hotel room rentals—colloquially called a “bed tax”—to draw revenue from tourists. The idea is to give cities an additional source of revenue that can in turn fund projects to draw in additional tourism.

The Memorial Field grandstands certainly fit that bill. A centerpiece of community events from high school football games to the Festival At Sandpoint to graduations, the grandstands have housed cheers and tears for nearly 70 years. However, according Sandpoint Parks and Recreation Director Kim Woodruff, the city found out 10 years ago that the grandstands’ days were numbered.

At the time, the city was able to do a patchwork $55,000 repair job that bought them time. However, everyone knew it was a temporary fix—the grandstands required replacing eventually. In recent years, an annual inspection determines whether or not the stands are still fit for service. Woodruff said every year, the degradation is markedly worse.

“Really, right now, we’re at a stop sign in the road,” he said. “We could go to the left, or we could turn toward the right.”

Public funding isn’t the first approach to repairing the grandstands. When the magnitude of the disrepair became apparent, local community members formed the Friends of Memorial Field to raise funds for new grandstands. The group staged public meetings to determine its design and features, and the city eventually approved a plan that struck a balance between affordability and aesthetic pleasure. It also included functional improvements like an expanded capacity of 1,500, a 67-percent increase from the existing grandstands. 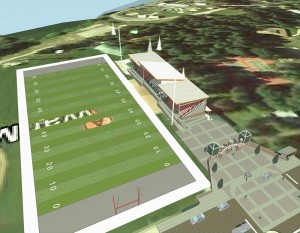 An artistic rendering of the proposed rehabilitation to the grandstands at Memorial Field. Courtesy of the City of Sandpoint.

The Friends faced their share of challenges. According to group board member Tye Barlow, the Friends hoped to raise the $2.75 million cost of the new grandstands through a combination of individual donations, business contributions and a handful of major corporate sponsors. However, the most likely corporations to foot major portions of the cost—Litehouse and Panhandle State Bank, for instance—were unable to follow through due to changing business circumstances. To make matters worse, leadership within the Friends went through several significant changes as members needed to move away or step down.

“It’s really too bad we’re needing to go this [taxation] route,” he said. “We really thought we could get the corporate donations for this.”

However, the Friends charted plenty of successes, too. In 2011, members contributed $85,921. Along with $80,000 from Lake Pend Oreille School District and $106,022 from the city of Sandpoint, the money funded the replacement of the Memorial Field lights, which had deteriorated into a dangerous situation.

With time running out for the grandstands, city officials decided to step in. In 2012, they coordinated with the city of Ponderay to propose a 0.5-percent sales tax for voter approval on each city’s November ballot. Per Idaho law, the measures required a 60-percent majority vote to pass. Both Sandpoint and Ponderay’s proposals failed, although the Sandpoint vote was extremely narrow. More than half of voters gave the tax their stamp of approval.

The local option tax is back this year as a 1-percent sales tax. According to the city’s data, the tax will raise an estimated $864,257 per year over its five-year lifespan. The first priority for the revenue use is the grandstands, followed by drainage and field surface replacement, then infrastructure repair, then general parks maintenance and infrastructure improvement. The measure also supplies the cost of collecting and administering the tax. The cost to taxpayers is $0.10 for a $10 purchase, $1 for a $100 purchase and and $10 for a $1,000 purchase.

For many residents, that cost will seem like a pittance they’d happily give up for community grandstands expected to last between 50 and 100 years. However, Alice Wallace of the Bonner Community Food Center says not everyone is so fortunate. Sandpoint families struggling to make ends meet or residents on fixed incomes will find yet another financial burden on their plate. This is especially true for taxes on groceries, which disproportionately impact the poor. She’s already heard many at the food bank worrying about the proposed tax, she said.

“I don’t think the tax should be on food,” she said.

“Many people are already coming to the food bank to relieve some of their food expenses,” she added.

However, the replacement of the Memorial Field grandstands likely hinges on the local option tax passing this year, Barlow said. As he campaigns for the field and taxpayer funding, he’s reminded of Jerry Kramer, a Sandpoint High School graduate who went on to a hugely successful 11-year NFL career for the Green Bay Packers. Kramer said that every time he prepared to step onto an NFL football field, he’d close his eyes and imagine himself back on the sidelines of Memorial Field. Those are the kind of dreams and memories Barlow wants to protect with restored grandstands and field improvements, and this tax may be the only way to do that, he said.

“I think this is our last chance,” he said.