The Hive ramps up its weekend events

For the last several years, local music venue The Hive opened only a few days a year for a handful of shows from touring bands.

Those days are over. 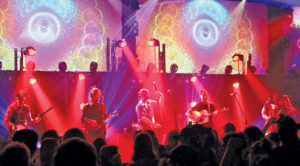 Now music lovers can expect to see the venue’s doors opened every weekend for an expanded variety of shows drawing from both regional and national artists. The expansion is happening under the oversight of general manager Rob Smith, who is leasing the venue from owner Jeff Grady to bring exciting events downtown every weekend.

“I’ve been the one coordinating and doing all the events over the years, but now it’s going to be every weekend,” Smith said.

The Hive team has honed the venue’s reputation for high-energy live shows thanks to its top-tier sound and light systems, expansive dance floor and friendly service at the door and at the bar. Smith is betting that the venue’s popularity will continue with a wider variety of attractions, from DJs to comedians to fundraisers for local nonprofits.

The expansion began last November when Smith received an email from Grady.

“He was saying he’d been thinking about the future of the Hive, and he asked if I wanted to lease the building to take complete control of operations,” Smith said.

Smith ultimately agreed to the new arrangement, and since March, he has worked to open The Hive doors every weekend. The idea was to carry over the venue’s high production values to additional music genres and show types. While The Hive previously relied on jam and funk bands for the lion’s share of its offerings, Smith now hopes to seek out bands representing country, indie, folk, world music, punk and more. The wider range of music will hopefully attract new audiences.

For instance, on May 4 — celebrated by “Star Wars” fans as May The Fourth Be With You — The Hive is bringing in Melefluent, described as a “potent cocktail of alternative rock, reggae, funk and blues with a hillbilly twist,” along with local band The Wow Wows. As an added bonus, those who come dressed in a “Star Wars” costume will receive a free drink ticket.

Along with a greater variety and frequency of shows, Smith aims to bring more community spirit to The Hive’s operations. He is implementing a new scholarship program in partnership with the Music Conservatory of Sandpoint, assisting low-income students with the cost of lessons and instruments. High school students aiming to move on to music school will also be able to apply for a scholarship every year. The scholarship program will be funded by a percentage of drink and ticket sales from several high-profile shows.

Along with the scholarship program are simple gestures like keeping the drink costs competitive with local bars or offering special rates to local nonprofits for fundraisers. Underlining the new business philosophy and sense of community is something almost everyone can get behind: a shared love of music.

“Music has throughout history been one thing that can bring all people together,” Smith said.