Even the fierce free-marketeer Margaret Thatcher hesitated to do it. As international rail expert Brendan Martin described it: “She starved British Rail investment, but she refused to privatize it.”  But finally in 1991 her Conservative Party fellows ousted her, and they liquidated the country’s last major public enterprise.

Between 1993 and 1997 British Rail was sold off to 100 separate companies, which then subcontracted with thousands more. Incredibly enough, at one time 2,000 small firms divided up maintenance on 20,000 miles of tracks. 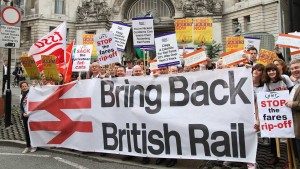 Many entrepreneurs got into the railway business, including airline magnate Richard Branson. Some became multi-millionaires, but others went bankrupt. The company Sea Containers thought it could succeed just well on land as it did on water, but it went bust on the East Coast Line. After another private company failed on this route, the government placed it back in public hands.

The new railway companies promised lower prices and better service, but fares (adjusted for inflation) are 24 percent higher than in 1995. Significantly, British fares are 50 percent higher than those on the government railways of continental Europe.  Passengers there are safer and travel at top speeds of 186 mph, 46 mph faster than the speediest British train.

Even though British train journeys have doubled since 1995, the stingy operators are not offering enough seats to their passengers. The British journal The Economist reports that “22 percent of passengers commuting into London and 16 percent of those travelling to Manchester have to stand.”

The British Guardian newspaper reports that the private companies have “punctuality problems, chronic overcrowding, and terrible consumer satisfaction ratings.” Poll after poll indicate that a majority of Brits want the government to run their passenger trains.

In 1948 a Labor Party government nationalized the four major rail lines, and over thirty years the main complaints were occasional delays and lousy sandwiches. There were about three times as many annual train deaths under public ownership, but most of those were due to signaling errors, now much reduced by better technology. Even so, both Britain and the U. S. are delinquent in installing safety systems, common in Europe, which could have prevented the recent Amtrak accident that claimed 7 lives and injured 200.

Significantly, since British Rail went private, there have been more than twice as many annual deaths due to poor track maintenance. For a period of time there were just as many train fatalities as road deaths, which have always been higher everywhere. Public outcry has forced the return of the tracks and their maintenance to public ownership.

Initially, the private companies were given government subsidies until they were able to work out the “inefficiencies” of government “maladministration.” The supreme irony, however, is that government aid was not phased out; rather, it has now risen to $6 billion a year, more than British Rail ever had.  In stark contrast, the larger, safer, faster nationalized German railway system requires a $1.2 billion annual subsidy.

America’s high-speed Acela attains 150 mph only on 35 miles of track on the Northeast Corridor. Amtrak runs on rails not properly maintained and unsuitable for high-speed traffic. Bridges and tunnels in the Northeast, half of which are over 100 years old, reduce train speed to as low as 30 mph. European trains cover the distance between Boston and Washington in less than half the time Amtrak does.

The worst bottleneck is the conjunction of tracks under the Hudson River between New York City and New Jersey.  Building a new tunnel required funds from New Jersey, but its governor rejected the idea. The existing tunnel was flooded by Hurricane Sandy and salt water corrosion will make it unusable in the next 15-20 years.

GOP Rep. John Mica is correct to call Amtrak a “third world rail system,” but the reason that the average age of its cars is 29 years and that train trip from Chicago to Denver takes five hours more than it did 85 years ago, is that congressmen such as Mica have refused to fund a first-world system.

The next day after the Amtrak crash, the House Appropriations Committee voted to reduce Amtrak funding by 15%.  Long-term infrastructure investment has made the European, Japanese, and Chinese railways world class, but ours will remain third world for the indefinite future.

Nick Gier of Moscow taught philosophy at the University of Idaho for 31 years. Read his column on the world’s high-speed trains at www.nickgier.com/020309_BulletTrains.htm