The darkest day, one year later

A year has passed since the Jan. 6 insurrection. What have we learned? 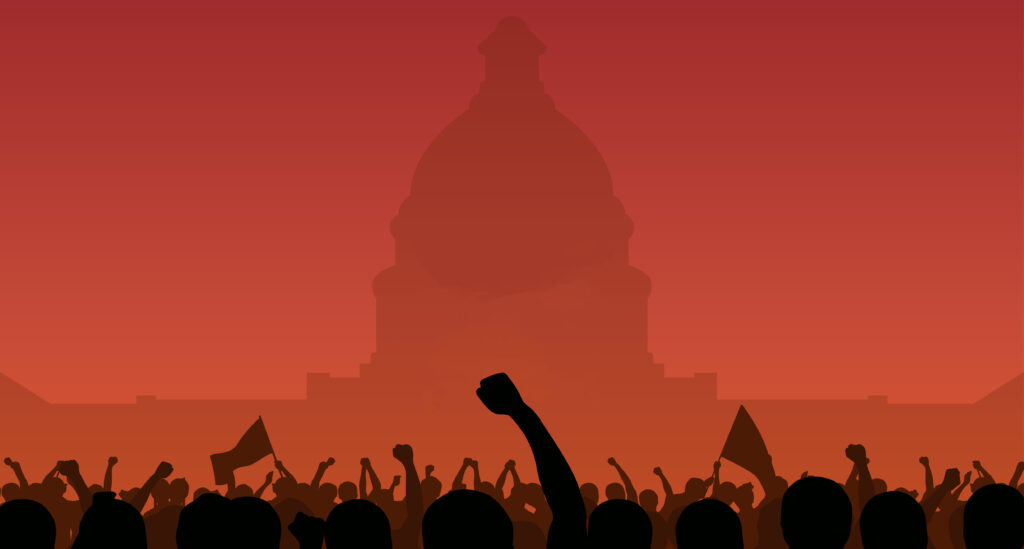 On that day, thousands of people attended a political rally billed as “Stop the Steal” in Washington, D.C., where numerous speakers stood before a crowd clad largely in Trump attire and waving Gadsden Flags, Confederate Battle Flags and Trump 2020 flags, among others, and urged it to “stand up” and “fight” against a “stolen election.”

Then-President Donald Trump took the stage last, telling his followers, “We’re going to walk down Pennsylvania Avenue … and we’re going to the Capitol,” in an effort to deter the procedural ballot certification process and somehow nullify the results of the 2020 election, which he lost to President Joe Biden.

What followed was one of the darkest days in American history, when democracy itself was under attack. Barricades were toppled, windows smashed, congressional offices trashed and looted. Police officers were beaten with hockey sticks, metal poles, baseball bats, fire extinguishers and even flags of our very nation. These officers were punched, kicked, mauled and spat upon. They were blasted with bear spray, crushed between doors, cursed at, called racial slurs and dragged from their positions defending the Capitol, beaten and stomped by Trump supporters who couldn’t stomach losing an election.

Lives were lost and a nation held its breath and watched in horror as the scenes unfolded across media platforms large and small.

A year later, many questions remain about the attack. Many of these questions are on the lips of Americans around our country, wondering why so many so-called “law-and-order” Republican lawmakers and pundits continue to downplay, obfuscate and outright smirk about what really happened that day.

Some claimed it was Antifa that really stormed the Capitol. Others, most noticeably Tucker Carlson at Fox News, claimed that it was set up by Democrats — that it was a “false flag” operation because the Capitol police were “unprepared” for the magnitude of the riot.

Yet, some of these same Fox News personalities sent urgent text messages to Trump during his 187 minutes of silence during the riots — messages they apparently forgot all about while promoting conspiracy theories and outright bullshit to downplay the attack in the hours, weeks and months since it occurred. Prior to a unanimous vote to refer former Trump Chief of Staff Mark Meadows for contempt of Congress charges, a series of text messages were read to the House select committee investigating the insurrection. All of these messages were sent to Meadows during the riot:

Laura Ingraham (Fox News): “Mark, the president needs to tell people in the Capitol to go home. This is hurting all of us. He is destroying his legacy.”

Brian Kilmeade (Fox News): “Please, get him on TV. Destroying everything you have accomplished.”

Sean Hannity (Fox News): “Can he make a statement? Ask people to leave the Capitol.”

Even Trump’s son, Donald Trump Jr., texted to Meadows, “He’s got to condemn this shit ASAP. The Capitol Police tweet is not enough.”

Other texts from unknown Republican members of Congress and others painted a clear picture of frustration growing into desperation as rioters continued to smash their way deeper inside the Capitol:

“Hey, Mark, protestors are literally storming the Capitol. Breaking windows on doors. Rushing in. Is Trump going to say anything?”

“We are under siege here at the Capitol.”

“They have breached the Capitol.”

“TELL THEM TO GO HOME”

“We are all helpless.”

They go on and on, these pleas for help from people who later would compare the insurrection to a “normal tourist visit,” in their attempts to keep convincing their most ardent supporters that an election was stolen. For the record — and for the umpteenth time — there has been no evidence whatsoever of widespread voter fraud that supports any claims that the 2020 election was fraudulent. Quite the contrary, in fact.

As we learn more and more from the House select committee investigating Jan. 6, the actions of that day in 2021 are immortalized not only in texts, photos or video footage, but in our minds and hearts as we collectively stood at the brink and almost fell off.

They say, “Never forget,” when referring to hallowed dates of our past: Dec. 7, 1941, when 2,403 Americans died in a surprise attack at Pearl Harbor by the Empire of Japan; Nov. 22, 1963, when President John F. Kennedy was assassinated in Dallas; and Sept. 11, 2001, when 2,977 people were killed as terrorists flew jetliners into the World Trade Center towers, the Pentagon and a field in Pennsylvania — the latter plane likely bound for the very same building where almost 20 years later a mob of rioters stormed the Capitol and left a stain on this country that will be visible for many years to come.

“Never forget” means all of it: the good, the bad, the ugly. All of it. It means loving our country not for its factions or parties, but for its ideals, its hopes and, yes, its failures, too. We’re supposed to learn from failure, not lean into it.

Loving our country means believing in our people — a collection of immigrants from around the world, a heterogeneous mix of beliefs, cultures, attitudes and persuasions attempting to live in balance with the rest. That is the America most of us truly believe in, when you take away all the noise and bluster. “Life, liberty and the pursuit of happiness.”

When times get tough and angry voices seem to take all the oxygen from the room, never forget to ask yourself a simple question: Is this America?