So-called “yarn bombing” is usually done in secret. One day, a fence or signpost is just what it appears to be; the next, after a night-time visit from ninja-like knitters, it might be covered with colorful swatches of yarn, transforming an everyday street feature into an impromptu piece of public art. By nature, yarn-bombers remain incognito, but that’s decidedly not what happened when a local knitting group adorned a pair of trees in the park bounded by Boyer Avenue and Cedar Street in the evening hours of Feb. 10. 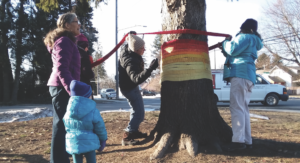 Though passersby saw the multi-colored bands of yarn wrapped around the trees on the morning of Feb. 11, by around noon, news spread on Facebook that someone — or, according to a few reported eyewitness, a pair of adults — had cut or snipped apart the installation, taking away the bands of yarn and leaving behind tiny bits of colorful fluff scattered around the base of the trees.

Over the course of the day, local social media comment threads exploded — many people decrying what they called “vandalism,” while others criticized the knitting group responsible for picking colors that, to them, evoked a pro-LGBTQ political message. For the knitters, several of them dropping their anonymity to respond to allegations that their artwork was in any way political, the yarn bombing was simply their way of adding some color to an otherwise gray February day.

“Rainbows have nothing to do with sexual orientation,” knitting group member Trisha Miller wrote Feb. 11 on Facebook. “They occur naturally after rainstorms and bring smiles when people see them.”

Amid the ferocious online back-and-forth, the city of Sandpoint — which had approved the art installation for display until June — announced that the strips of yarn had been returned and would be reinstalled. According to Miller, Sandpoint police received the yarn, which had “obviously been in a Dumpster, because it was stinky and nasty.”

The identity, or identities, of those responsible for destroying the original installation remains unknown, along with their motives for doing so.

Regardless, a week later, the knitters returned on the frigid, sunny morning of Feb. 19 to again wrap the trees in bands of color — this time separated into warm and cool colors, and stitched with black thread where they’d been previously cut.

“It’s kind of our way of saying, ‘This rainbow will survive,’” Miller said, standing atop a ladder to install a band of deep blue yarn. She reiterated that the installation is intended as a reminder that spring is on the way — even if it didn’t feel like it in the 20-degree shade.

“This hopefully will accomplish that without triggering anybody,” she added, noting that the colors had been rearranged into blues, purples and greens on one tree and reds, yellows and oranges on the other.

The knitting group has been together for about six years, working on projects that they then bring to occasional meet-ups. Last year, they installed a yarn bomb on the chain link fence along the bike path that runs beneath the Sand Creek Byway. That site wasn’t available this year, as Burlington Northern-Santa Fe continues with work in preparation for a second rail bridge.

The knitters started working on what would become the Cedar and Boyer installation in August — about six months of work that took 30 minutes to install the first time, and substantially less the second. Also unlike the first time, this yarn bombing went up in the sunshine with scores of motorists honking their approval and rolling down their windows to shout encouragement as they passed by.

“I’m excited to see it in the light,” said fellow knitter Vicki Reich. “None of us got to see it during the day last time. … Let’s cross our fingers that it stays up until June.”

Miller said that even with all the online furor, “the positive comments outweighed the negative,” and took a philosophical view of the purpose of the public art project — to get people talking.

“It was an unexpectedly successful yarn bombing,” she said.

Knitting group member Susan Harbuck chimed in: “Look for what we do next year.”