Nothing says Bonner County Thanksgiving quite like bundling up and hitting the lake at sunrise in hopes of encountering the fish of a lifetime. The Lake Pend Oreille Idaho Club is keeping the tradition alive with its annual Thanksgiving Derby, when anglers of all ages will compete to catch the biggest and baddest rainbow trout and mackinaw the blue depths have to offer. 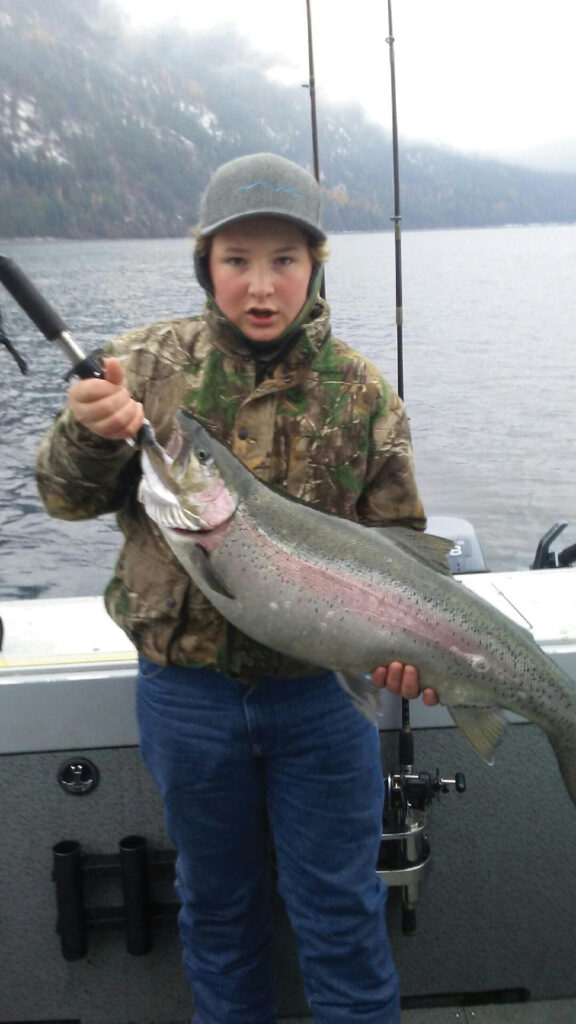 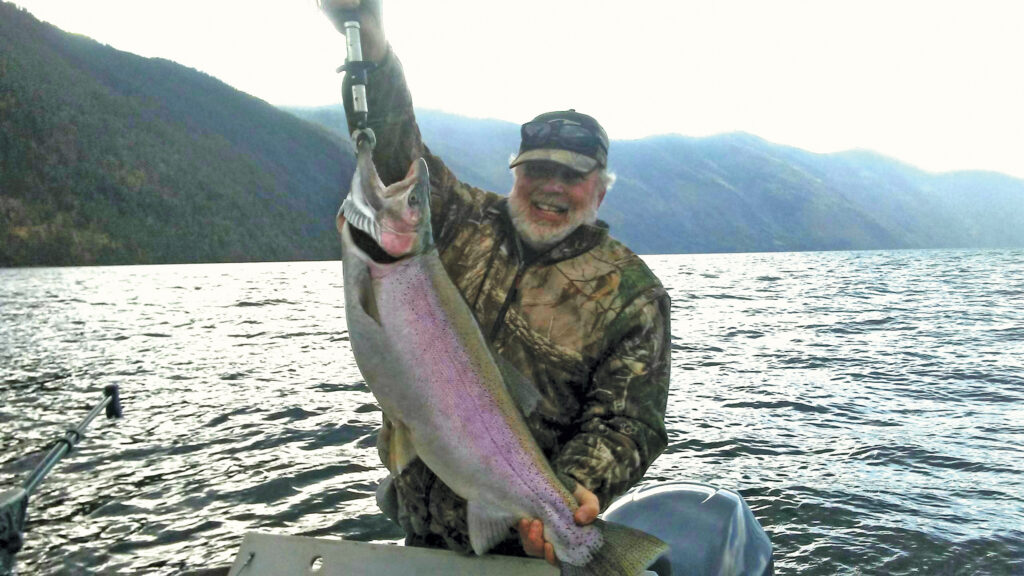 Wayne Heather, bottom, and grandson Blake Heather, top, in 2017. Blake went on to win the derby in 2019 as an adult member. Wayne, a longtime LPOIC member, has served on the board and rarely misses a derby. Courtesy photos.

The Thanksgiving Derby boasts three divisions: adult, junior (ages 14-17) and youth (13 years old and younger). The adult entry fee is $50, the Junior Division is $10 and youths compete for free, though pre-registration is still required. Prizes range depending upon the division and fish in question. A winning rainbow trout in the Adult Division could earn the victorious angler $2,000, as well as a $500 catch-and-release bonus, should the trout be released back into the lake.

LPOIC Treasurer Will Crook said the catch-and-release bonus was recently introduced as an incentive when LPOIC members expressed an interest in promoting more releases and less killing of rainbow trout. With the help of a mesh underwater bag device, fish can be kept viable even throughout the weighing process.

“They swim away happily to keep eating kokanee and growing fatter and fatter to hopefully break a state record one day,” Crook said.

However, Crook said that the club is absolutely unopposed to an angler choosing to take his prized catch home to mount — the bonus is simply an incentive used to keep more rainbows in the lake when possible.

The Thanksgiving Derby mandates a minimum length for rainbow trout: 32 inches in the Adult Division, 28 inches for juniors. There is no minimum rainbow length for the Youth Division or for mackinaw in any division. Seeing as mackinaw — or lake trout — are invasive species, LPOIC encourages the catch and kill of those trout in any size.

The club is active in educating anglers and helping to manage Lake Pend Oreille’s fishery. Idaho Fish and Game Regional Fishery Manager Andy Dux told Sandpoint Magazine in 2019 that the club has a good working relationship with IDFG.

“The LPOIC brings anglers together who value the fishing opportunity that Lake Pend Oreille offers, particularly for trophy rainbow trout,” he said. “As a result, the LPOIC has played an important role in promoting this fishery.”

Aside from advocating for the lake’s dynamic and unique fishery, Crook said LPOIC hopes to “get the kiddos out fishing” by placing incentives on youth involvement in derbies. For the Thanksgiving Derby, kids 13 and younger are free to enter, and captains of boats that host winning youth anglers earn a $50 captain’s bonus for getting the child involved in the sport.

Official LPOIC Thanksgiving Derby weigh stations will be located at Holiday Shores in Hope, the Captn’s Table in Garfield Bay and MacDonald’s Hudson Bay Resort in Bayview. All three locations will be open 8 a.m.-4:30 p.m. daily, and only the Garfield Bay station will offer evening weigh-ins.

As a precaution during the ongoing COVID-19 pandemic, Crook said LPOIC will not be hosting an awards ceremony at the conclusion of the derby, and will instead be mailing all prize money and trophies to the winning anglers.

Find complete information about ticket outlets and prizes by visiting lpoic.org, or find the Lake Pend Oreille Idaho Club on Facebook at facebook.com/lpoic. Updates will be posted on the LPOIC Facebook page during each day of the derby.