Our resident Cab Columnist tells of his recent trip to Africa

If you have ever found yourself thinking that you might seriously be dying of dysentery while being tossed around down the road as you pass by hundreds of horned mammals and unfamiliar natives, you are either traveling the Oregon Trail in a wagon or traversing through Africa in a taxi van. The latter is true for me, and let me tell you, it felt a lot like the Oregon Trail—luckily with less water crossing.

If you noticed a hiatus in my Reader articles of late, it was because I was in fact in Ethiopia. While there, I enjoyed the privilege of helping the nonprofit Uraydis Village establish permaculture for orphanages. On the side, however, I was researching the way cabbies in Africa drive so that I might better serve our dear community. And let me tell you: If you can drive in Africa, you can drive anywhere. 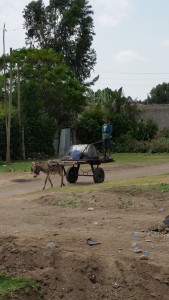 This is because driving in Africa is dangerous. The ability required to skirt the infinite danger variables is some next level water buffalo shiz to say the least. These taxi drivers make any left-turning NASCAR star look like pimply 12-year-old in a go-kart.

If you recall back my previous article about hitting animals on the road, well, it’s sort of like that times a million. Not only do you have to worry about the wild animals such as the Ibex and hyenas darting into your path—you’re also on the lookout for children and their farm animals. Kids seem to constantly be on the side of the roadway herding their livestock in mixed herds of goats, sheep, donkeys and cows. These animals often escape the tiny stick-wielding 4-year-old put in charge of ushering them along the highway (this forever changed the way I hear that Kid Rock song, “So you want to be a cowboy baby?” These really are cowboy babies) and go careening into traffic, causing taxi drivers to swerve into other taxi drivers. On another occasion, a man carrying water got pushed by a fugitive cow into traffic with similar results. All of this happens constantly as drivers zoom down the road at 80 kph, creating minute-by-minute almost-near-death experiences.

If it seems chaotic, that’s because it is. But slowly, I picked up on a system that allows the drivers to navigate the chaos. When encountering a goat, child, chicken, dog, hyena or any other or all of the above, the driver in front puts on his flashers to alert the driver behind that he slowing. They also flash any drivers coming at them with their brights, blinding them in the process. The oncoming driver turns on his wipers to show he has been effectively blinded and is aware of the danger, then he blinds you back with brights and everybody honks like mad. All of this allows these driving wizards to narrowly escape multiple deaths and injuries through last second instinct and decision-making while scattering everything out of the road. It did not seem to be that effective, however, since most of the vehicles looked damaged and many people appeared maimed.

For me, this made it very difficult to sleep at all due to stress most of the trip, and every time I would start to doze, I’d awake in a panic from a horn blast just in time to get blinded by bights and catch some wiper movement and the ass-end of an animal or human scurrying away. If it wasn’t that, it was the occasional cabbage being thrown at my window accompanied by loud yelling. 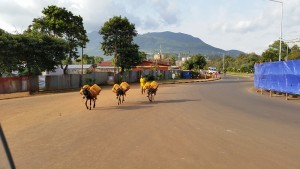 It took me a while to discern why I was getting pelted with cabbages and berated with insults I could not understand. At first I thought they figured I was in dire need of food due to my skinny nature and pale sickly skin. Eventually I learned it was because of the Ethiopian taxi system itself.

There are four types of taxis in Ethiopia. The first are tiny, three-wheeled go-karts with cages that can haul three to nine people depending on how you stack them. They’re typically blue, remain near the city limits and don’t often venture onto the highways between villages.

Next are the old ‘60s Peugeot sedans that seat three to 15 people depending on size and stack ability, which cover a wider range than the three-wheeled counterparts.

The third variety are motorcycles that I once saw carry four people. Another time, I saw one with one passenger carrying two 20-foot steal poles protruding on either side.

Finally, there are vans that specialize in running people from the nearby villages to get clean water and supplies. These vans are hold between six and 30 people—the limit has never been verified, but I saw an amazing amount of people pile out of one with live goats on top to boot. This is the type of van we rented and the reason for the hateful words and cabbage throwing.

You see, it doesn’t go over well when people desperately want a ride at the end of a long day lugging water and see what appears to be a nearly empty van of eight cruise past them without stopping. This became exceedingly stressful when the van slowed in villages and would be rushed by people shouting, “You, you, you!” or, “Money, money, money!” The driver expertly showed me this is handled by furious honking and a refusal to stop. All in all, it was not so different than my taxi at home, except people are wanting to give me money, the “yous” are replaced with “taxi!” and we really only fit six people.

Taking time off had me worried that I might lose my edge upon my return and be ill-prepared for the Festival season. I couldn’t have been more wrong. The last two Festival weekends, I found that I was able to apply the skills I gained from my Ethiopian friends and drive like I never have before. I weaved through foreign Canadians lugging water who screaming and rushing towards me outside the Festival gates. I blasted my horn, threw on my flashers and switched on the brights, dodging dogs the whole time. If I could have stacked ‘em 30-high with the old goats on top, I would have, but I just don’t know how to charge for that. And you can bet come St. Patrick’s Day, I’ll be expecting a few thrown cabbages.

This article was written in a satirical nature, but if anyone would truly like to know more about the work that Uraydis Village does for orphanages, please visit them at www.uryadisvillage.org and support the cause any way you can. Thank you.