New lice removal business to open in Ponderay this weekend

For most people, the thought of a head lice infestation triggers anxiety, dread and an itching sensation. The thought of tiny insects laying eggs and sucking blood from your scalp is undoubtedly less than pleasant, and the thought of treating such an infestation sounds timely, unsanitary and overall, a huge pain. 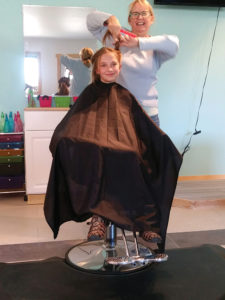 For Sandpoint woman Ellen Schreiber, a head lice infestation means a chance to help other people.

Schreiber will open her new business, called the Panhandle Lice Clinic, on Sunday. After a camping trip with her grandchildren three years ago, on which several of them got lice with no clear cure, she said she did some research and found herself immersed in the training required to be a professional louse remover.

She said that Sandpoint isn’t any more lice-infested than any other community, so she chose the area because her children and grandchildren are here.

But what made Schreiber the perfect fit for such a creepy-crawly job?

She said that over-the-counter treatments — often mild forms of pesticides — aren’t as effective as they used to be because lice have developed an immunity.

“Now they’re using stronger pesticides, so if you care anything about your child’s head, you’ll do natural remedies,” she said. “What we did years ago simply isn’t working today.”

Schreiber said she uses the “Shepard Method,” in which she uses only a comb, enzyme-based shampoo and mint spray. She said it’s a “labor-intensive technique that utilizes a strand-by-strand nit and louse removal. It ensures that every hair has been examined and all lice evidence has been removed. This allows each individual to be treated one time and to be monitored after that.” She said each treatment is followed by two free head checks in which she makes sure she did a thorough job with the original combing.

On top of the combing treatment, Schreiber said the Panhandle Lice Clinic will sell products that can help the child’s parent take out the lice on their own.

“There’s a lot of anxiety with lice, so if you send (parents) home with product then that will ease their anxiety,” she said.

While lice are not welcome guests in anyone’s hair, Schreiber said it’s important to realize that there are a lot of myths surrounding the pests that make lice infestations sound more impossible to terminate than they actually are. For instance, she said some people believe they must immediately wash all of the child’s clothes and bedding if they discover lice. Rather, she said lice without a living host will die after 24 hours, so there’s no real need to worry about the ones that aren’t in the child’s hair.

“Instead of doing all that laundry, just leave the house,” she said.

While Schreiber said she’s excited to provide her removal services, another huge component to the Panhandle Lice Clinic is to help people get past the dread that comes with a lice infestation. She said she wants to give them the tools to tackle the situation in a swift and informed way.

“One of my main objectives with opening this (business) is education,” she said. “I want parents not to be frustrated about this, or have that anxiety.”

The Panhandle Lice Clinic, located behind The Brim coffee stand on Kootenai Cutoff Road in Ponderay, will have a grand opening on Sunday, Oct. 15, from 1-4 p.m. There will be a bouncy house, hot chocolate and coffee, as well as a local food vendor. Schreiber said she hopes to use the open house as a means to educate people about lice, lice removal and everything Panhandle Lice Clinic will provide.

“I’m not trying to make a full-time living out of this, but I am here to help people through it,” she said.