By a wide margin, Idaho voters approved Medicaid expansion through ballot measure Proposition 2 to cover the health care needs for thousands of residents.

When its 2019 session begins next month, it’ll be up to the Idaho Legislature to implement it. And Medicaid expansion advocates are urging lawmakers not to amend the vision of the people when the legislative process begins. 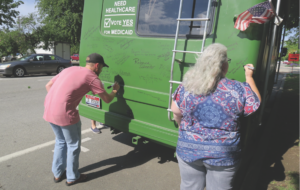 “Creating barriers to coverage will increase administrative costs while decreasing access to care for the Idahoans who need it the most. Implementing unmodified Medicaid expansion is the only way to realize the full benefits of the program,” said Lauren Necochea, director of Idaho Voices for Children.

Close the Gap, an Idaho organization advocating for Medicaid expansion, warns that states that have thrown up legislative roadblocks to implementation have suffered economic costs because of it. To back their argument, they point to Ohio, which will spend $380 million over five years on administrative sideboards at the county level, and Kentucky, which will spend $374 million over two years because of coverage barriers. Both Arkansas and Kentucky are fighting lawsuits over legislative attempts to implement work requirements, Close the Gap officials added.

While more than 60 percent of Idaho voters passed Medicaid expansion in the Nov. 6 election, supporters have worried from the beginning that the state government might impose barriers to effective implementation.

At a recent town-hall event, governor-elect Brad Little said his administration will work the 10-percent cost match for the program into his budget recommendation, Boise State Public Radio reports. But he couldn’t commit to a six-month window for implementation. His reason: The federal government will need to sign off on Idaho’s application, and that could take longer if state legislators mandate additional requirements.

“If we want to do anything different than those other states, that means we’ll have to spend a lot of time cajoling our federal partners, and then we have to have the money in place at that time to pick up the match,” Little said.

If all goes according to plan, state officials expect that Medicaid expansion will be in place by the beginning of 2020.