Bonner County Commissioners unanimously approved a letter to the Environmental Protection Agency (EPA) voicing the board’s opposition to the Kalispel Tribe of Indians’ request for a Class 1 Airshed designation Tuesday. 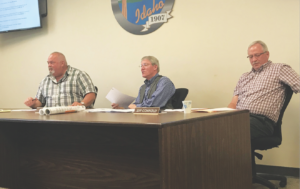 The BOCC’s issue with the Tribe’s application is rooted partially in the actual prospect of designation, but mostly based on the fact that the Tribe did not consult with Bonner County officials prior to submitting their application, the BOCC said.

“(N)one of the Board of County Commissioners … was ever contacted regarding this application. Considering no contact was made, this means that none of the potential impacts to Bonner County were considered nor our concerns were addressed,” Commissioner Glen Bailey read from the letter Tuesday.

The letter highlighted a portion of the Tribe’s application which said the forest product industry is declining, the BOCC pointing out that the forest products industry — among other manufacturing industries — are actually on the rise in Idaho.

“Any new environmental restrictions would be detrimental to future industrial growth in Bonner County,” the letter reads.

Commissioner Jeff Connolly said he’s looked over the Tribe’s application in detail and has found “some real holes.” Connolly said he reached out to Tribe officials to see why Bonner County was not included in discussions prior to submitting the application to the EPA, and asked them to explain their reasoning to the commissioners. According to Connolly, Tribe officials chose not to explain.

“I don’t know how this document can be complete because it doesn’t address any of the counties in Idaho that could be affected,” Connolly said.

“The two are very integrated and combined — you can’t really have one without the other. If there was no proposed smelter or purchase of land by a Canadian corporation, they wouldn’t be asking for (a Class 1 Airshed designation),” said Bonner County resident Elizabeth Iha.

Chairman of Citizens Against the Newport Silicon Smelter Michael Naylor publicly requested during Tuesday’s meeting that Commissioner Dan McDonald recuse himself from the discussion due to recorded comments made in November 2017 which Naylor said were directed at the Kalispel Tribe and were “racist.” McDonald, who said in October that the comments in the recording were “dramatically edited,” did not recuse himself.