The Straight Poop: The quest for dog-friendly businesses in North Idaho

Where am I taking my humans today? It’s 10 a.m. on a rainy, windy, cold morning. Time to warm up the belly! 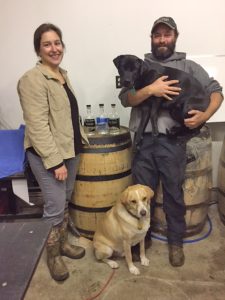 •It’s the only one if its kind in Sandpoint.
•The barn cat’s name is Leonardo de Cattio.
•The shop dog is Pepper—soon to be the namesake of a new product.
•No cat hair will ever be found in this product.
•The “Master” has been planning this product for years.
•The couple, who both grew up in Sandpoint, found 1,000 empty bottles of Karo syrup on their property.
•One of the products is named after the trail head to Harrison Lake.
•The owner is a Sasquatch fan.

The Mister, Missus and I are sniffing out the only artisan distillery in the area, just past Dover, on Hwy. 2. Master distiller Victor Vachon and wife Jesse welcomed us to MillTown Distillery this morning, as it’s never too early to lap up some samples!

The grass roots MillTown story dates back many years. MillTown got its name from brothers that worked in the local mill and supplied moonshine to the area.

Victor was interested in distilling at a young age. His passion was diverted when he became a police officer and a military contractor. He returned to Sandpoint in 2007 and focused on MillTown during his off hours. However, he paid the bills working for a local logging company. He took classes and personally crafted all of the necessary equipment needed to grow and grind the grain, build the still, the tanks, the bottling machine, and sourcing only USA bottles, corks and shrink wrap.

Victor and Jesse secured a vendor to print the bottles in Sandpoint. Jesse’s graphic design background enables her to craft the awesome label art that showcases the product and the area they love.

Hot diggity dog for MillTown! Here’s what sets them apart from other artisan operations:

•They grow organic grain on their own farm, reclaiming their overgrown fields.

•No chemicals are used in farming.

•All ingredients are sourced locally

•MillTown taps into the same crystal spring water that the moonshiners of yore used.

•Victor touches every step of the production, thus ensuring attention to detail and outstanding quality control.

Mill Town 217 Cork Whiskey, Pend Orielle River Light Rum and Wild Man 217 (120 proof) can be found in all Idaho State Liquor stores and select Sandpoint establishments. A big four paws up, as MillTown, in its second year of production, is soon to be offered at the new Eureka restaurant in Boise.

Wait for it… wait… wait… (Pepper and I are playing in the fields).

Gin (which could be named after Pepper), is in gestation. A vision of Pepper hosting a friendly onsite farm tasting facility is dancing in Jesse and Victor’s head. Currently by law, they can only host five people, five vehicles and two dogs at once.

Victor daily mantra is: “Whatever it is you need to do, just do it. Don’t be scared of it. Eventually you’ll get good at it—just keep doing it!” Woof! Woof!