The bleachers were full in Newport High School’s gym Wednesday night as representatives from HiTest Sand gave a presentation and took questions regarding the company’s proposed Newport silicon smelter plant. 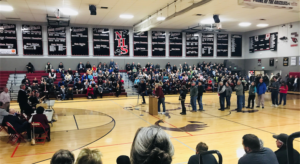 Meeting attendees line up to voice their thoughts on the proposed smelter. Photo by Lyndsie Kiebert.

HiTest representative Tim Thompson said the goal of the gathering was an “exchange of information,” not a night to seek any agreements. He also emphasized that while HiTest has purchased 186 acres south of Newport, they are just starting the permitting process and there are no set-in-stone plans to build the plant just yet.

“I hope we can be respectful of differences of opinion,” he said. “Let’s do this as if we were sitting around a very large table and we are entertaining a very large, dynamic family.”

HiTest President Jayson Tymko explained how the plant would produce silicon through a process that uses only rock, coal and woodchips — no chemicals, he said.

He soon after brought up a list of 150 job opportunities the plant would provide, both general and managerial positions, including projected salaries and required education levels.

“Most of our jobs are for locals,” Tymko said, noting that HiTest will likely bring in 10 to 12 people with experience to lead shifts for the first 18 months of operation.

Tymko reminded attendees that while several expressed concern about the various county commissioners’ stances on the smelter plant, they aren’t the officials who make the ultimate decisions.

“They truly do not have the ability to say ‘yes’ or ‘no,’” he said. “It’s more so at the state and federal level — they are the holders of the permits, and without those permits we cannot proceed.”

Those permits, administered by both the state and federal entities, address air quality, storm water management and much more.

“We wanted people to have as much third-party information to be able to validate what we say,” he said. “We’re not trying to confuse anyone. We’re just trying to present the facts.”

The group was then approached by several audience members with questions and comments, most of which were for HiTest.

Concerns centered largely around air quality, property values and whether the company would seek input from Idaho residents seeing as HiTest’s Newport property borders the state line. The crowd expressed support and disdain for those making public comment with applause and the occasional yell.

Rick Kramer of Sagle asked Tymko why the company would bother hauling quartz, which comes from Canada, all the way to Idaho for processing rather than just keeping the plant north of the border as well. Tymko said no location HiTest looked into in Canada were as ideal as the Newport property, noting again that if people are concerned about environmental impact they should look to HiTest’s decision to set up shop in Washington.

“If we were polluting, Washington is the last state we’d approach,” he said.