Skatepark expansion in the works

For the past 15 years, the King of the Kongcrete skateboarding competition has brought together skaters of Bonner County to share their love of the sport. This year, it will also be a chance for the community to share ideas for the future expansion of the Concrete Lake Skatepark at Travers Park.

King of the Kongcrete will take place Saturday, Sept. 25, with registration from 9-9:45 a.m. and the competition starting at 10 a.m. Competitions include best runs, best tricks and bowl troll. A $25 entry fee will go directly to fund the expansion effort. 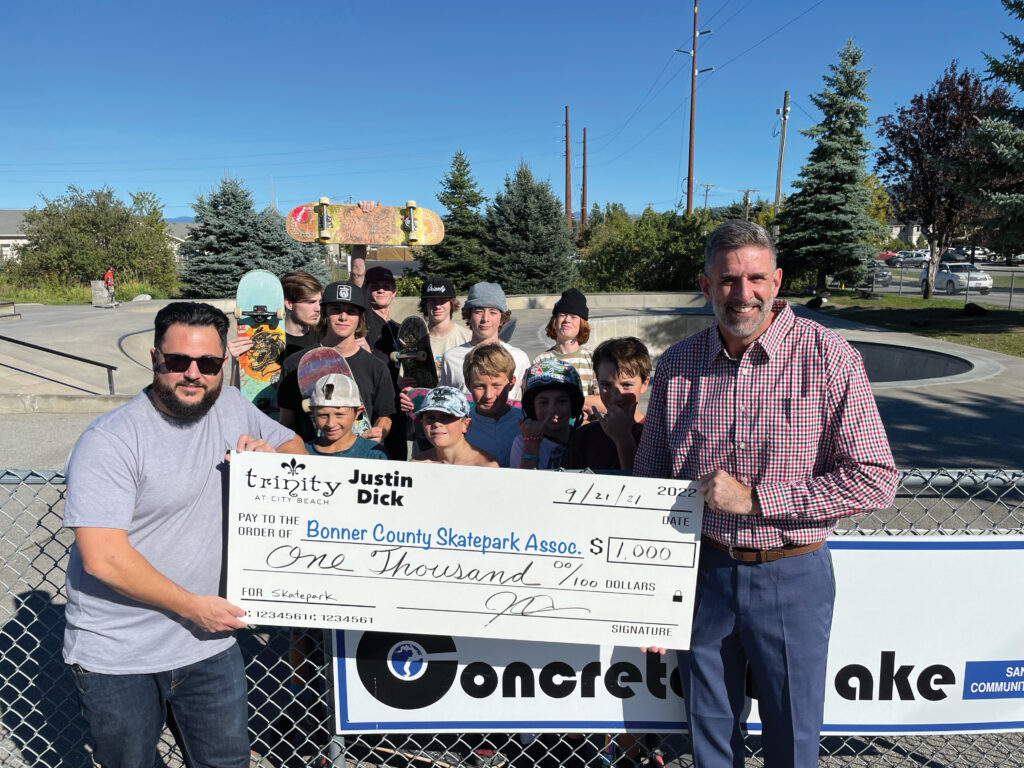 The event has been presented as a cooperation between the city of Sandpoint and 7B Boardshop, excluding last year’s event, which was canceled due to COVID-19. This year, 7B Boardshop is taking the reins from the city, but the two entities will continue to cooperate on an expansion of the skatepark slated for 2022.

“This year, we’ve created the Bonner County Skatepark Association, a 501 (c)3 nonprofit organization with all proceeds from the event going back into the association to raise money for the expansion of a new skatepark at Travers Field,” 7B Boardshop owner Rory Whitney told the Reader.

Whitney said the plan right now is to expand the existing footprint at Travers Park, but the long-term goal is to reachout to the city of Ponderay to get more skateparks in the area.

The expansion of the park is included in the city of Sandpoint’s Parks and Recreation Master Plan, which has allocated $95,000 toward the expansion in the budget.

“We’re going to expand the square footage, add more street-style plaza terrain and smaller transitional features,” Whitney said. “Our goal over the next few weeks is to have a meeting and call every kid who wants to be involved to see what features they want at the park.”

Whitney said his organization has been working closely with Maeve Nevins-Lauter, the newly hired city of Sandpoint parks planning and development manager.

“The very first step in implementing the renovation is to talk with the community,” Nevins-Lauter told the Reader. “I met Rory and his board and we had an initial conversation at the skateshop and learned about the existing history of the facility. The number one takeaway was they really feel they should have some good feedback from the community. They’d like to see the park being not just for skaters but all wheeled users and to be as inclusive with as many of the community members as possible.”

Nevins-Lauter, who was hired from Anchorage, Alaska, where she spent nine years as a senior park planner, has an extensive background with park development and design.

“I helped build the first concrete skateboard park bowl up there, actually,” she said.

Nevins-Lauter said the process will start with a public outreach process to collect feedback on design ideas and features.

“The preferred concept identified moving toward the north [toward the existing tennis courts] where there is an existing parking lot and a grassy median strip,” she said, adding, “The next step is to hear from kids and people who will be at the skateboard event Saturday.

“Then I want to talk to neighbors in the area; because, while it’s intended for skateboarding, there are other users and visitors, such as the senior assisted living home and school across the street. … I’m driven by inclusivity, so it’s great to have all generations participate.”

The plan is to expand the existing footprint of the skatepark to around 18,000 square feet, which could include features incorporated into the skatepark like skateable retaining walls and sculptures that pay homage to the area’s history.

After community feedback is gathered this fall and winter, Nevins-Lauter said the goal is to obtain bids from skatepark design companies, with the goal to break ground on the expansion by Memorial Day 2022.

“I’ll be at the park all day Saturday and will have drawing tools for anybody to tell me what they’d want to see in the skatepark,” she said.

Whitney said the Bonner County Skatepark Association is actively raising funds to help cover the costs of this renovation.

“Justin Dick from Trinity just donated $1,000 to this effort,” Whitney said. “We’re hoping to challenge other businesses in town to match or beat that donation.”

“The skatepark right now is the most used city parks facility in Sandpoint,” Whitney said. “We’ve quickly outgrown it in the last 16 years we’ve had it. It’s very important for youth to have a place to express themselves. A lot of kids can’t afford to go out on the boat and wakeboard or can’t afford a season pass [to Schweitzer].”

Whitney plans to hold a raffle at the King of the Kongcrete event Sept. 25 and encourages anyone interested in watching local skaters compete or speak with Nevins-Lauter to head down to Travers Park to learn more — and share ideas — about the project.