Movie musicals are tricky. At their best, they weave a story around infectious melodies that leave viewers still humming long after the movie has ended. At their worst, they make you cringe every time a new song flops onto the script.

The past decade has seen a reinvigoration of the movie musical with an attempt to downplay some of the grandeur and paint a more realistic picture of the fraught relationship some artists have with music.

Think of Jeff Bridges’ tormented character in Crazy Heart. He plays a washed up country artist who has fallen on hard times, pissing in jugs and gigging at bowling alleys while nursing a serious alcohol problem. Or Nick Offerman’s dad character in Hearts Beat Loud. Offerman plays a musician who never really made it. He owns a record store and somewhat accidentally becomes a new indie sensation when releasing a track with his daughter from a practice session. Offerman and bright newcomer Keegan DeWitt actually play their parts live during filming, doing away with the awkward lip synching and fake dubbing of past movie musicals.

In this spirit, the 2016 Irish coming-of-age film Sing Street breathes fresh air into this genre. Set in 1980s Dublin, a 15-year-old boy named Conor grows up in a home reeking of failure. His parents are splitting up, his older brother once had dreams, but now just wanders around the house. Everyone dreams of getting out of Ireland. 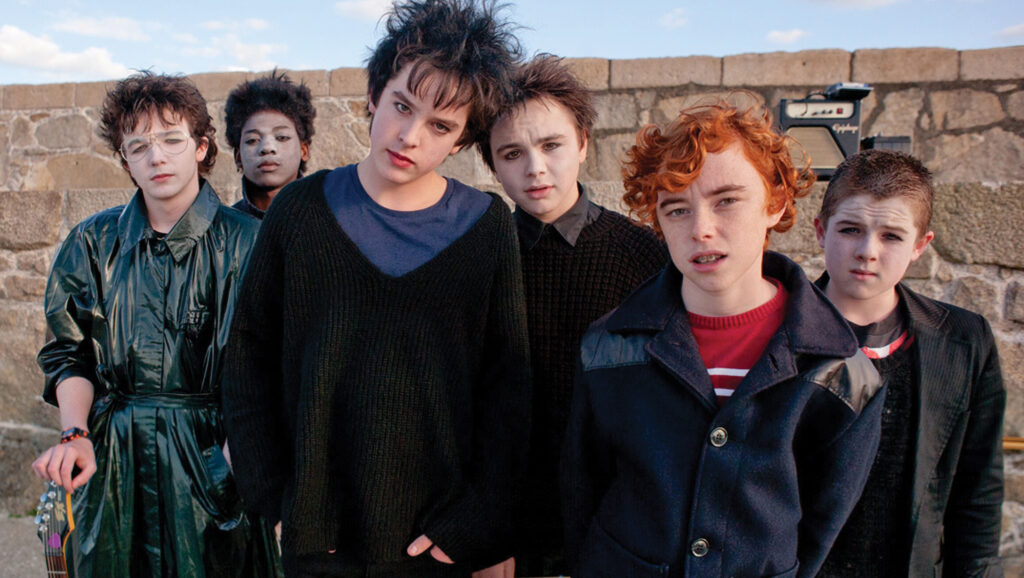 Director John Carney paints the picture of Dublin in the mid-’80s: depressed, hungover from the punk explosion and dabbling in New Wave bands like The Cure, Duran Duran and Depeche Mode — all of whom were releasing videos during the explosive first years of MTV.

Overall, the film pulls no punches. It’s tender, mean and hopeful all at once.

Conor, played by a ruddy-cheeked Ferdia Walsh-Peelo, drowns out his parents’ fighting in the other room by strumming a clunky guitar and mashing together words. It could be the origin story of any famous or failed musician.

Hard times cause Conor’s parents to pull him out of a private Jesuit school and he attends the rough Catholic boys school called Synge Street, where he is bullied by his peers and abused by the headmaster for being different.

Like so many of us did when facing those same awkward times, Conor tries to dream his way out of his mundane reality. He spots a beautiful girl claiming to be a model, played by Lucy Boynton, who has dreams of going to London someday. Smitten with her, Conor lies and says he’s in a band, and they’re looking for a girl to star in their music video.

Driven by his dreams of success — as well as the age-old desire to get laid — Conor scrapes together a rag-tag band of weirdos and ne’er-do-wells and they set about a fascinating exploration of imitating popular bands’ sounds, and finally writing their own music.

They eventually land a gig to play at a school dance, but Conor arranges a shoot for a music video beforehand. This scene, as the band sets up at the gymnasium, particularly shows the discord between an artists’ mind and reality. In his mind’s eye, Conor’s music video is well-produced, well-lit, filled with dynamic costumes and extras. His parents are there, beaming with smiles. His older brother fights off a brute with a knife, which turns into a synchronized dance. Cut back to reality and it’s just a dingy Irish Catholic school with a half dozen denim-clad pre-teens swaying awkwardly like animated ’80s corpses.

That’s how it is when you dream. Everything has a golden hue, a beautiful purpose, a resolution. Everything hits on the beat and the dream is attainable. But the real world is filled with confusion, misunderstanding, bad habits and ruts into which our lives have drifted. The promise of art, the creative drive, is sometimes the only thing that makes sense out of this disjointed world. Sing Street does an excellent job capturing that “happy-sad” nature to creating art, especially music.

It also shows that the muse — in this case a beautiful girl living at a public home with a bipolar mother and dead father — is beautiful inside the art, but just as messed up and lost as the rest of us.

That’s the magic of art; it gives anyone a chance. The degenerate, the pious, the flawed and the damned — if you wrap it in something beautiful, we all have a chance to share in that emotional release.

The film’s original music, written by Gary Clark and John Carney, is a character of its own. Like the best music movies, it carries the emotional weight of the characters’ struggles and releases a yawp of triumph at just the right time. It’s enthusiastic and youthful, a worthy homage to the New Wave period.

There’s a good reason why Sing Street earned a 95% on Rotten Tomatoes; it’s different from the rest, cheesy enough to melt your heart but gritty in all the right places. Stream it free at tubitv.com.