A documentary about the world of blind sailing

Sometimes a documentary film comes along and reminds us how resilient and powerful human beings really are. The upcoming documentary “Sense the Wind” playing Friday, July 7 at 7 p.m. at the Panida Theater is certainly one of those films.

Six years in the making, “Sense the Wind” follows the journey of four blind sailors as they train and compete in national and international regattas. New York-based producer and director Christine Knowlton has seen her film praised as it makes its way to various film festivals around the world, even winning a Humanitarian Award at the Socially Relevant Film Festival NY.

We talked with Knowlton on the phone about the six years of her life it took to put this film together, the amazing athletes she met along the way and the romance of bringing a story to life on film. 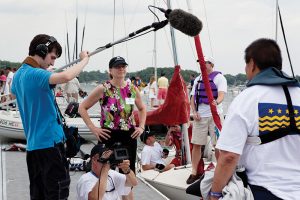 SPR: Thanks for talking with us, Christine. Tell me how you got started on this subject matter.

Christine Knowlton: It goes straight back to Betsy Allison. I’d heard her present at a collegiate women’s nationals at Newport. She presented a slideshow of adaptive sailing and mentioned blind sailing. Betsy, at the time, was the U.S. women’s coach in the Olympics. Then she started doing paraolympics. She’s internationally known. She’s won medals in women’s laser competition. She’s tirelessly a proponent of inclusive sailing and adaptive. It doesn’t have to be racing and get people out and let them try it. That’s her mission.

SPR: I’m not familiar with the blind sailing community.

CK: Blind sailing is a niche sport. Around it is the adaptive sailing world. That’s for physically disabled sailors, not just blind. I didn’t know this before. Paralympic sailing is physically disabled. You don’t have a blind person as a skipper. In blind sailing, you have to have a blind skipper. … In fleet racing in a team of four, the skipper is blind and a sighted tactician is alongside, but they cannot touch anything. They communicate with each other and develop a system by themselves. A blind crew handles the mainsail, the jib. What’s important is that actual blind sailors are controlling the boat.

SPR: How do they navigate?

CK: They have big inflatable marks like any other regatta, and they make noise. It’s all verbal communication and feeling the wind, as well as using their skills and sense. Echolocation is a part of it. One sailor said he can tell the tide is changing because of the sound of the water on the hull. Most sailors use their butt to feel what’s going on. A French sailor used a feather in his cap. They use tape in the sheet to mark places where they might grab. Blind sailors often sit aft [backwards] when they are going upwind. It sure scares the hell out of sighted sailors who think they don’t know where they’re going. Really it’s just about sensing the wind and talking to each other.

SPR: You focused on four blind sailors – Nancy, Inky, Philip and Matt – in “Sense the Wind.” How did you end up meeting them?

CK: I met the cream of the crop in the blindness community and sailing community. Some of these guys are top notch sailors. Smart, adventurous people with the biggest hearts. It really changed me spending time with them. … Betsy said ‘You’ll have to meet Matt, he’s been in it the longest.’ Matt is a passionate sailor and beats sighted skippers in Newport with his top notch crew. He’s that kind of person — born blind, grew up with high expectations. I knew that Matt was someone I needed to cover. The others I met along the way. I was covering some others, just filming everybody and met another man in Florida, another in France. Nancy invited me to come to one of her doctor’s appointments and stay at her apartment. Now we’re friends. I’ve been a part of her life ever since the film started.

SPR: What was the initial reaction when you started showing the film to the blind community?

CK: When I first showed at Blind Word at Chicago Yacht Club, I showed the described version. Most of the teams were in the room as were their sighted guides. It was so wonderful. The Yacht Club people came up to me and were so moved. The head of the whole event said, “Now I get it.”

SPR: Was there a learning curve in making the film describable for the blind community?

CK: I didn’t know what film description was before this. I didn’t know about subtitles and captions. But the blind sailors were really happy with the video description. That was wonderful to hear. It was vetted, in a way. Everything I’ve done to graphics to websites to menus on the DVD I had an IT person look at from a blind perspective to check for accessibility.

SPR: What did it mean to you to receive the Humanitarian Award at the Socially Relevant Film Festival in New York?

CK: To be presented that award was so wonderful. At the award party, I met a Japanese journalist who wanted to do an article on the film. He interviewed me and gave all sorts of pictures. I mentioned that we would like to bring the film to Japan. Within a couple months, I got a detailed proposal and they bought the film to a yacht club in Tokyo and the Japanese blind sailors were there. They even surprised me and flew out two of the people in the film.

SPR: What were some of the biggest surprises for you in this process?

CK: The blind community is really amazing and most of them have a great sense of humor. I remember hearing conversations about, would they rather be blind, lose legs, or an arm, or be in a wheelchair. It was a very funny conversation. One lost a leg in a car accident, another was hit by a car on a bicycle and was in a chair. These are hardcore sailors and smart people, but they’re fun, too. I heard the blind jokes they were telling after the race was over when they were drinking beers. I said to myself, “Why am I feeling like tiptoeing around questions?” They’re over it. They’ve come out of their dark places and gone through severe depression — they talk about it. They are empowered to push forward and not accept limitations. That’s a message that any age or culture can take away.

Catch “Sense the Wind” at the Panida Theater at 7 p.m. on Friday, July 7. For more information, check out www.sensethewind.com and www.panida.org.