Around 150 people turned out to attend the Scotchman Peaks proposed wilderness informational meeting at the Clark Fork Junior/Senior High School on Wednesday night.

The meeting began with presentations from various organizations to shed light on commonly asked questions regarding the proposed bill introduced by Sen. Jim Risch (R-Idaho) in December. The second half of the meeting was designated for comments and questions from the community. 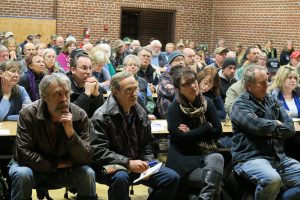 Members of the audience in Clark Fork on Wednesday listen to the Scotchman Peaks wilderness proposal. Photo by Ben Olson.

The proposed wilderness designation will encompass almost 14,000 acres of wilderness in Idaho surrounding Scotchman Peak, Goat Mountain and surrounding environs. Under the potential new designation, there will be no motorized access inside the proposed area including snow machines, snow bikes, ATVs, chainsaws or wheeled game carriers. Road building is also not allowed.

However, as Hough pointed out, these restrictions have largely been in place since the U.S. Forest Service began management of the Scotchmans as a proposed wilderness starting in 1987.

“It’s important to note that there is not going to be a big change [if the wilderness proposal is adopted],” said Hough. “This was a roadless area already. It’s treated as a wilderness already. The main difference is that future generations can’t change it. It will be protected.”

Boeh spoke in support of the proposal in terms of his position at Idaho Forest Group: “From a log supply standpoint, there is only marginal timber land inside the area.”

Boeh said that a current forest plan estimated a total of 900,000 acres of suitable timber base existed within the Idaho Panhandle National Forest, none of which is included in the proposed wilderness area.

“We feel quite comfortable there will not be an adverse impact on Idaho timber,” said Boeh.

Smith pointed out that Sen. Risch’s introduction of the bill was merely a first step in the long process to obtaining wilderness designation.

“When Sen. Risch introduces a bill, he puts it out there for everyone to give feedback on,” he said. “This is not a finished product … He wants you to decide if you like it or not and then go from there.”

Smith said at some point Sen. Risch will re-introduce the bill and there will be another chance for public comment.

Walker’s remarks touched on the timeline of the proposed wilderness area and the multiple public comment periods and meetings that have taken place over its history.

“It is accessible to the disabled only if you are in a motorized wheelchair,” said Danielle Ahrens, the District 1 chair for the Idaho Republican Party. “Someone like me who has sustained a spinal cord injury and cannot walk long distances, we cannot go in and hunt and use a wheeled cart to take my game out … This is another layer of federal control. It’s another federal land grab.”

Jason Frank of Lightning Creek was dismayed at the lack of motorized access to the area.

“I’m an avid snowmobiler,” said Frank. “I grew up riding in that area. Why does one group get to tell me that I can’t ride there?”

Compton pointed out to Frank that riding motorized vehicles is currently prohibited inside the proposed wilderness area, so the proposed bill is “not changing an area that is already closed to motorized use.”

Kris Allen, who claimed to live in the “woods between Sandpoint and Hope” lamented the inability for disabled to access the area.

“It appears the American Disabilities Act is getting short shrift, because you can’t get in there if you’re disabled,” said Allen.

Hough pointed out that the ADA “specifically refers to the Wilderness Act and it directly states that it does not prohibit wheelchair access, including motorized wheelchairs.”

Ten-year-old Ryan Durbin asked if it was permitted to carry a handgun for self defense reasons. The panel assured him that it was not restricted as long as it was a legal weapon.

While the meeting began peacefully, tensions began to run high toward the end. Several citizens loudly voiced their opposition, claiming that the proposed bill was taking land from the state and handing it over to the federal government.

“This area is currently managed by the U.S. Forest Service,” said Hough. “There will be no transfer or change from state to federal land because it has always been designated federal.”

While no additional meetings have been scheduled at press time, Hough said that there will be at least one more meeting taking place in Sandpoint in the near future.