The start of the 2021-’22 school year is just around the corner and city of Sandpoint crews have been preparing to keep kids safe. New signs have been installed in school zones with a reduced speed limit of 15 miles per hour Monday-Friday, 7:30 a.m.-3:30 p.m. In addition, paint has been added on the street to alert drivers.

Sandpoint police will be conducting emphasis patrols during the school year. 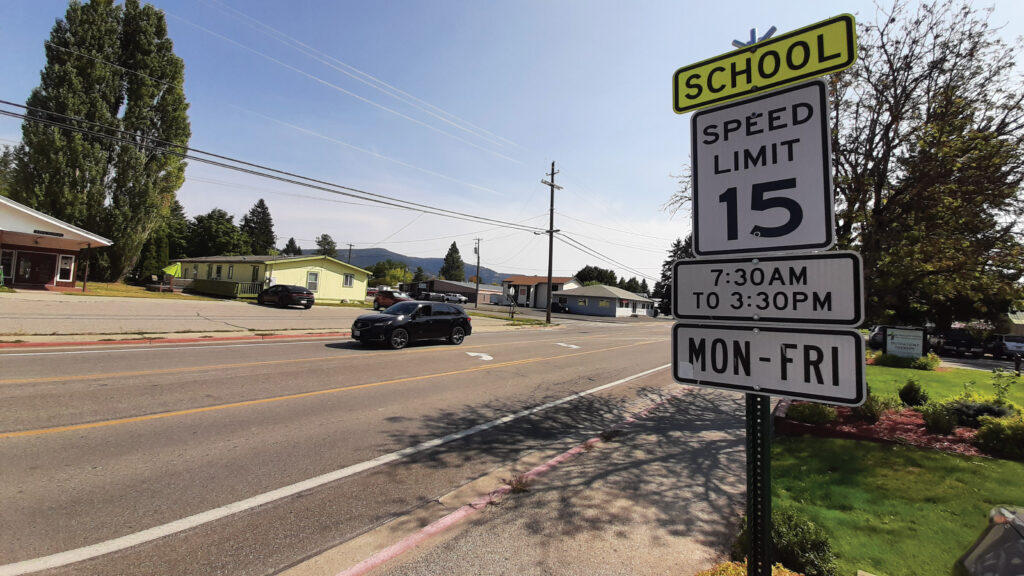 School Zone speed limits were reduced to 15 miles per hour prior to the start of the next school year. Photo by Ben Olson.

The reduced speed limit from 20 mph to 15 mph in school zones was one of the key recommendations that came out of a safety audit of the Division Street corridor, as part of the city’s multimodal transportation plan.

The audit report noted that a 10 mph reduction in speed is the engineering standard for school zones. In future years, the city will also add flashing lights during those times students are most likely to be present.

Current speed limits on the remainder of city streets comply with engineering standards and best practices based on the street classification and volume. In the coming months, city staff will be drafting a policy and procedure for consideration by the Sandpoint City Council that will allow residents to request a speed calming analysis in their neighborhood. The result of the analysis could lead to speed tables or other calming features to increase safety.

Other recent multimodal safety improvements also include a new flashing pedestrian crossing at the intersection of Highway 2 and Westwood Drive, where bicyclists and pedestrians enter or leave the Westwood neighborhood and cross Highway 2 to access the paved trail on the north side of the highway.