A series of widespread robocalls late last week and this week attacked the Sandpoint Reader and its publisher and co-owner, Ben Olson. 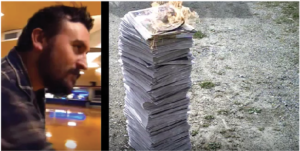 A still frame from a video posted on YouTube with a stack of Sandpoint Readers stolen from area grocery stores and lit on fire. Courtesy YouTube.

The robocalls homed in on Olson’s education and work history managing a bar. They also claimed that Olson threatened a local business owner because of a tenant in one of his properties, an accusation Olson vigorously denied.

“The allegations in the call that I attempted to blackmail a local business owner are completely false,” Olson said. “That is not how the Sandpoint Reader operates, nor how I operate as a human.”

At the beginning of the week, a video sent to Sandpoint Reader advertisers showed a stack of hundreds of the paper’s latest edition being burned. A voice over the images said that if business owners continued to advertise with the paper, they, too, would be attacked in robocalls.

According to Olson, the robocall has had the opposite of its intended effect. Not only did no advertisers cancel contracts with the Reader, but the paper received thousands of dollars in donations and new ad contracts as well. Hundreds also called, emailed or commented on social media to express support.

“The result has been an overwhelming show of moral and financial support to the Reader and the free press in general,” Olson said. “So, to the person behind this, I say thanks for all the free advertising, as well as rallying the community behind the cause of journalism.”