A meeting hosted by the U.S. Forest Service last week about proposed exploratory drilling for silica deposits near Lake Pend Oreille turned into a battle of two perspectives. 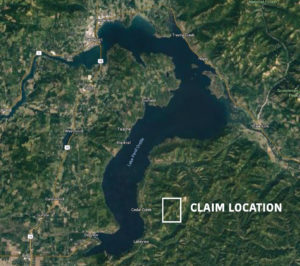 A map of the proposed exploratory drilling. Courtesy Google Maps.

To residents concerned about the proposal, which would drill two holes to a maximum combined depth of 200 feet, it is a possible overture toward a full-scale silica mining operation. They fear an exploration project to determine the purity and quantity of silica reserves is the foot in the door a mining company needs to pursue a proposal.

“This could escalate into a full-blown silica mine that could have meaningful implications,” said Shannon Williamson, executive director of Lake Pend Oreille Waterkeeper.

From the U.S. Forest Service’s point of view, however, the exploratory project is a single proposal that needs to be analyzed and judge on its own impacts. Should a mining project be proposed, that’s a separate issue with its own legal requirements and processes.

“We are in compliance with the laws and rules by which we are required to evaluate this project,” said Sandpoint District Ranger Erick Walker.

According to Williamson, under environmental protection laws, the project should receive an environmental impact statement required of other projects due to the possibility of “significant impact.” Walker disagreed with her interpretation of the law, saying that a full-blown mine is not being considered and that there’s no guarantee exploration will turn up the quality and quantity of silica required to justify one.

Forest service representatives also said there is no evidence of any connection between the exploratory drilling for silica and the proposed silicon smelter in Newport, a synchronicity that has raised many eyebrows. Proposed by Canadian company HiTest Sands, the smelter project has raised significant alarm in both eastern Washington and North Idaho for its potential environmental impacts.

No representatives of Pend Oreille Silica, Inc., the Missoula, Mont., company requesting the exploratory drilling, attended the meeting or advocated for the proposal. It was a fact noted with surprise by Matt Nykiel of Idaho Conservation League.

In a presentation, U.S. Forest Service representatives detailed exactly how the exploratory drilling project would occur if approved. The project would drill two holes about six inches in diameter to a total combined depth of 200 feet. Under these terms, one hole could be shallower, and the other could be deeper. Should the plan be approved, it will likely take place this summer. The job itself will take about two weeks of daylight-hours work only, with a maximum of two eight-hour shifts per day.

Drillers will reach the site, which is not visible from Lake Pend Oreille, via U.S. Forest Service Roads that are normally closed to the public, along with about 800 feet of temporary access. Walker said the operation will occur under Forest Service supervision most of the time.

The drilling itself will likely use a direct-mud rotary process conducted by a truck mounted with a core-drilling rig. Other equipment needed for the job includes a low-boy transporting a rubber-tired back hoe, one water tender and two or three light-duty pick-up trucks. The water required for the operation will be drawn from a privately-owned well permitted by the state of Idaho and transported to the drill site by the water tender.

According to U.S. Forest Service personnel, the proposed work will include several measures to protect the environment and citizens. Forest Road 2238 will be closed by locking entry and exit gates, while a temporary gate closer to the drill site will further discourage accidental access. All equipment will be inspected for non-native invasive species before accessing National Forest System lands. After work is complete, the temporary access road and drill site will undergo full recontour and reclamation, which will include the planting of a native seed mix. Work will abide by the “quality hunt” seasonal closures between Sept. 18 and Nov. 5. Finally, the state’s best management practices will be utilized for erosion and sediment control.