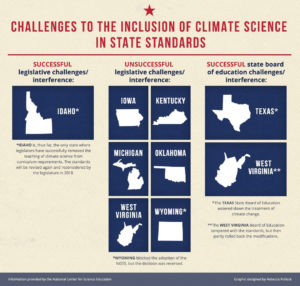 Chart by the Weather Channel using data from the National Center for Science Education. Designed by Rebecca Pollock.

The proposed standards are not a bill, and therefore do not require approval from both the House and Senate. They are considered an administrative rule, meaning only one of the education committees need approve the new standards. For instance, if Senate Education votes to approve the standards in full, including the portions House Education wanted removed, then that would mean the standards would move forward in their full-length form.

Senate Education Chairman Dean Mortimer told Idaho Education News that his committee would not vote on the rule Wednesday evening. He said he “wants to separate the vote from what could be emotional public hearings, giving the vote some time to ‘mature.’”

This is just the latest in an ongoing tug-of-war that began in 2016. The New York Times reported that when Idaho lawmakers removed all mention of human-caused warming from state standards last year, “they faced a swift backlash from teachers, parents and students who said that censoring science would leave students disadvantaged, jobs unfilled and the state unprepared for the future.”

A committee of teachers, parents and scientists, led by director of academics at the Idaho State Department of Education Scott Cook, recently attempted to create new standards lawmakers could support. The group seeks to include climate change in statewide science standards.

The committee reworked the passages that were originally scrubbed by the House, and came up with the standards being reviewed now. The New York Times reported that “the revised standards include natural causes of climate change alongside those driven by humans.”

“Yes, we have teachers, parents and students who hold the same sentiment,” he said.

Woodward said that in the next few years, LPOSD will be looking at their K-12 science curriculum and possibly implementing changes.

“At that time, we will also look at current state standards and determine locally if we want to expand on our standards,” he said.

Sandpoint High School science teacher John Hastings is well aware of the debates happening on the state level, and said he stands by teaching students about climate change.

“There is no ‘stance’ on climate change. There is only the science, which is unequivocal,” he said. “It’s like asking, ‘what’s your stance on gravity?’”

“Another misunderstanding people have is that the legislature is saying we can’t teach climate change,” he said. “We can and will continue to do so.”

Hastings said if lawmakers successfully eliminate human-caused warming from the standards, state tests will not include questions regarding that topic. However, students who take Advanced Placement courses — and therefore take national tests — may be at a disadvantage if their teacher does not teach climate change. This is the case for some of Hastings’ students.

“I also teach Advanced Placement Environmental Science, where (climate change) is a required element and included on national tests,” he said.

Mamie Brubaker, who also teaches science at SHS, said this is a issue she is passionate about.

“It is my understanding that the vote by the House committee to remove certain ‘controversial’ language doesn’t prevent a teacher from teaching it, but it continues to undermine equitable science education and career opportunities for all our students,” she said. “Removing significant components of the standards, which were developed by a diverse team of experts, not only puts our students at a disadvantage, it shows a lack of support for our science teachers.”

The Senate Education Committee is likely to vote on the proposed standards next week.