In the 18th-century English court of Queen Anne, it pays to watch your back, even if you think you’ve reached the top. 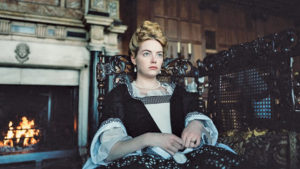 Such is the situation for Sarah Churchill (Rachel Weisz), the queen’s confidant and clandestine lover, in director Yorgos Lanthimos’ new film “The Favourite.” Secure in her position as Queen Anne’s (Olivia Colman) most trusted courtier, Churchill wields immense influence over the nation through her close position to the crown. She finds her status challenged, however, when her impoverished cousin (Emma Stone) arrives at court seeking employment.

Yet another hilarious, gripping and insightful film from Lanthimos, who is quickly building a reputation as one of the world’s most acclaimed filmmakers, “The Favourite” stands among 2018’s most praised and award-nominated films. Local residents can watch the drama and comedy unfold for themselves when the Panida and the Sandpoint Reader present “The Favourite” as the latest in their Reader Reels film series. Show times are set for 7:30 p.m. tonight — Thursday, Jan. 31 — as well as 5:30 p.m. Friday, Feb. 1, and 3:30 p.m. Sunday, Feb. 3.

Over the course of his filmmaking career, Lanthimos developed a keen eye for dissecting human relationships across a variety of cinematic genres. His satire about dating and relationships, “The Lobster,” was a previous Reader Reels selection. Lanthimos ventured into more disturbing territory with his next film, the horror-thriller “The Killing of a Sacred Deer,” which centers on the mysterious connection between a well-to-do doctor and a manipulative teenage boy.

“The Favourite” takes Lanthimos’ penchant for offbeat humor and puts it in 18th-century England, making it his first period piece. It proved to be a winning combination for the Academy, which nominated the movie for 10 Oscars. Coincidentally, co-stars Stone and Weisz find themselves in a similar rivalry to that of their characters, this time competing for the Best Supporting Actress award. Colman is nominated for Best Actress, rounding out the performance nominations. The film is also nominated for Best Picture, Best Director, Best Original Screenplay, Best Cinematography, Best Production Design, Best Costume Design and Best Film Editing.

Does “The Favourite” deserve to win the Academy’s heart when the Oscars take place on Feb. 24? Come check out the film this weekend at the Panida Theater and decide for yourself.